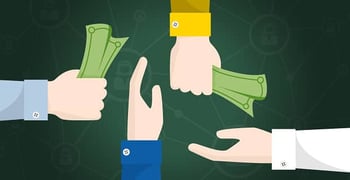 The Internet has a track record of cultivating uncanny new technologies that challenge markets, playing the role of democratized Davids to challenge the corporate Goliaths.

Consumer lending, too, has seen significant changes in the past two decades thanks to the Internet, the most important event being the rise of peer-to-peer lending, or the process of individuals funding loans for other individuals without the intervention of a middleman.

I spoke with Haas School of Business Assistant Professor of Finance Adair Morse about her latest paper, “Peer-to-Peer Crowdfunding: Information and the potential for Disruption in Consumer Lending“.

How big is peer-to-peer lending?

By the end of 2013, the five largest peer-to-peer lending institutions (Funding Circle, Lending Club, Prosper, RateSetter and Zopa) had nearly $3.5 billion in outstanding loans, according to Fitch Ratings — a mere drop in a bucket compared to their estimated (and not unlikely) $114 billion potential.

According to data gathered from Lending Club, 85.8 percent of all P2P loans generated in the first quarter of 2013 were for borrowers looking to manage their credit card debt or to consolidate existing loans.

What’s attributing to this business model’s success and popularity? Investors have been able to turn a profit from debt-related investments like asset-backed securities and bonds for decades and borrowers have had access to personal loans and credit for even longer. So why P2P?

The answer may lie in disintermediation or the removal of various layers and players who receive a cut of the profit from the loan itself. In other words, P2P loans help cut out the middleman.

“Work by Thomas Philippon of New York University establishes that, going way back in time, financial intermediation costs about 2 percent of the funds invested. What happens when investors can skip the intermediary by reaching those needing funds directly?” Morse said. “The answer is pretty straightforward. Either the investor, the borrower or both should be able to capture the benefit. In the case of P2P, the platform itself is a form of an intermediary, so we have to consider the platform capturing some of these benefits as well.”

How does peer-to-peer lending work?

You may be familiar with crowdfunding or social finance, the concept where individuals pool money together to help fund a particular person, product or project. Think Kickstarter or Indiegogo.

Thanks to the rise of companies like Prosper and Kiva, individual consumers can now be lenders, a role traditionally held by banks, credit unions and smaller operations (such as payday lenders).

Typically those aforementioned institutions use information from the three major credit bureaus — Transunion, Equifax, and Experian — during their underwriting process. While credit scores do play an important role is borrower risk assessment for social financing platforms, Morse points out that the process is a little different.

“In P2P platforms, prospective borrowers can write publicly-observable commentaries to convey personal soft information (demographics, economic conditions, context for the loan, etc.), while in the process hoping to build an emotional tie to the investor-lender,” she writes.

One of the key benefits here is people who might have a limited credit history or a less-than-sterling record, could theoretically have access to credit when they would otherwise be denied by banks and more traditional lending institutions.

Once a lender-investor finds deems a prospective borrower a worthwhile investment, he or she submits funds to their loan and, assuming the loan’s funding goals are met, the lender-investor begins recouping his or her funds with interest.

Soft information is an umbrella term that encompasses data not readily available in credit reports such as demographics, the need for the loan and the financial characteristics of the borrower’s social network and physical neighbors.

“Social circles and local economic indicators can inform credit risk,” Morse writes. “Big data presumably can play more of a role in credit profiling, which will imply a lower cost of credit on average. As this happens, we need to watch for anti-competitive effects if personal information monopolies become important in informing credit risk.”

But Morse said there are two “looming” concerns here.

“First, of course, is privacy,” she said. “We already know that credit scores can affect job prospects, for example. Second, which surely is going to become an issue for regulators, is profiling and discrimination. If social networks and geographic information is used to approximate individual credit scores, surely this sort is going to disfavor minorities and achievers living in low-income areas.”

What does the future hold for the consumer credit market?

There’s a general assumption among many leaders of the finance community that credit cards are on their way out. For example, venture capital firm Andreesen Horowitz and American Express’ CEO Ken Chenault have made it clear they think there’ll be a day when the digital wallet will replace the physical.

And, when that day comes, there’s also a high probability we’ll see something akin to a financial singularity when it comes to how we consume, spend and take on credit.

“Financial institutions are trying to experiment (in a good way) with startup ideas and startup companies to learn how consumers respond to convenience of different holdings of money or credit obligations,” Morse said. “It is not clear what digital currency looks like in the future, but it is clear that the lines between consumption, credit, and payment will blur.”

For more information, read “How Big Data and Credit Law Could Reinforce Inequality” and “The Consequences of Using Social Network Data for Credit Scores“.