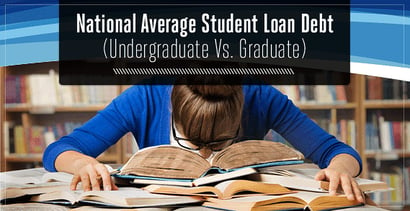 While we’ve all heard the student loan horror stories, the truth of the matter is that loans remain one of the most effective — and, for some, the only — ways of paying for college. In fact, according to The Institute for College Access and Success (TICAS), about 7 in every 10 people who graduated from public and nonprofit colleges in 2015 carried student loan debt with them across the stage.

For many of us who choose higher education, the only real choice is to make peace with our student loans. The best way to do that is to do the right research, so you’ll know what you’re getting yourself into — before you sign on the dotted line. Becoming an informed borrower can make all the difference to your student loan experience, starting with how much you’ll likely end up owing upon graduation.

Looking at the numbers for the cost of a college education can be scarier than a horror film. A four-year degree, at a public college, will run a whopping $9,410 a year — and that’s for in-state students; double that if you’re an out-of-towner.

For graduate students seeking a master’s degree or doctorate, the numbers can get way scarier than those faced by undergraduates. Not only are you adding more money on top of your undergraduate degree, but, depending on what type of graduate degree you go after, you could be doubling or tripling your debt — every year.

This chart from the College Board shows the cumulative college debt of graduate students in 2012 dollars.

The College Board actually found that more than two-thirds of those who graduated with an advanced degree in 2012 carried debt, and about half of those had $40,000 or more in combined undergraduate and graduate debt. The estimated average debt for a master’s degree is a frightening $57,600.

While hardly the only factor in the high cost of a doctor’s visit, the price for a medical degree still is still one of the most expensive. Just one year of medical school can cost between $32,889 and $56,796 — and it usually takes at least four years.

According to the Association of American Medical Colleges (AAMC), an average of 81% of medical school graduates in 2015 were saddled with debt — with 79% of them owing at least $100,000. In fact, the AAMC estimates the average graduate had around $172,751 in education debt when they left medical school, and more than 10% have over $300,000 in debt.

The Cost of Graduating from Law School

While becoming a doctor may cost you more, your law degree won’t be cheap, either; the average law student graduates with around $126,452 in debt. Of course, if you head to a high-end school — or need to finance living expenses — that figure can skyrocket. For instance, going to Harvard for law school will run you $178,650 in tuition alone.

How to Lower Monthly Payments for Student Loans

Approximately 11% of borrowers were delinquent on their student loans by 90 days or more in the second quarter of 2016, according to the Report on Household Debt from the Center for Microeconomic Data. Student loans have now surpassed credit cards as the greatest source of delinquent debt.

With so many people carrying debt, it comes as little surprise that many have trouble maintaining their payments after graduation. Repayment amounts vary by loan type and amount but average between $200 to $400 a month.

Most student loan payments will average between $200 and $400 per month.

If you’re having trouble keeping up with high student loan payments, you may need to consider refinancing your loans through a reputable lender like Credible or SoFi. Refinancing, the process of taking out a new loan with a low interest rate to pay off a loan (or loans) with a higher rate, can lower your monthly payments when done properly. Make sure to do your research before taking on a new loan.

Is College Worth the Cost?

If you’re one of the 7 in 10 people carrying student loan debt, you may find yourself asking (on more than one occasion) if your education was actually worth all of that debt. The short answer? Yes.

A paper released by the Federal Reserve Bank of San Francisco found that the average college graduate could break even on their education by age 40, going on to earn an additional $800,000 more by retirement than an average high school graduate. College can be especially lucrative if you pick an in-demand field, like technology or medicine; graduating with an engineering degree, for instance, could net you $60,000 or more at your first job.

How to Live Debt-Free in College