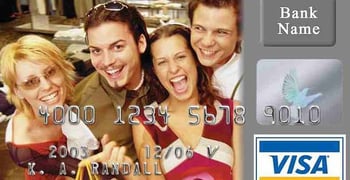 It seems like common knowledge we should avoid debt. Each generation goes through the process of accumulating debt, struggling to pay it off and then trying to pass the lessons they’ve learned on to their children.

But we continue going through the same cycle of learning our debt lessons the hard way, or so it seems.

A study performed in 2009 found more than 75 percent of college students had four or more credit cards in their name. Many of these students received offers in the mail based on preapproval.

The credit card companies are eager to sign up students as early as possible, and these offers typically start arriving right around the student’s 18th birthday.

“A study found more than 75 percent of college

The reason college students are targeted so fiercely is rather easy to understand. Students who accumulate a bit of debt on their card and can only make the minimum monthly payments will generate a large profit for the banks.

They’re also far more likely to keep and continue using a card they received at an early age.

The CARD Act, put into effect in 2009, now prohibits students from applying on their own until they’re 21 or older. Those who don’t have a cosigner won’t have a credit card.

This is expected to reduce the predatory practices made by many banks, protecting students from accumulating significant portions of credit card debt early in their lives.

Students should consider getting a credit card as soon as possible, but they must be sure to clear their balance every month.

There is nothing inherently wrong with having four cards, as long as the balances are being paid off regularly. This would actually lead to a much improved credit rating.