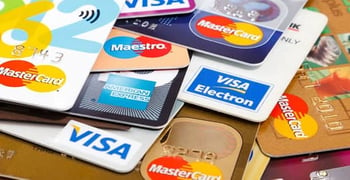 Unfortunately that is just a 1 percent decline when compared with Q1 of 2013. This means the rate at which we’re paying off our debt is noticeably slowing.

The study projected that 2014 will end with a net increase in credit card debt of nearly $42 billion – an increase of 8 percent over last year and 14 percent higher than 2012.

Perhaps the lessons of the Great Recession are wearing off, people are simply getting tired of being frugal or they have more financial confidence to continue carrying debt.

Prior to the financial meltdown, Americans held a record amount of consumer debt – around $12.68 trillion at its peak in 2008. From 2009 through 2011, however, they paid down debt at a record level.

Now those pay-downs seem to be leveling off, and debt loads are increasing once again.

Rounding out the study was another factor that may indicate the return of bad habits. Charge-offs and defaults among consumers seem to have bottomed at a rate of 3.32 percent, down just .3 percent from 2013, and may soon begin to rise.

Total charge-offs are expected to come in at $30.53 billion for all of 2014. This could lead to a significant credit crunch, according to the study.

The Great Recession hit most Americans pretty hard. We’re still recovering and getting back the household net worth we had six years ago.

But if there’s a silver lining to the near disaster we experienced, it’s that we’re more aware of our debt and spending habits than we were before.