How Many Americans Have Bad Credit? 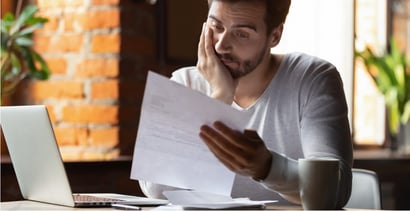 Your credit reports and credit scores are immensely important because they control your access to, and the pricing of, extensions of credit. Consumers who have good or better credit scores have access to competitively priced credit from an almost limitless number of mainstream lenders.

On the other hand, consumers who have average or bad credit will find their credit options are limited and more expensive. This article explores the definition of bad credit and how many American consumers have what is considered bad credit.

16% of Americans Have Bad Credit

Approximately 16% of Americans have bad credit, according to Experian data.

What the Experian data indicates is that more people have very good credit scores than have bad or subprime credit scores. This may come as a surprise to some, but most people in the U.S have pretty good credit.

While there are some general and common perceptions about what makes for good credit versus what makes for bad or subprime credit, the final determination is really up to your prospective lenders.

On the other hand, credit card issuers, such as WebBank, do have products tailored for consumers who have subprime or bad credit. In fact, your “bad” credit is not really bad in their eyes. American Express and Credit One have different levels of tolerance for good and bad credit.

Does Being Denied Mean You Have Bad Credit?

What if you apply for credit and are denied? Does that mean you’ve got bad credit?

If that’s the case, then 23% of credit applicants in 2018 have bad credit because they were denied, according to a 2019 report by the Federal Reserve. And, 31% were either denied or countered with less attractive alternatives.

The statistics were about the same in 2019. Twenty-four percent of applicants were denied credit and 31% were either denied or were offered less attractive terms, according to the Federal Reserve.

Being denied credit, however, doesn’t always mean you’ve got bad credit.  You can be denied credit for a variety of other reasons.

The common and standard credit score range for both FICO and VantageScore branded credit scores is 300 on the low end and 850 on the high end. The higher you score within that range, the lower a credit risk you pose to current and prospective lenders.

The average score doesn’t move much over time because there are so many consumers who have credit scores.  Even the financial meltdown of 2008-2009 didn’t have much of an impact on the average FICO score. The average between 2007 and 2011 varied from 686 to 689, a whopping three points.

Certainly, having a statistically average score isn’t good or bad, it’s just average.  But, according to FICO, you’re going to need a much higher score to qualify for the best deals lenders have to offer.

For example, as of November 2020, the average mortgage loan APR for a 30-year fixed-rate mortgage loan was about 2.4%, which is about as low as it has ever been. But you’re going to need FICO scores at or above 760 to earn that rate.

You’re going to need a score of greater than 760 to increase the likelihood of being approved for the best deal lenders and credit card issuers have to offer.

Having said that, I don’t think anyone would reasonably consider scores anywhere in the low 700s to be bad credit scores. On the contrary, scores in the 700s are generally considered to be good or better.

Scores below approximately 670 are considered to be subprime. Subprime is a lending term that indicates an excessive or unacceptable amount of credit risk. People who have subprime credit may be denied for credit or otherwise will pay more in interest and fees to subsidize their level of risk.

Consumers who have credit scores in the lower 600s and even into the 500s are considered a bad credit risk, perhaps too bad for mainstream creditors. Scores this low are getting into the lowest scoring percentiles nationally.

These consumers typically have credit reports that include recent derogatory information, such as late payments, a record of defaults, collections, and public records.

Is No Credit Considered Bad Credit?

Some so-called consumer finance gurus would have you believe that you are better off not having credit reports, credit scores, credit cards, or any other form of debt. If you choose to live off the credit grid then that’s certainly a personal choice.

If, however, you are committed to living a credit-free life, then you are or will become what the Consumer Financial Protection Bureau calls credit invisible.

Being credit invisible is either having no credit report or a limited or thin credit file. Some 45 million consumers met this definition in 2015, according to the CFPB.

No credit isn’t considered to be bad credit. No credit means just that…you have no credit. But, having no credit can be a reason for lenders and credit card issuers to deny applications.

Having no credit reports would cause you to fail the minimum credit scoring criteria of both FICO and VantageScore, which means nothing other than an “unscorable” code would be returned to the lender.

You can certainly be denied credit for not having a credit score, but you can also be denied for having no credit reports or even credit reports that contain limited information. Many lenders and credit card issuers prefer you have some amount of credit experience under your belt before they will approve an application.

What Can I Do About My Bad Credit?

How to Freeze Your Credit

A Simple Guide to 5 Popular Types of Loans

What Does It Mean to Be a Risky Borrower?