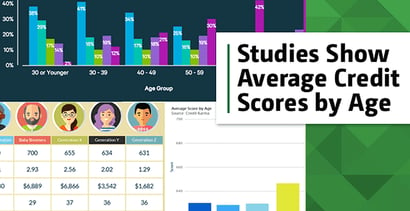 In personal finance, credit scores are what make the world — or, at least, the lines of credit — go ’round. So it’s small wonder that, no matter how high (or low) your credit score, chances are you’ve found yourself wondering exactly how your score compares to everyone else’s.

The national average credit score is hardly the whole story, however. When you dive further into the numbers, trends in the data appear. In particular, it seems that with age really does come wisdom — credit wisdom, at least. The data from several studies actually show that our credit scores seem to increase as we age.

Credit Scores Tend to Be Generational

One of the strongest trends visible in the ValuePenguin data, made obvious by the graph below, is the correlation between age and credit score. While not always predictive — averages are, by nature, not all-encompassing — the data shows a clear increase, by age, of not just the average score, but the portion of the age group with higher scores.

And the ValuePenguin study isn’t the only one to demonstrate the connection. CreditKarma’s Credit Trends graph also shows a noticeable increase in average credit score as age increases, with the average credit scores of those 45 to 52 nearly 20 points higher than those 44 and under. What’s more, those 55 and up have significantly higher scores, a full 45 points higher, than younger consumers.

The Experian State of Credit 2016 Report showed a significant correlation between generation and average credit score.

The youngest among us, those falling under the moniker of Generation Z were generally born in 1996 or later. Many of these young people are new to the credit game, with an average of 1.29 credit cards each and a low $1,682 average credit card balance.

Perhaps due, in part, to their limited credit experience, this generation has the lowest average score, coming in at 631. While this lands them firmly in the “poor” range of VantageScore credit scores, these tech-savvy youngsters have the lowest average debt with just $14,446.

Also known as the (much-maligned) “Millennial” generation, those from Generation Y were born roughly between 1982 and 1995. Now in their 20s and 30s, Generation Y has officially overtaken Generation X as the largest segment of the workforce. They’re also the largest generation, surpassing the Baby Boomers by half a million people.

Unfortunately, that honor doesn’t seem to have helped their average credit scores, however, as Generation Y is just a few points above their younger associates. Averaging 634 on the VantageScore scale, the millennials also have “poor” credit. They also have well more than twice as much debt as Generation Z, averaging $32,698 a person.

Generation Y has officially surpassed Generation X as the largest segment of the working population.

Generation X is the youngest generation to pull itself out of the “poor” credit category, with the average score of 655 placing members well into the “fair” region. That said, while their increased credit knowledge may have helped boost their scores, the average Generation X consumer needs to be careful — they tend to carry around $6,866 in credit card debt and have the highest revolving utilization.

By far the largest generation until their children — and grandchildren — the massive Generation Y, surpassed their numbers, the Baby Boomers were born between 1947 and 1966. While still making up a fairly significant portion of the workforce, many of the Baby Boomers are (or should be) thinking about preparing for retirement.

With so much experience (credit and otherwise) under their belts, the Baby Boomers have finally made it to “good” credit status, with an average score of 700. This is true despite the fact that they carry the highest debt loads, both on their credit cards and overall — and have an average of 2.93 credit cards apiece, the highest number of any generation in the report.

Many of those in the Silent Generation, born between 1925 and 1946, were young during the Great Depression. Today, the majority are most likely retired and dealing with a new range of concerns — such as increased health care needs.

With so much evidence of the correlation between age and credit score, it begs the question — why? Is there some inherent aspect of credit scores that biases based on age? The answer is a resounding “yes.”

For starters, simply trying to establish your credit history can be difficult, as many young people — such as those in Generation Z, perhaps — are bound to discover. You often need credit to get credit.

In fact, it could be argued that most aspects of credit score calculation are impacted by an individual’s age. This includes major factors in both FICO and VantageScore calculations, including the age and type of accounts on your report.

As its name implies, the average age of accounts used in determining your credit score looks at the age of each credit account on your report and averages them. Some models may look at how long it’s been since you used certain accounts, as well.

In general, the longer you’ve been using credit, the better your average account age will be. This is why most personal finance guides will advise you against closing old accounts or credit cards after paying down the balances — older accounts (in good standing) look, well, good on your credit report.

How? Well, the length of your credit history counts for a full 15% of your FICO credit score calculation. Given that time is the only thing that can improve your average account age, the older generations have a serious credit score advantage here.

The Facts of Life

Another key place it pays for your credit report to be a little more… lived-in? Your credit mix, or the variety of credit types you have on your report. While it’s all well and good to have a few credit cards — provided you pay them off on time every month — creditors like to see a few different flavors in the mix.

Indeed, when your FICO score is calculated, your credit mix — or lack thereof — will count for 10% of your credit score. Unfortunately, for many of those in Generations Y and Z, life simply has yet to provide a lot of motive, means, or opportunity for them to take on a wide range of credit types. Beyond the one to two credit cards they average, these young folks aren’t sporting a lot of variety in their reports.

Those who have spent more time dealing with the facts of life, on the other hand, such as the working parents of Generation X and the Baby Boomers, are another story. As their incomes and families have grown, these consumers have not only obtained a larger variety of credit cards, but also have taken on auto loans, mortgages, personal loans, second mortgages, business loans, and lines of credit.

Along a less frivolous vein, the Experian and ValuePenguin studies found interesting trends in credit score around both location and income. These points may show symptoms of larger issues based on regional or socioeconomic policies.

This map from the Experian study shows the highest average credit scores all occur in the Midwest, and the lowest average scores are found in the South.

According to Experian’s report, the 10 cities with the highest average credit scores were all found in the Midwest states of Minnesota, Wisconsin, and North and South Dakota. Furthermore, the top three cities were all in Minnesota, with the major metropolitan of Minneapolis coming in third. Of the top 10 average scores, nine were 700 or above, putting these cities into the “good” credit range.

On the flip side, those cities with the lowest average scores are all Southern cities, with the lowest credit scores occurring in Mississippi, Georgia, Texas, Louisiana, and Southern California. With the highest of the low scores coming in at 640, everyone on this list is solidly in the “poor” credit range.

And the ValuePenguin study had strikingly similar findings. Not only did the highest score again occur in Minnesota, but ValuePenguin found Mississippi to have the lowest average credit score, as well. The study also found a variety of Southern states, including Texas, Mississippi, Georgia, and Nevada, to have populations in which 40% or more of people were considered to have subprime credit scores.

The second area of coincidence may be less remarkable than it is predictable: those with lower incomes tend to have lower average credit scores. How much lower? The ValuePenguin study found those whose income was less than 50% of the median family income (MFI) had average scores 52 points lower than the next highest bracket of 50% to 79% MFI.

Scores continue to increase as income increases, though the point jumps are smaller; from moderate to middle incomes, average scores increase 37 points, and the scores increase only 22 points from middle- to upper-income levels. However, this still means a point jump of 111 between the lowest and highest income tiers.

When it comes to building a solid credit history — and, thus, a good credit score — it definitely appears that the average American has a thing or two to learn; the typical 673 credit score is only “fair” on the VantageScore model’s scale. But there is hope to be had. The results of our three studies seem to concur on one thing: credit scores, like delicious cheese, get better with age.

Even better, it actually gets easier to score well on several aspects of your credit score, including account age and credit mix, as you age (unlike, well, most other activities). So, if you’re in an end-of-the-alphabet generation and fighting with your credit score, you can find solace in the fact that the odds say it’ll only go up from here.

Study: How Much Will Paying Off Credit Cards Improve Score?