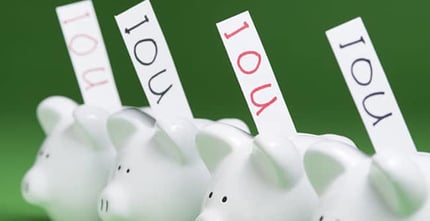 The American and Canadian economies have always been pretty closely tied to each other. For this reason, it should be no surprise that consumer debt is slowly on the rise in Canada, just as it is here in the U.S.

A new study by the credit reporting agency TransUnion shows the average consumer debt load in Canada, excluding mortgages, increased by $225 in the third quarter to $27,355.

The study also showed Canadians have a relatively low delinquency rate, indicating they are doing well in managing their increased debt levels.

The modest increases in debt levels were not reflected in two of the country’s largest cities, Toronto and Vancouver, which both saw declines in average consumer debt levels.

may be fueling new consumer debt.”

The biggest increases appear to have come from the provinces in the central and western parts of the country. Saskatchewan and Alberta showed the largest increases in average debt levels at 15.49 percent and 7.46 percent, respectively.

Although the study did not look at increases in income levels, the central and western provinces of Canada are experiencing economic growth due to the increase in oil and gas production.