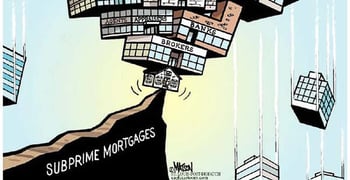 Wall Street made problems even worse by investing a large amount of money in new investments based on housing loans. This caused some to wonder if bankers may have seen the crash coming and misused this information to make a profit.

A new study out of the University of Michigan and Princeton seems to suggest the opposite. Bankers not only didn’t profit off the market crash, they actually came out worse than other investors.

The study looked at the housing investments of 400 mid-level managers in the securitization departments of banks – people that understood housing trends and the new Wall Street securities well.

The researchers looked at whether these managers were buying or selling homes during the bubble.

“Bankers not only didn’t profit off the

During this time, the managers as a group were buying up properties. Many took on a second home as an investment or upgraded to more expensive homes.

As a result, they took a big financial hit when the market eventually crashed.

This is strong evidence against the theory bankers knew a crash was coming. If they were aware of the problems with subprime borrowing, these managers would have been looking to sell.

In fact, this group did worse than a control group of equity analysts and non-real estate lawyers – people in a similar income bracket that weren’t as close to the housing market.

It seems Wall Street was just as caught off guard by the housing crash as the rest of the country.

While Wall Street’s actions likely made problems worse, it seems they acted out of misinformation like everyone else rather than bad intentions.