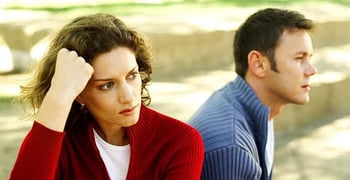 As our economy continues to slowly improve from the effects of the Great Recession, most of the news is good. However, one disturbing trend has begun to show up.

According to a recent study by the National Marriage Project, divorce rates have risen now for the second straight year.

Divorce rates fell in 2009 through 2011, when about 150,000 fewer divorces took place. The National Marriage Project called it a “silver lining” to the economic hard times.

“As the economy has continued to

improve, divorce rates are on the rise.”

One reason given for the temporary drop in the divorce rate is couples simply didn’t have the resources to move forward with divorce.

According to sociologist Andrew Cherlin, of Johns Hopkins University, “This is exactly what happened in the ’30s. The divorce rate dropped during the Great Depression because people couldn’t afford to get divorced.”

Now that the economy seems to be doing better and people aren’t as worried about losing their jobs, couples who have put off their divorce are moving forward with it.

According to Cherlin, “Downturns in the economy seem to affect the timing but not whether couples divorce.”

In another twist, divorce lawyers in Los Angeles have reported that even couples who divorce may still share a household to save money.

It seems that until the high cost of living is repealed, couples will still struggle financially.