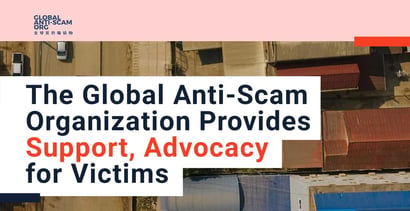 In a Nutshell: Opportunities for romance and relationship-building abound online. But people searching for connection or opportunity open themselves up to exploitation when they trust someone without verifying their identity. The Global Anti-Scam Organization (GASO) offers information and support to help protect individuals from scammers who are willing to invest months to build trust before they make their move. As a donation-supported nonprofit, GASO helps prevent exploitation through education, offers community support to scam victims, and advocates for stronger legal and institutional protections.

The Global Anti-Scam Organization (GASO), a donation-dependent nonprofit, exists to dispel that notion. GASO assists and supports scam victims, educates the public about the dangers scammers pose, and works with law enforcement globally to bring scammers to justice and rescue the exploited.

A team of about 70 dedicated volunteers operates Singapore-based GASO. Their collective experience shows that people from all walks of life are susceptible to online exploitation. Individuals of all ages, incomes, and educational levels may get entangled in situations they can’t get out of until it’s too late.

One such victim was GASO’s founder. She fell prey to an increasingly prevalent scam known as the romance- or relationship-investment scam. In this type of exploitation, which arose around 2019, scammers spend months befriending individuals and build their trust so they deposit their money in spurious businesses or investment schemes.

GASO’s founder met someone online who communicated with her for months, using various tricks and ploys to convince her to invest in a fraudulent scheme. The relationship was romantic, and the scammer employed sextortion techniques that brought shame and led her to attempt suicide.

As she recovered with the help of an online support group, she vowed to do what she could to prevent romance-scam exploitation of others. As of April 2022, GASO has helped nearly 1,500 victims worldwide who have suffered $256 million in losses — an average of $172,000 per victim.

“We’ve realized that everybody is a potential victim,” said Grace Yuen, a Volunteer Spokesperson for GASO. “Because we’re all human, we’re all vulnerable to the emotional manipulation and patient grooming prevalent in scams.”

Shāzhūpán: An Industry of Exploitation

The experience of GASO’s founder typifies that of thousands of victims worldwide, including in the US. According to the FBI, 24,000 US residents reported collectively losing about $1 billion to romance and relationship scams in 2021.

Perhaps because of cultural conventions around shame and family expectations, these long-term frauds based on romance and relationships arose in Asia, predominantly in China. They’re known as shāzhūpán, a Chinese word that translates into English as the “pig-butchering” scam.

That vicious metaphor refers to how farmers nurture and protect livestock to make the animals more valuable at slaughter. In the pig-butchering scam, fraudsters develop long-term relationships with their victims and groom them to become interested in investing in cryptocurrency, forex, gold, or other assets.

After the scammers determine their victims are susceptible, they may teach them how to invest and even allow them to make a profit and withdraw some funds. But the goal is always to get them to invest more the next time.

Because shāzhūpán/pig-butchering scams are romance-investment scams, they combine aspects of both traditional romance scams (where scammers beg their victims to help them out of financial jams) and investment scams (where scammers appeal to the target’s sense of financial betterment or greed). In the romance-investment scam, the victim never realizes that the scammer and the investment platform that the scammer “recommends” or claims to use, are on the same side and in cahoots with each other to swindle the victims. That’s because the scammer masquerades as a love interest or trusted friend, a relationship that they cultivate with targets over time through pickup artistry and emotional manipulation.

The scammers are successful because, essentially, they defraud for a living. When the Chinese government began to crack down on shāzhūpán following mounting financial losses among Chinese nationals, scammers migrated to Southeast Asian nations, including Cambodia, Laos, and Myanmar, where kingpins are protected by governments that benefit from the corrupt money they bring in.

“We regularly have victims who come to GASO reporting losses in the millions, Yuen said. “Everybody’s human, and if the scammer can exploit them, they will.”

According to GASO, scam victims worldwide lose an average of $121,926. Women aged 25-40 comprise 67% of victims. Up to 32% have graduate degrees, and 41% met their scammer on Facebook, Instagram, or WhatsApp as opposed to a conventional dating site such as Tinder or Match.com.

In other words, scammers are everywhere their victims are, ready to spend countless hours grooming them for the final event. Supervised teams that work in sweatshop environments interact with many potential victims a day, working long hours for a small cut of the profits.

There are even scammer playbooks and scripts for fielding questions and handling problems. If a situation isn’t in the playbook, workers may hand the call off to their supervisor.

“Supervisors teach that there is no ‘unscammable’ person, only scripts that don’t fit,” Yuen said. “They strive to find everybody’s weak point.”

Many experience confinement after applying for what they think is legitimate work. Some may pay for the opportunity to earn a little money. Offers of free travel and accommodations lure others. Their employers eventually confiscate their passports and restrict their movements.

GASO has partnered with journalists and organizations to rescue human trafficking victims. One young victim from Taiwan recounted emotional abuse and onerous redemption fees for getting out of signed contracts. His parents’ dedication and GASO’s meticulous work with its partners resulted in the young man’s extrication.

“People with guns guard the compounds they live and work in,” Yuen said.

Shāzhūpán, the pig-butchering scam, reveals the extent to which today’s scammers will go to con their marks and take their money. Today, the old Nigerian prince scam is a legend in internet history, and the public regards it as hopelessly superficial and humorous. GASO’s goal is to reduce shāzhūpán to the same level.

But there’s a long way to go before that happens. As long as people seek romance and financial opportunities online, scammers will be there, ready to strip them of their dignity and money.

A message from GASO’s founder posted on the website describes her horror upon realizing that she had been taken in by a scam she would have ridiculed before she became a victim herself.

“I became yet another pig that got butchered,” she wrote.

Donations help GASO extend its work. The GASO site offers a 24/7 live chat staffed by committed volunteers to assist individuals who think they may be victims. It provides peer support and community features via social media channels, including Facebook, Instagram, Reddit, and Twitter.

An extensive collection of articles on the GASO website keeps readers informed about the latest permutations of the pig-butchering scam and other common fraud methodologies. GASO also maintains a list of scam websites and provides cryptocurrency recovery services to those who have lost their coins to scammers.

And in addition to partnering with charities and nongovernmental organizations to rescue scam victims, GASO works with law enforcement agencies to bring human traffickers and cybercrime criminals to justice.

GASO volunteers also practice a skill known as scam baiting, in which they turn the tables on known scammers.

“We have people talking to scammers partly to waste their time, but it’s essential for gaining intel,” Yuen said. “It’s a continual cat and mouse game.”

Rippleshot Detects Card Fraud for Banks and CUs