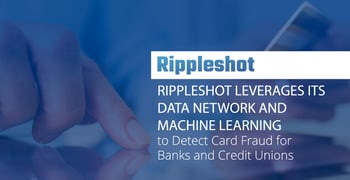 In a Nutshell: Smaller financial organizations are often more vulnerable to data breaches because their limited amount of customer data is less predictive, and their resources are more limited. That’s why many of those smaller financial institutions partner with Rippleshot to secure their networks. Rippleshot uses its proprietary data network that relies on sophisticated algorithms powered by AI and machine learning to proactively detect location-based fraud early on. That means customers banking with local financial institutions that leverage Rippleshot can keep their money in their community while maintaining their peace of mind.

Financial institutions large and small all have the same desire to protect their customers from fraud. Card skimming at ATMs and gas stations, for example, remains an effective way for thieves to steal credentials that can be sold on the dark web. And criminals continue to compromise accounts and even create synthetic credentials with brute-force computing power.

And just because financial institutions have the same interest in protecting customers doesn’t mean they all have the same capabilities. The largest U.S. banks command massive user networks and generate enormous amounts of transactional data. And they have the human and technical resources to analyze that data to generate predictive patterns and protect their customers.

Meanwhile, smaller institutions have limited networks and fewer resources. On their own, they can’t generate the same level of insight from their data that the big banks can. But partnering with Rippleshot gives them the security they need to keep customers safe from fraud.

“A big bank has 60 to 80 million cards all across the U.S.,” said Rippleshot Co-Founder and CEO Canh Tran. “So when they do fraud analytics, they use all that data from 60 million cards and look at patterns across the country. They’ll see things earlier than smaller banks. Big data gives big banks a big advantage.”

“Guess which cards sell for more?” Tran said. “The cards from the smaller banks — because the fraudsters know those banks don’t have the sophisticated fraud-prevention systems the big banks have. So the fraud can go on for longer.”

Rippleshot takes a communal approach on behalf of regional and community banks and credit unions to protect its customers from fraud. Working with card issuers and processors, Rippleshot’s Sonar platform pools its data network resources, monitors billions of daily transactions, and uses analytical tools honed from years of experience to proactively detect breaches.

Rippleshot started when its three co-founders realized that traditional credit card fraud detection methods were failing to catch the more than 50% of cases that were due to purchase location fraud. In those cases, numbers may be stolen and used from anywhere in the world.

“Somebody puts some malware or a skimmer in a POS system, and all the credit card numbers are harvested and sold in the underground market,” Tran said.

Rippleshot fights back against that organized criminal activity, which is responsible for millions of stolen credentials each year.

“We saw this early on before the trend got big,” Tran said. “Using big data and machine learning, we could detect these locations.”

Rippleshot clients often learn about the subtle changes in normal activity that indicate credentials have been stolen well before any significant impact occurs.

Each day, Rippleshot Sonar provides clients with a refreshed list of compromised locations and cards. That includes a “card fraud score” that shows the probability of a card being used fraudulently over a period of time. Sophisticated algorithms allow Rippleshot clients to use the fraud score to issue new cards for maximum security.

“When one of our processor partners tells us that Community Bank of Main Street has just signed, we can get that client up and running in two weeks,” Tran said. “Through our partnerships, we already have the data pipes ready to go.”

Institutions looking to integrate directly with Rippleshot without those partnerships in place can take up to three months or more. That’s because Rippleshot analyzes all relevant aspects of the institution’s internal organization to ensure Sonar works efficiently and compliantly.

“We need to work directly with the IT teams to tokenize and secure their data,” Tran said. “That gives you a sense of the scale of our onboarding.”

“We pride ourselves on that. Regardless of whether it’s through our partnerships or with direct clients, we believe that our competitive advantage lies in our culture. Our customer success team help each client achieve their goals. And we’re there to consult with them every week.”

Rippleshot offers regional and community banks and credit unions a level of fraud protection that allows them to compete against massive banks. Smaller institutions rely on Rippleshot’s expertise and commitment — one even got a taste of that treatment before it was officially a client.

Tran recalled one financial institution that called Rippleshot while the company was moving its offices.

“We’re packing up, and they call us and say, ‘Hey, we just got hit with some ATM compromises. We know you guys do this stuff, and we know we’re not clients yet, but could you help us?’” Tran said. “While we were moving, we took two hours to return the information they needed. Not only were we right, but it also took the institution a month to recreate what we gave to them in two hours. That tells you about the kind of service we provide.”

For Rippleshot’s clients, it all adds up to a proactive approach to fraud protection that could not work as effectively if they were all operating separately.

“We tell our clients, your data alone is not enough to detect useful patterns,” Tran said. “But combine your data with all the other banks, credit unions, and data processors that are part of our network, and you have a huge data set that surfaces those patterns.”