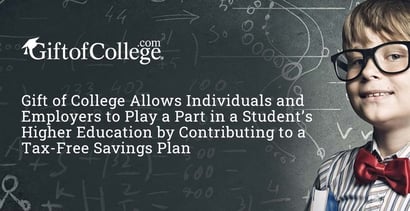 In a Nutshell: Gift of College allows anyone to contribute to college savings plans and student loan accounts for past, present, or future students. The company is also on a mission to inform students about 529 plans, which are tax-advantaged investments that help fund future educational expenses. Gift of College offers proprietary gift cards that can be applied to any 529 plan or student loan account linked to a user profile. And those cards are gaining traction among employers, who include them as part of employee benefit and reward packages.

Many people aspire to be the cool aunt or uncle who gives the best gifts for holidays and birthdays, and Wayne Weber was no exception. But one December, as he stood in the crowded aisles of a toy store, he decided he wanted to give something more valuable than a toy his nieces or nephews would soon outgrow.

He wanted to see them graduate from college financially independent rather than laden with debt.

But Weber’s altruistic efforts ended up being an exercise in frustration. He found it awkward and counterintuitive to contribute to the 529 college savings accounts of his nieces and nephews. He knew there had to be a better way.

“It was cumbersome,” said Weber, Founder and CEO of Gift of College, a platform that makes it easy to contribute to a student’s education or loan debt. “At the time, there were already baby registries, wedding registries, and crowdfunding sites for many different things. We decided this could be a lot easier. So, we made a crowdfunding-for-higher-education site that allows friends and families — and now employers — to contribute.”

Gift of College lets friends, family, or anyone else support a college fund for a prospective student or help graduates and current students pay down a student loan. The platform helps alleviate financial troubles and pave the way to debt-free degrees for aspiring scholars.

529 Plans are Tax-Advantaged Investments for College

529 plans, or qualified tuition plans, as they are also called, are tax-advantaged investments. Income earned within the plan isn’t taxed as long as the funds go to pay for higher-education costs. Those expenses include tuition, books, room and board, computers, and other college essentials.

“I would consider 529 the most popular way to save for college, though, based on a recent national survey conducted by Gift of College, more than 65% of Americans don’t know what they are,” Weber said.

529 plan funds can apply to any accredited college, university, trade school, or apprenticeship program, but the structure of individual plans can be quite diverse. Plans are sponsored by states, agencies, or institutions authorized under Section 529 of the Internal Revenue Code, and these sponsors can build plans as they see fit. However, some universal guidelines can help newcomers orient themselves.

There are two basic forms of 529 plans: prepaid tuition plans and educational savings plans, both of which are covered in detail on the Securities and Exchange Commission’s website. Under prepaid tuition plans, credit hours are purchased at current rates but reserved for future use. The funds saved in these plans cannot go to non-tuition expenses like room and board.

That flexibility is a significant benefit of educational savings plans. On the other hand, prepaid tuition locks in credit hours at the current cost, which is likely lower than it will be 10 or 20 years down the road. Despite the different options, both 529 plans share key benefits, one of which is simply saving money.

“It pays to start early and to automate savings,” Weber said. “The fact is, every dollar you save today is more than $1 that you’re not going to have to borrow and repay with interest down the line.”

Gift of College profiles are free to create and to maintain. Users can link their profile to an existing 529 plan or student loan account. The platform supports more than 90 different 529 plans and connects with nearly 50 different student loan providers. Once a profile is connected to a plan or an account, the user’s friends, family members, and even employers can contribute to paying down or preventing debt.

Gift of College gift cards are how others can crowdfund a student’s college education. The gift cards, launched in 2016, are available at more than 3,000 retail locations nationwide, including Target, H-E-B, Fred’s, Save Mart, and Walmart.com.

And if gift cards aren’t available nearby, anyone can purchase one online. Buyers can purchase digital or physical versions of the cards, and they can decorate a card with an image and even include a custom greeting or message.

“You walk up to that wall of gift cards at a store, and you see 150 or 200 brands. Why the heck was college not on there sooner?” Weber said. “Part of that might be because of the lack of awareness of 529 plans. I think now there are more ideas surfacing because student debt is identified as an economic crisis. And it’s the level of that loan debt, more than $1.6 trillion, that’s shining a light on all this.”

Employers Can Offer Loan Repayments and 529 Contributions as Benefits

Student debt is pervasive in the United States, and Weber said employers are increasingly embracing ways to help their workers pay down debt or save for their children. As a result, Gift of College gift cards are gaining popularity among employers as part of benefits and rewards or recognition packages they offer employees.

Innovetive Petcare, a veterinary management firm, in Austin, Texas, for example, recently added tax-advantaged 529 college savings plans to the company’s benefits package. In March, in addition to launching education on 529 plans and payroll deduction, every new mother and father employed by Innovetive Petcare began receiving a Gift of College gift card with an initial contribution to start their own 529 college savings plan.

And Weber advocates for including Gift of College gift cards as part of benefit packages for a couple of reasons. First, they help to pay down or prevent college debt. Second, but just as importantly, they can increase consumer awareness of 529 plans as a means of reducing the cost of a child’s future education.

College- and debt-oriented benefits also help employers attract and retain talent while reducing the financial stress of employees. That can improve overall mental health, happiness, and productivity in the workplace.

Under a provision in the CARES Act — meant to provide financial relief during the Covid-19 pandemic — employers can contribute $5,250 per year to an employee’s federal student loan account. They can also count it as a tax-deductible business expense, and the employee is not taxed for the contribution either.

“It’s temporary, but we’re hopeful that it becomes permanent,” Weber said. “Prior, as a student loan benefit, if you wanted to give your employee $1,000, you’re paying over $1,100 for that because of the payroll tax. Your employees also pay income tax and all their taxes on it, so they’re not getting the whole $1,000. The CARES Act makes it so that $1,000 is just a business expense for the employer, and the employee gets the entire sum.”

Gift of College: Expanding Access to Education by Reducing the Debt Burden

When Weber contributed money to the college funds of his nieces and nephews, it was his first experience with 529 plans. And many Americans are still unaware that the plans exist, much less that they can provide significant financial advantages for college-bound children.

“Everything we do moves our mission forward: creating awareness of 529 plans and helping Americans with their current debt,” Weber said.

Gift of College’s increasing popularity with employers is also a good sign that the mission is advancing in the right direction. And Weber said he sees other ways that Gift of College cards can reduce collegiate debt now and in the future.

For example, shopping rewards could go directly to a 529 plan or toward a student loan, and mobile applications could make the process easier. Gamification represents another route to growing account balances. Although the approach may change, the goal remains the same.

“As nice and as wonderful as it sounds, we are still in a battle,” Weber said. “It’s a serious battle, and it is absurd that American children have to be anchored to that level of debt to get a higher level of education in America.”