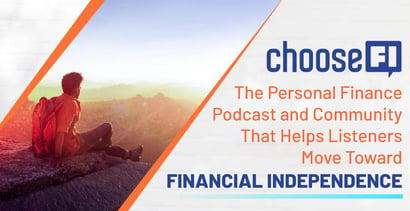 In a Nutshell: Who doesn’t dream of financial independence? Brad Barrett and Jonathan Mendonsa did and used the Financial Independence Retire Early (FIRE) movement to take their financial futures into their own hands. Barrett achieved financial independence at 35 and Mendonsa paid down $168,000 in student loans in just four years. The duo launched the “ChooseFI” podcast in 2017 with the goal of helping others learn how to achieve financial independence. What began as a podcast is now a brand packed with valuable resources, including a blog, videos, and a book. ChooseFI launched its second podcast, “Everyday Courage,” in January 2020. Hosted by Jillian Johnsrud, the show addresses living intentionally as an extension of the financial independence mindset.

Becky and Stephen Heptig worked and raised a family for many years without giving much thought to finances. Of course, there were ups and downs, but the couple made a decent living and provided for their children.

Eventually, after two of Stephen’s clients failed to pay him — amounting to about one year’s salary — the Heptigs had to reassess their laissez-faire approach to finance. So, at age 50, Becky and her husband began a journey to financial independence that led them from struggling to buy groceries to retirement at age 63.

Becky discussed her family’s financial journey on episode 152 of “ChooseFI,” a personal finance podcast that helps listeners achieve their goals of financial independence, or, FI.

The Heptigs were already on their path to FI when they were introduced to the “ChooseFI” podcast. The show further invigorated their drive to be frugal, and they were able to move their retirement date from age 67 to 63.

“So, in just over 10 years this couple who — quote-unquote — started late was able to turn it all around and still reach financial independence and retire early,” said Ashley Barnett, Editor in Chief at ChooseFI.

We recently spoke to Barnett about the ChooseFI network, which includes the podcast as well as articles, videos, other online resources, and a strong community of listeners.

Jonathan Mendonsa discovered the Financial Independence Retire Early movement after graduating from pharmacy school at 28 years old with $168,000 in student loans. By age 32, Mendonsa was out of debt and moving toward financial independence.

Brad Barrett achieved financial independence at age 35 after a career working as a CPA.

The Richmond-based duo decided to document their financial journeys and help others accelerate their own paths to financial independence, and launched the “ChooseFI” podcast in January 2017.

Jonathan Mendonsa and Brad Barrett are the co-hosts of the “ChooseFI” podcast.

“The co-hosts (…) discuss personal finance topics such as reducing expenses, eliminating debt, and building passive income streams through online businesses and real estate,” according to ChooseFI. “They also document their own personal efforts to optimize and enrich their happiness, relationships, careers, and health.”

Each episode contains entertaining content, actionable tips, and guests — some of whom are from the ChooseFI listener community — sharing their own stories about paying off debt, traveling the world for free, and more.

The podcast quickly made a splash and today has more than 12 million downloads in 190 countries, an active Facebook group with 52,000-plus members, and has ChooseFI local groups in cities around the world. The show received a Plutus Award for Podcast of the Year and was voted the No. 1 personal finance podcast in the world in a Rockstar Finance personal finance blogger poll.

It wasn’t long before the “ChooseFI” podcast evolved into a rich network of resources that now includes an informative blog, a trove of videos (ChooseFI TV) on YouTube, an e-newsletter, and much more. Barrett and Mendonsa also co-authored a ChooseFI book with Chris Mamula which was published in October 2019.

Barnett said she has been a finance blogger since 2008 and met Mendonsa and Barrett at a financial conference in 2017 when they were looking for someone to run the ChooseFI blog.

Tips From the Pros on Improving Financial Health

The standard rule of thumb is that a person could withdraw 4% of his or her account balance each year and never touch the principal, and live the rest of his or her life on those funds, she said. And the concept applies at any age level.

But if hitting that lofty savings goal seems unreal for your current situation, Barnett said it shouldn’t scare you away from the FI movement.

Conversely, if you love traveling, make conscious, intentional decisions about how and when to spend your time and money on traveling.

“A lot of us get caught up in thinking we have to drive a certain kind of car or have to live in a certain zip code or a certain size house, or whatever,” Barnett said. “You’re spending a lot of money on those things, but it’s bringing you almost no value.”

For readers who may be just learning about the FI concept, Barnett offered some advice on where to start. First, a person must establish what their monthly and annual expenses are, and maintain a budget. And getting out of debt is extremely important.

“How an individual follows the budget is up to them,” she said. “But you have to know what your expenses are, number one. And cutting your expenses benefits you in two ways. It gives you more money to save, obviously. And, as you reduce your annual expenses, you need to save less overall.”

In January 2020, ChooseFI launched the second podcast on its network, “Everyday Courage.” The show, which is hosted by Jillian Johnsrud addresses living intentionally as an extension of the FI mindset, as Barnett touched on as well.

ChooseFI announced the launch of “Everyday Courage” on episode 160 of its podcast and had Johnsrud on as a guest to discuss the new show.

“Everyday Courage” is the newest podcast on the ChooseFI network.

“I really felt like we were leaning in and doing things along the way as we grew our financial independence. But becoming financially independent was still a big transition,” Johnsrud explained. “Just because you have a lot of options that being good with money creates, doesn’t actually do the work for you. You still have to learn how to be awesome in your life and in your work.”

As the owner of the Montana Money Adventures blog and a life coach, Johnsrud is a financial expert in her own right, Barnett said.

“But this new podcast is not as heavy on personal finance stuff,” Barnett said. “It’s about that mindset of enjoying your life and life optimization. And they’re only about 10 minutes long so you can really fit them into your life.”

Most of us could use some sound financial advice and motivation to help us establish and reach our financial goals. And while saving 25 times your annual expenses may seem daunting, Barrett, Johnsrud, Heptig, and many others are living proof that it’s possible.

With the help of ChooseFI’s podcasts and other resources, listeners can join its strong community of supporters on the path to FI.