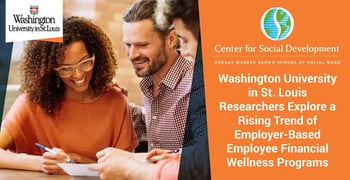 In a Nutshell: Employee financial wellness programs have grown in popularity since the Great Recession, when many Americans suffered financial losses that led to chronic economic woes. While still not extremely prevalent among workplaces, the employer-led programs have ballooned from 50 to 300 as more companies have invested in the livelihoods of those on whom they depend for business success. Until recently, little research had been done on how the programs work — namely, on which types of approaches were most effective. A project from The Center for Social Development at Washington University in St. Louis called the Employee Financial Wellness Programs project (EFWP) undertook such research, publishing survey and in-depth interview results in a 2017 report. Further research is planned, with three pilot studies launching in early 2018, which will take a closer look at developing more effective financial wellness programs.

A hospital employer interviewed for a research project at Washington University in St. Louis said: “It’s kind of like when you pay your car off. Do you drop the insurance, and all you carry is liability? But, then, what happens if you get in a car accident and it’s your fault? What are you going to do? People don’t think about that. They just think, ‘I can drop collision insurance. I have that much more money to spend.’”

“There were fewer than 50 financial wellness programs when I started studying them after the recession hit,” said Meredith Covington, the Project Director of Employee Financial Wellness Programs — a research project conducted by the George Warren Brown School of Social Work’s Center for Social Development. “Now, there are more than 300.”

The project examines the motivations to participate among both employers and employees, as well as results from participants, and the types of programs that seem to work best. The first findings from the EFWP, which includes survey responses from 16,500 employees and employers, and in-depth interviews with 24 employers, were published in a 2017 report by Covington, Ellen Frank-Miller, Mathieu R. Despard, Geraldine Hannon, and Michal Grinstein-Weiss.

The premise of the study is that Americans’ financial struggles have continued post-recession, and they often carry those to the workplace, which can affect work performance.

“What you are going through at home will invariably transfer to work,” Covington said.

Many studies have addressed these phenomena. One study shows people spend an average of 13 hours per month worrying about money at work. Another 2012 survey showed that two-thirds of Americans live paycheck to paycheck. The American Psychological Association reported in 2015 that finances had been an ongoing stressor for Americans since 2007, and that this stress could significantly impact Americans’ health and well-being. Financial stress also tends to decrease employees’ productivity and increase absenteeism.

Covington and her fellow researchers surveyed mostly small- to medium-sized companies, with a few Fortune 500 companies in the mix. Covington said the programs seem to be more popular among small- and medium-sized businesses that tend to prioritize employee well-being over return on investment.

Other common reasons included boosting employee performance and reducing absenteeism, Covington said, adding: “The workplace is already a natural environment for financial transactions to take place. Employers are administering benefits and have relationships with financial institutions.”

Furthermore, employers can “possibly reach some underserved populations among lower-wage workers.” However, the study showed participation was lower among low-wage workers.

“The employers were really reluctant to say they thought it was helpful in increasing job loyalty,” Covington said. “It’s hard to be able to really say — without controlling for other things in the workplace — that this program is helping reduce turnover rate. But overwhelmingly their response was that ‘employees are grateful we are offering it.’”

Financial Education is the Most Common Type of Program

The study showed the most common service offered as part of employers’ financial wellness programs was financial education. Employers reported that the most effective service was one-on-one coaching, while employees said they got the most use out of the savings and investment information. Some programs offered payroll loans to employees, and, for a fee, debt management services.

Most employees who took advantage of the programs used the services that were easiest to use, such as direct deposit and other online tools. For those employees who didn’t use the services, the most common reason given was that they were not needed. Half of the employees using these services reported at least one perceived benefit. “To actually quantify real benefits you have to be able to test the services,” Covington said. “We have not done that yet.”

The Washington University survey is a good first step in comprehensively assessing the programs.

“Even though these employers were bringing in different types of financial wellness programs, they weren’t always conducting a needs assessment,” she said, adding that the survey information will be helpful for employers as they fine-tune their offerings. “You could more closely align a benefit once you know the needs.”

In early 2018, the Washington University researchers will launch three pilot studies on three kinds of financial wellness interventions: coaching, credit counseling, and short-term loans. The areas selected, Covington said, “are based largely on what the responses were from surveyed employees.”

Generally, the first few sessions were free for employees and sometimes were organized in conjunction with discussions about retirement plans. “The retirement fund is through a vendor, and they have representatives that come out once or twice a year and give free counseling sessions,” one employer said. “You can sign up to meet with that person to talk about what your retirement looks like.”

The team’s continued research into employee financial wellness programs may uncover actionable data that could demonstrate the value of companies taking more ownership of their employees’ financial health and how best to operate such a program.