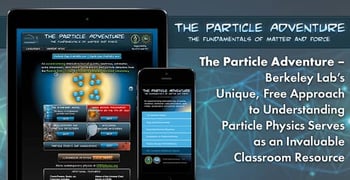 In a Nutshell: Success in the sphere of education is a major determiner of financial well-being later in life, but thriving in the classroom is often easier said than done. And this is doubly true with more technical topics, such as physics. Luckily, The Particle Adventure is one site (and also a convenient mobile app) that makes particle physics straightforward and fun to learn. The centerpiece of the project are the five modules explaining the standard model of physics, modern research goals and methods, and other topics. Because of its lighthearted approach and exceptional value as a scholastic resource, we’re recognizing The Particle Adventure with our Editor’s Choice™ Award.

In 1988, Stephen Hawking’s “A Brief History of Time” made the strangeness of modern physics entertaining and accessible to the reading public.

Millions of copies of the book have been sold, and it has been translated and read around the world. The book’s broad appeal is evident in the author’s subsequent popularity, appearing on popular television shows, like “The Simpsons,” “The Big Bang Theory,” “Futurama,” and others.

Hawking died on March 14, 2018; in June, his ashes will be interred in Westminster Abbey near the remains of Isaac Newton and Charles Darwin. In the coming years, countless people will surely make the pilgrimage to London and pay their respects to the man who helped them discover their own love for physics.

The subject matter Hawking invested in — popular science — is still alive and well, and moving at a pace with digital media. One successor to Hawking’s mode of physics writing: making science approachable and entertaining to understand is Lawrence Berkeley National Laboratory’s The Particle Adventure, a collaborative effort to make particle physics engaging to a general audience and flexible enough to accommodate individual interests.

“The design of the interactive website allows you to explore, go in different directions, and choose what you want to do,” said Michael Barnett, Senior Physicist at Berkeley Lab and one of the project’s founders, “so it is a bit like an adventure.”

A solid education is the greatest indicator of a young person’s future financial well-being but getting students enthusiastic about something as intimidating as physics can be tricky. The Particle Adventure’s accessibility and approach make it an outstanding resource for parents and teachers on tight budgets. For these reasons, we’re recognizing The Particle Adventure with our Editor’s Choice™ Award.

Evolution of an Award-Winning Adventure: From Chart to HyperCard and Beyond

The Particle Adventure’s story began in 1987. “A group of high school teachers were at a meeting and said, ‘The real problem with teaching modern physics — or particle physics, in particular — is that there are no materials available,’” Barnett said. “The first idea they came up with was to make a chart — sort of like the Periodic Table — but about modern particle physics.”

From this idea emerged the Fundamental Particles and Interactions poster. It has been updated several times over the years to keep pace with new discoveries, but it’s still free to download, study, and use as an academic resource. Prints of the poster are also available in various sizes. (Like Hawking, the wall-size poster has appeared on “The Big Bang Theory.”)

However, the project quickly outgrew its ink-on-paper origin. “It was felt then, especially by one of the teachers — Andi Erzberger — that we should build an interactive program around it to do more,” Barnett said. Erzberger, Barnett, Helen Quinn, and a group of students developed their program in HyperCard, an old Macintosh hypermedia system. “In 1995,” Barnett said, “we decided it made much more sense to put it on the web.”

More than two decades later, the website is still going strong, receiving around 5 million hits per year. Users can also download The Particle Adventure as an app through iTunes and Google Play. The app version is slightly reorganized to accommodate mobile screens, and it allows users to take their adventure offline, wherever they may roam.

The site and app are maintained by the Particle Data Group (PDG) at Lawrence Berkeley National Laboratory. These physics professionals have been aided by students, who have designed the web layout, developed animations, and inserted a healthy dose of humor.

This collaborative effort has ensured The Particle Adventure offers solid academic content, ease of use, and broad appeal.

Thanks to this blend, The Particle Adventure has received recognition and awards from scientific and educational groups, like Schoolzone, Discovery Channel, Scientific American, Physics.org, the US Department of Energy, and many others. “It’s very educational and understandable,” Barnett said. “People learn from it, but they also enjoy going through it.”

The Particle Adventure is, at heart, an adventure: it takes users on a trip through the esoteric world of modern physics. Unlike most books and documentaries, though, The Particle lets readers take a self-directed, self-paced journey into the wonderful weirdness of particles.

The tale begins with a module called The Standard Model, which is subdivided into three topics. The first covers what physicists mean when they use the term “fundamental” in the context of particle physics. It then delves into the basic building blocks of matter and concludes with the physical forces that hold matter together, explaining how particles and forces add up to the universe we all know and love.

For anyone lacking a background in physics, or those who need to brush up a little, The Standard Model is the place to start. “As you go on, it gets more complicated,” Barnett said. “But, at the early stages, it’s very simple.”

After traversing this introductory path, the user is prepared to explore the other topics. These include Accelerators and Particle Detectors, which explains the principles of particle experimentation, how modern research is carried out, and how scientists interpret their data.

Particle Decays and Annihilations provides an overview of the different ways particles break down and the conditions under which different types of decay occur. Another module is called Higgs Boson Discovered, which examines the way physicists have used research to explain how and why particles have mass.

Finally, the Unsolved Mysteries module looks at major questions that are still unanswered within the Standard model and discusses approaches to finding solutions. This path addresses the search for the Grand Unified Theory, an elegant explanation of all physical phenomena — currently, the holy grail of physics.

This information can be found in standard physics texts and popular science books, but The Particle Adventure takes care to make it all as entertaining and understandable as possible. One way the site does this is through analogical reasoning. The Particle Adventure explains physics using technical terms, but supplements these with metaphors that help readers grasp the complex concepts and dynamics.

The Particle Adventure also helps its readers understand the larger historical and cultural context of physics. It includes quotes from and anecdotes about famous physicists who contributed to the study of particles, and it establishes the context and roots of the modern discipline.

For example, in the process of defining fundamental in The Standard Model, the site mentions Empedocles’ belief that the four elements — earth, wind, water, and fire — were the fundamental substances of reality, then contrasts this with the Wu Xing, the ancient Chinese philosophy of five fundamental elements — wood, water, earth, fire, and metal. Through these and other topics, The Particle Adventure helps readers learn about physics and also helps them get an idea of how, when, and why scientific thought developed through the ages.

Perhaps best of all, irreverent humor abounds in The Particle Adventure, keeping readers interested and attentive. The jokes and gags are mostly ancillary to the informational content, and they’re often found in images and animations, such as explaining lepton decay by depicting a lion “decaying” into a housecat and subatomic fleas.

This is just one example of some of the visual humor you’ll find along The Particle Adventure.

The Particle Adventure also incorporates short quizzes into each path, allowing users to test their comprehension as they progress. These quizzes help readers stay engaged, but they aren’t evaluated in any way; skipping a quiz doesn’t prevent a reader from moving on to other topics and modules.

By traversing the five paths of The Particle Adventure, readers can gain a better understanding of what our universe is, how it works, and what we’re still struggling to understand about it. But, even if a user completes all the modules, their adventure is still far from over.

The Particle Adventure spurs readers to continue their journeys by directing them to other, related resources. Some are offered by the Contemporary Physics Education Project (CPEP), while others are external, independent sites.

Through CPEP, enthusiasts and educators can get a copy of the Fundamental Particles and Interactions poster along with others about the Higgs boson and the history of the universe. To supplement these, seven free activity worksheets are also available as downloadable PDFs. Additional documents are also available free of cost, but teachers will need to request access to use them.

The Particle Adventure provides a comprehensive glossary that can be used in tandem with the posters, adventure, and for general study. For history and culture enthusiasts, the particle physics timeline goes deeper into the development of physics from the classical through the modern eras. Links to other resources and sites are available on the site’s landing page under Additional Resources. Through these, learners can keep exploring the realm of physics.

Expanding Readers’ Universe, One Particle at a Time

Barnett’s latest project is Phantom of the Universe, a planetarium show about the search for dark matter. It’s available at 370 planetariums across 59 countries and has been translated into 17 languages, which means there’s plenty of opportunity for the public to learn more about the cutting edge of astrophysical research.

While you’re waiting in line for tickets, The Particle Adventure site and app can help you prepare for your encounter with dark matter, and with the various other aspects of the still-developing field of physics. Thanks to this resource, anyone can learn more about the fundamentals and characteristics of this marvelous and mysterious universe we call our home.