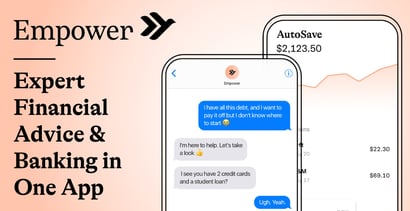 In a Nutshell: A lack of financial literacy in the U.S. takes its toll on consumers in the form of high debt, low credit scores, and other personal finance issues. Empower is an AI-powered app that helps solve this problem by providing banking services and easy-to-use budgeting. The app analyzes customers’ bank accounts and spending habits to educate them about their finances through its automated financial coaching. Empower further helps consumers save with its automated savings account and a checking account with no fees during a free 30-day trial, while it’s customizable budgeting functionality is designed to work even for those who hate dealing with budgets.

Financial literacy is a woefully under-addressed topic in the U.S.

Talking about money is seen as a social taboo, yet many schools fail to deliver the basics of financial education as well. The lack of financial literacy is not only responsible for consumers making poor personal finance decisions that result in bad credit and thin budgets, but it has been identified as a factor in the gender wage gap and the 50% U.S. divorce rate.

Even for someone like Warren Hogarth, who considered himself a financially literate and savvy person when he arrived in the U.S. in 2005, knowing how to navigate the world of finance can be challenging.

“Even I made a bunch of mistakes,” Hogarth recalls. “I came over here from Australia and I didn’t get a credit card for the first four years I was here, so I wasn’t building a credit history. I had to put down a $500 deposit as a student to get my phone.”

Hogarth said he also struggled to get an auto loan. He anticipated he would easily secure a loan because he had not previously borrowed money. But again, his lack of credit history worked against him.

These experiences — along with his time in the venture capital space where he saw big advances in artificial intelligence making its way into the tech industry — led to him co-founding Empower.

Empower is an AI-powered financial app that helps others avoid the mistakes Hogarth made.

“I saw these changes happening in banking,” Hogarth said. “And realized we could start a company that really addresses those problems of people not knowing what the right thing to do is by offering automated financial coaching and better financial services that don’t try and trip you up.”

When Empower launched in 2017, the platform was dedicated to delivering financial advice to users in a helpful, non-intrusive manner. As Empower’s services have grown, financial literacy remains at the heart of its functionality.

Hogarth said using Empower is like having a smart friend who’s super-savvy about their money watching over your funds 24 hours a day, seven days a week and providing advice at just the right time without being overly assertive.

Warren Hogarth is a Co-Founder and the CEO of Empower.

Today, more than 650,000 are on the Empower platform. Users connect their bank accounts to the app and then Empower provides an accurate snapshot of their financial picture, including how much they currently have and how much they owe.

Hogarth said the app then makes suggestions based on the user’s financial data, such as paying more on a credit card if they saved extra one month, or warning them if their spending exceeds their earnings. Empower also digs deeper with suggestions on when to explore refinancing a credit card to save on interest.

“One of the most popular recommendations is around credit utilization, which can be responsible for about one-third of your credit score,” Hogarth said. “Most people don’t know if they run the utilization up to 30% on any single card it can massively impact your credit score.”

Hogarth said he experienced this personally when his score dropped by 80 points in one month despite never missing a credit card payment. But with Empower, users don’t have to worry because the virtual assistant will alert them if they are approaching the 30% utilization rate.

The automated advice feature is extremely valuable because users often don’t even know what questions they should be asking.

“We started off by offering that financial coaching piece, and it was extremely well received,” Hogarth said. “Then we added in automated savings because one of the things we saw was the people wanted to save, but the time and the friction of actually just going through the hassle of making regular payments to save was complicated.”

He said Empower had its sights set on offering some no-hassle banking products from its inception but it was important to establish the platform’s value and credibility with users before it explored partnering with banks.

What the company came up with is an easy-to-use savings account in which the Empower’s AI capabilities work to maximize your savings. Users simply choose which checking account from which to transfer money and tell Empower how much they want to save each week.

Empower studies the user’s income and expenses on a daily basis and sets aside extra money for savings if it detects that there is excess cash on hand. Conversely, it will transfer less money if expenses are trending up.

Empower AutoSave accounts earn 0.25% APY for customers who have Empower checking accounts and are FDIC-insured up to $250,000.

Empower provides high-interest checking at 0.25% APY, with no minimum balance required. The checking account is free for 30 days, then it rolls into a monthly subscription for $8 a month. There are no overdraft fees, no insufficient funds fees, and no minimum balances. (Banking services for new accounts provided by nbkc bank, Member FDIC. 0.25% Annual Percentage Yield (APY) may change at any time. APY as of January 27, 2020. Empower charges an auto-recurring subscription fee of $8 for access to the full suite of money management features offered on the platform after your first 30 days.)

“Launching the banking side of things has been really cool,” Hogarth said. “That’s taken off over the last year, so it’s been a pretty amazing ride and journey seeing the impact it has on folks.”

Additionally, Empower users can stop worrying about throwing money away to overdraft fees from banks.

“We believe you will never run into these situations when you use the app properly, so we don’t provide overdraft and you will never get charged an overdraft fee or insufficient fund fee,” according to an Empower blog post. “Your transaction will simply be denied if you ever run out of money.”

An In-Depth Yet Simple Budgeting Tool

Hogarth said he’s a bit of a geek in his personal life when it comes to budgeting so when it came time to develop the budgeting component of Empower, he took a keen interest in the project.

“We wanted to make sure that we could get the best data coming in as possible, so we spent a lot of time on this,” he said. “The data that comes in from the banks is very measured.”

Empower’s powerful budgeting tool is designed to be easy-to-use, even for those who hate budgeting.

He said some of the major problems with other budget apps he has seen is that the transaction names often don’t make sense and the categorization functionality is not helpful.

“We put a lot of effort into building out intelligent tools to clean up transactions and accurately categorize them,” he said. And the Empower algorithm learns as it goes. If a new coffee shop opens up and an Empower user categorizes it for the first time, the next time a person goes to that coffee shop the app will recognize it and categorize it accordingly.

Empower calls it budgeting for people who hate budgeting.

“Whip up budgets that reflect your lifestyle and get alerts on how your bills and purchases are tracking to plan,” according to the company website. “Knowledge is power.”

And for users who aren’t even sure where to start when setting up a budget, Empower can suggest an overall monthly spend limit based on your income, and you can establish your own spend limits by week or month for each budget category.

Then, Empower will let you know how you’re doing.

“Get timely updates on how you’re tracking to your spend limits,” according to the company. “Are you about to go over? Are you likely to come in under? Rest easy, we’ll tell you.”

Gearing Up To Launch a Cash Advance Product for Responsible Borrowers

Empower has continually made improvements and added services since its inception, and Hogarth said that trend will continue.

“We’re launching a new product soon, which is a cash advance product,” he said. “It allows responsible people to get up to $150 between paychecks when they need it — without a credit check — based on the fact that they’re showing that they’re responsible in their daily banking and spending.”

Hogarth said the new feature will likely be available in the first quarter of 2020.