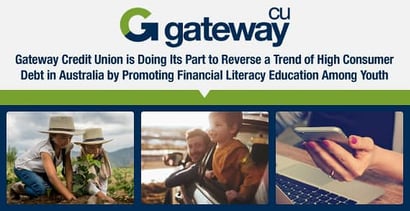 In a Nutshell: Australia has one of the highest levels of consumer debt, in part fed by some of the world’s highest housing prices. Contributing to a high level of personal debt is a cultural tendency to overspend and generate what’s considered to be bad debt. This trend can be traced back to a lack of financial literacy, and the Australian government, schools, and some of the nation’s financial institutions have taken a lead on educating people from a young age about key concepts, like saving money and the proper use of credit. Based in Sydney, Gateway Credit Union is one such institution that has programs dedicated to member education. We recently spoke with Gateway Credit Union CEO Paul Thomas about these programs and the problem of mounting consumer debt in Australia.

Australia is facing a paradox: It has the highest household debt to GDP ratio of any nation, but its sovereign debt is one of the world’s lowest. Indeed, household debt is almost four times higher than public debt, at 34% of the nation’s GDP, one of the lowest in the Organization for Economic Cooperation and Development (OECD). The latter may bode well for Australia’s reputation in the world, but soaring household debt means a lot of people are living beyond their means. Conspicuous consumption is one of the reasons, writes Paul Thomas, CEO of Gateway Credit Union.

“Many households live by the mantra: we want it, we want it now, and we’re not prepared to wait,” he wrote in a blog post. “But the more we have, the more we want, and this is fueling an endless cycle of spending. We increasingly define our lives by how much stuff we have, and many find it difficult to control the urge to splurge.”

This cycle can lead to an abundance of bad debt, he writes in another post, making the distinction between good debt and bad. Good debt creates wealth. An example would be taking on debt to buy a home, which is often seen as an investment that can increase in value over time.

Many people don’t know the difference, however, and they may also lack simple budgeting skills and knowledge of credit. In response to this lack of financial literacy, the Australian government and many of the country’s financial institutions, including Gateway Credit Union, are taking on the issue by focusing on one member at a time.

“By the time a person is 21 or 22, they can be in debt,” Paul told us in a recent conversation. “They can get cards at that age, and they often just can’t handle it.”

While Gateway has financial literacy resources for members of all ages, it has created special programs for young people. Paul explained these programs, as well as the broader context of debt in Australia.

Paul writes that one of the causes of global financial crises was a lack of financial literacy among borrowers. That was the case when Americans took out loans they could not afford before the Great Recession, and it’s certainly also true in Australia, where Paul says there’s a herd mentality, whereby consumers buy what others are buying, seemingly just to keep up.

A long-standing example of this lack of consumer financial literacy is confusion around superannuation, a type of retirement fund in Australia that is partly compulsory, but which few people understand.

“Australian workers and retirees face considerable challenges navigating the complex financial products and policies required for retirement planning,” Paul said. “Our superannuation system assumes people are savvy enough to select their own fund and investment strategy. The harsh reality is that most Australians find it complex and confusing.”

One of the reasons for the mass confusion is the government has renamed its package of superannuation reforms three times in the past decade, Paul said, adding that he suggests copying his own approach to navigating the superannuation system — working with a good financial planner.

“When it comes to superannuation, it’s easy to get confused by jargon and technical talk,” he said. “So, if in doubt, talk to an advisor.”

However, the bigger picture of rampant financial illiteracy needs to be dealt with long before retirement is on the horizon, Paul said. Children could see tremendous benefits from learning about finances as soon as they start learning how to count.

“Schools should start with the basics by showing students how to prepare a budget, compare loan and deposit accounts, and prevent identity theft,” he said.

Apart from schools, financial institutions also have a role to play in educating young people about their finances, Paul continued. One tool, provided by the government’s Australian Securities and Investments Commission (ASIC) includes a curriculum called MoneySmart Teaching. Gateway, itself, has various resources for children as well. Dollaroo Accounts are savings accounts for children up to age 16, which go a long way in teaching them about saving money early in life.

“It’s designed to be fun,” Paul said. “We send out a newsletter, and the kids are rewarded by saving because they’re part of a special club.”

A Housing Crisis Defines a Nation of ‘Haves’ and ‘Have Nots’

A major cause of Australians’ high levels of personal debt is directly tied to the housing crisis. Australia has the third most expensive housing market in the world based on the median multiple model, trailing only Hong Kong and New Zealand.

“Houses that cost more than five times the median income are considered ‘severely unaffordable,’ and five of the 29 cities that carry this severe rating are in Australia,” Paul said. “Housing in our capital cities is among the least affordable in the world.”

In Sydney and Melbourne, he added, average property prices have increased 90% in the past decade. Meanwhile, wages have remained flat.

“In Australia, it’s a given that you have to spend more on housing and less in other areas, but the situation is unsustainable,” Paul said.

However, Paul said personal habits are also largely to blame. In fact, the housing crisis epitomizes Australians’ tendency to outdo themselves in competing with others.

“We take on supersized mortgages so we can outbid each other at auctions,” Paul said. “Like the board game, Monopoly, Aussies love to throw the dice on property.”

The problem is also associated with Australians’ cultural inclination toward home ownership, despite the prohibitive associated costs.

“It’s part of our national psyche to want your own little piece of Australia. We have one of the highest rates of home ownership in the world, thanks to our love affair with bricks and mortar,” Paul said. “Housing not only provides us with shelter, but a stable and permanent return on our money.”

But for young Australians, this dream is nearly impossible, he added, creating classes of haves and have-nots based on home ownership, and wealthy homeowners and poor renters.

No one likes to be in debt, much less admit to being in debt. But credit unions, like Gateway, play an important role, Paul said, in educating people on preventing debt and gently guiding them out of it. There’s a genuine mentality of “people helping people” at credit unions, and encouraging habits of thrift.

Paul notes the need to support a “head versus heart mentality with money,” and the latter involves impulsive spending.

“When I sit with people who are in financial distress, it’s not typically because they’ve lost a job or have insufficient income,” he said. “It’s because of out-of-control spending,” he said. “It’s incumbent on all of us to stop poor money habits before they start.”

The best way to prevent this? It all circles back to financial literacy.

“Research shows that individuals who learn about money management invariably fare better than those who don’t,” Paul said.