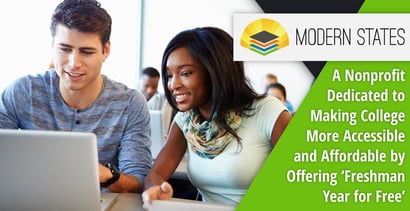 In a Nutshell: With college tuition prices on the rise and student loan debt at an all-time high, Modern States is doing its part to give students greater access to a college education at a lower price. The nonprofit offers 32 online courses completely free of charge — including textbooks and other materials — to prepare them for CLEP exams they can pass for college credit. Modern States courses are open to anybody with an internet connection and can be taken on laptops, tablets, and even cellphones. Students can take as few or as many courses as they wish, and can potentially earn their freshman year of college for free through Modern States courses and CLEP exams.

Freeman Talla came to the United States from his native Cameroon to attend Kennesaw State University (KSU). Talla’s goal was to earn a degree in electrical engineering technology, so he could eventually help deliver solar energy to his home country, which suffers from frequent power outages and high electricity costs.

With the help of Modern States, Talla completed his degree in less time and for less money, so he could get down to the business of helping his country sooner.

“I took two courses through Modern States to prepare for the CLEP exams,” Talla said of his experience. “It helped me reduce the number of semesters I was supposed to do at KSU.”

Modern States is a nonprofit organization with a mission to make college more accessible and more affordable by offering free online courses for students, said Executive Director David Vise. A Pulitzer Prize winner and former journalist for The Washington Post, Vise now oversees the day-to-day operation of Modern States and works closely with Founder and CEO Steve Klinsky to implement the nonprofit’s vision.

“Both of us were very concerned that college tuition has soared to such a level that we’re shutting people out,” Vise said. “We felt that nobody should be shut out of education because of cost or lack of access. And, with more than $1.5 trillion in student loan debt in the country, we needed — and wanted — to do something.”

Modern States directly addresses these issues with its online courses that are free and open to anyone. The idea is that students of any age can take Modern States courses, then take and pass college CLEP tests and receive college credit.

Students can earn college credit by passing CLEP tests in subjects such as literature, languages, history, science, math, and business.

“I think CLEP is one of college education’s best-kept secrets. It’s a real hidden gem,” Vise said. “The concept behind CLEP was to get college credit for what you already know. With Modern States, students can get college credit through CLEP for what they learn.”

And even though CLEP tests are more than 50 years old, Vise said the tests have not received the level of publicity as have other College Board offerings, like the SAT and AP exams.

Modern States offers 32 courses across a variety of subjects that are completely free to anyone who wishes to take them, regardless of age, income, or prior college credits.

“We hired the best college professors that we could from some great schools like Johns Hopkins, George Washington University, Tufts University, and Columbia University,” Vise said. “And, most importantly, we hired professors who are engaging in the online format.”

Vise said that, as a philanthropic organization, Modern States offers all its courses for free as well as free textbooks and other materials that may accompany the courses. Speaking of which, Modern States currently offers 32 courses.

“We also pay the $89 exam fee, which goes to the College Board, and reimburse the processing fee for the test center,” Vise said. “The entire program is free.”

Participants can Potentially Take Their Freshman Year of College for Free

“Modern States’ initial program, Freshman Year for Free, is intended to let students earn up to one year of college credit without tuition or textbook expense,” according to the organization’s website.

“The idea is that people could save up to 25% of the cost of college,” Vise said. “And, one of the really great things about CLEP is that it is already accepted for credit at 2,900 colleges and universities — that’s key.”

He said students can use Modern States’ course offerings as an on-ramp to college by starting their secondary education career with a full year’s worth of credit by the time they enroll. But learners can take as few or as many courses as they would like.

Students can earn enough credits through Modern States to essentially take their whole freshman year of college for free.

“Steve Klinsky has been the primary backer of the program since its inception,” Vise said. “We launched about two years ago out of beta, and we’ve had more than 180,000 students sign up for the program.”

A recent press release from Modern States announced the nonprofit has raised a $1.35 million commitment from Klinsky and several major foundations. Vise said Modern States’ partnership with edX, the online learning platform founded by Harvard and MIT, has also been central to the program’s success.

Students not only save a lot of money and stave off student loan debt, Vise said, but they can also access the courses whenever and wherever they want.

A Global Public Library of College Courses Open to Anyone

“There’s no admission requirement for Modern States’ courses — it’s open to all people,” Vise said. “We have high school students. We have college students. We have adult learners who are trying to get ahead in their careers.”

Vise recounted a case where a single mom with a child who is disabled began listening to Modern States courses while she was in her car. Her goal is to eventually attain a Masters of Education in nursing and serve as an advocate for other children with rare diseases and their families.

“In short, Modern States works like a global digital public library of great college courses,” according to the organization’s website. “Enrollment in Modern States courses will be ‘massively open’ to all people without regard to age, location, family income, nationality, prior credits or other factors.”

Vise said although the option is available for students to pursue the Freshman Year for Free track, many Modern States students simply use the nonprofit to take three or four courses, or about a semester’s worth of credits.

He said some students may only take one course and pass the associated CLEP test, but the experience gives them the boost of confidence they needed to enroll in a college and continue to pursue their education.

“Modern States is not in opposition to any traditional college and recognizes that a four-year residential experience at an established university is the preferred alternative,” according to the website. “However, such an opportunity is out of reach for many people, given the high cost of tuition and other factors.”

Whether students use Modern States to CLEP out of one college class or an entire year, it’s clear that the nonprofit is providing a much-needed service in today’s world. And it is truly putting actions behind its mission to make college more affordable and more accessible to anybody.