As a ‘Working College,’ Berea College Provides High-Quality Education to Low-Income Students at No Cost 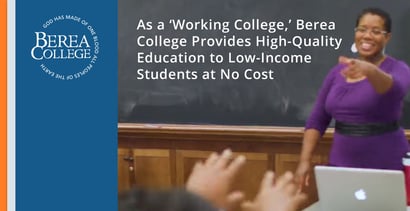 In a Nutshell: Student loan debt is a major problem for many recent college graduates. But not for graduates of Berea College. The Kentucky institution was founded as the first interracial and co-educational college in the South. And in its early years, it also became one of the only colleges in the U.S. to not charge tuition to any student. The college admits academically promising students who come from low-income families. The students carry full academic loads and work between 10 and 15 hours a week during their time at Berea College. Although its business model is distinct, Berea College delivers a high-caliber education in more than 32 majors.

The debt burden today’s college grads are carrying is actually changing the way millennials live their lives when compared to previous generations. Some have delayed marriage, put off buying a home, and even foregone having children due to their student loan burdens.

The student loan crisis recently gained a bit more attention on the national stage as COVID-19 has spread across the country. Social distancing and shelter-at-home orders have left millions out of work. Thankfully, Congress was able to quickly come together to pass the CARES Act, which halted student loan payments for six months and also paused collections on overdue student loan payments.

But after the COVID-19 crisis ends, the student loan debt crisis will remain.

What if students didn’t have to pay tuition to receive a high-quality college education? What if they went out into the world after four years debt-free and ready to contribute to society?

That’s what’s happening at Berea College in Berea, Kentucky. The private college uses its endowment to accept academically promising, low-income students who likely would not have any other way to pursue higher education. And as part of their tuition-free education, students work 10 hours or more per week for the college in some capacity.

As the college itself puts it, it’s the best education money can’t buy.

We recently spoke with Berea College’s President Dr. Lyle Roelofs about the institution’s history and differentiating approach to higher education.

“The college actually goes back to just before the Civil War,” Roelofs said. “It was founded by an abolitionist. Early on, it wasn’t completely free but it was always interracial and co-educational from the start.”

Berea College was the vision of Rev. John G. Fee, who started the institution as a one-room school in the central Kentucky town in 1855.

Dr. Lyle Roelofs is the President of Berea College.

“Fee, a native of Bracken County, Ky., was a scholar of strong moral character, dedication, determination, and great faith,” according to the college website. “He believed in a school that would be an advocate of equality and excellence in education for men and women of all races.”

Berea was the first interracial and co-educational college to be founded in the South.

Like so many businesses and institutions in the south, the college shuttered its doors during the Civil War but reopened as a bigger and better institution shortly after the war ended. The college made its next big step toward the model it operates on today with the tenure of its third president, who made some big changes.

“One was to eliminate tuition and another was to provide on-campus jobs for every student,” Roelofs said. “The idea was that those two things would enable students — instead of going away, working for a semester, coming back, then going away, and coming back — they might be able just to go right through and get their degree.”

To replace the cost of tuition, the college began a fundraising campaign aimed at wealthy people, mostly in the Northeast, who were willing to support schools in the South during the Reconstruction Era, Roelofs said.

“That was successful. (The president) promoted our service to Appalachia,” Roelofs said. “The idea was, as he put it, ‘to educate those undiscovered Abraham Lincolns that are still in the mountains and would otherwise not have access because they just don’t have any money.”

In the 1920s, the college established an endowment to move away from a model of only fundraising.

These early visionary and progressive efforts laid the foundation for the successful institution that Berea College is today.

Roelofs said Berea College’s endowment has now grown to a point that on a per-student basis it is comparable to some of the most highly ranked colleges in the country, and so is able to support a very high-quality educational experience.

“Until the recent downturn, it was about $750,000 per student,” he said. “That spins off about $35,000 to $40,000 per student per year. And that’s the foundation for the business model. We also raise another $4 million from donors annually. And we get a lot of Pell support because we don’t take students unless they have high need.”

Roelofs explained that if a student can afford to pay any tuition at all, his or her application will not be accepted at Berea College. The mean family income of the college’s first-year students is less than $30,000 per year.

Besides accepting no tuition, one of Berea College’s other main distinctions is that it is one of only nine federally recognized Working Colleges in the U.S.

At Berea, every student works 10 to 15 hours per week while carrying a full academic load. The students are able to choose work options in more than 100 college and off-campus programs.

“Students gain valuable workplace experience, earn money for books, food and other expenses, and their appreciation for the dignity and utility of labor is enhanced,” according to the Berea College website.

And there is plenty of work to go around.

“The students are such good workers that every department around here wants more students,” Roelofs said. “The jobs are there — we’re always short on students to fill every job.”

The big upside for Berea College students is that they can graduate from college debt-free, unlike students from so many other institutions in the U.S.

Roelofs said that about one-third of Berea College students don’t incur any debt at all. Other students may incur small debts if they want to study abroad for a semester or perhaps they have family members they help care for.

Although Berea College’s business model as a Working College is much different than most higher education institutions, it still offers a high-caliber education in an array of degree programs.

Students can earn a Bachelor of Arts or Science degree in one of 32 different majors or choose alternative options such as student-designed majors or a dual-degree engineering program. Berea also houses 16 national and international honor societies.

“Berea’s educational experience provides students the knowledge and skills to successfully navigate the world,” according to the college website. “Berea provides a stimulating and challenging environment. Whether in the classroom, attending a Convocation, interning, studying abroad or linking labor with academic goals, the educational experience is truly like no other.”

With its high-caliber curriculum, Berea College sets financially troubled students up for success.

About 70% of Berea College students are from the Appalachian region, but overall, there are 1,600 undergraduate students representing nearly every U.S. state and more than 60 countries. And 1 out of 3 students is a person of color, according to the college.

“Berea students are much more aware that this is probably their best and only chance to get a college degree,” he said. “It’s not like, ‘If this doesn’t work out for me, Mom and Dad will let me transfer to another school, and they’ll continue to pay tuition.’ If you don’t make it at Berea, you probably don’t have other good options. Maybe you go into the military or to a community college and see how that goes.”

Additionally, the student body is less cynical than it may be at other schools, Roelofs said.

And with Berea College graduates entering the workforce with little to no debt, they are free to make positive impacts on society and help their families in ways that may not have otherwise been possible.

“When you change the economic trajectory of a student’s life you actually change many trajectories,” Roelofs said. “That student will go on to have a family, and that family will be in completely different circumstances than they otherwise would have.”

This also means the student can help his or her other family members, such as parents, brothers, sisters, and cousins as well.

“So the impact of changing one life is really much, much broader than that one life,” he said.

Berea College has seen its graduates go on to an array of successful careers. One graduate won the Nobel Prize, Roelofs said, while another went on to become a doctor who founded the Cancer Center at Vanderbilt University.

While Berea College’s business model may not be realistic for every higher education institution, maybe it can serve as an inspiration for leaders and decision-makers to seek alternatives to the current system that has resulted in student debt problems for so many.