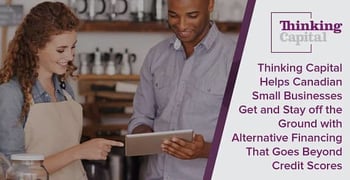 In a Nutshell: Many Canadian entrepreneurs have already discovered the advantages of small business lending. A leader in the space for more than a decade, Thinking Capital has financed more than 10,000 Canadian companies and was part of the financial technology industry before anyone was calling it Fintech. CEO and Co-Founder Jeff Mitelman recently spoke with us and shared his company’s philosophy, loan approval process, and partner-centric vision for Thinking Capital’s future.

Almost every one of the world’s major brands and businesses started small. Entrepreneurs behind restaurant chains, like Tim Hortons and McDonald’s, began with dreams that grew their companies into what they are today.

With healthy bottom lines (and maybe not-so-healthy waistlines?), these fast food chains likely aren’t in need of funding anymore. However, when businesses are initially trying to get off the ground, working capital becomes essential to growth potential

So where do these up-and-coming businesses turn when cash flow is tight and they have employees to pay and inventory demands to meet? You may have heard the phrase, “you have to spend money to make money,” and when small business owners need funding quickly, many are turning to small business lenders, like Canada’s Thinking Capital.

Headquartered in Montreal, Thinking Capital specializes in technology and finances a range of businesses: from small mom-and-pops to businesses with annual sales of up to about $25 million.

We recently spoke with Jeff Mitelman, CEO and Co-Founder of Thinking Capital, who told us about the lending platform.

“As a balance sheet lender,” Jeff said, “we originate loans and hold them directly,” adding that the Canadian small business sector has typically been underserved, especially compared to its US counterpart. “Canada has far fewer traditional lenders than the US.”

Thinking Capital has helped more than 10,000 small-to-medium Canadian businesses since 2006. According to its website, “Our strategy hinges on partnering with leading financial institutions and technologies such as CIBC*, Money Mart, Moneris, TouchBistro and many more. These partnerships are unique to the Canadian small business lending space and make Thinking Capital a clear leader in this growing sector.”

Redefining the Language of Credit Around Small Businesses

Working in the small business lending space is not without its challenges.

“This is a space that’s notoriously difficult to finance because of an element that we call ‘the language of credit.’ That is the definition of their creditworthiness,” Jeff said. “Historically, it’s been focused on the Beacon Score. The US equivalent would be the FICO score for consumers, but a comparable measure doesn’t really exist in small businesses.

“So, when we say that our mission statement is to become the rails on which small businesses borrow money, a big part of that is redefining the language around small business credit.”

CEO Jeff Mitelman told us Thinking Capital looks at different factors for creditworthiness than what traditional lenders are considering.

While traditional lenders would look at documents, such as financial statements, personal net worth, or credit bureau statements, to determine a company’s worthiness to finance, Thinking Capital has turned its attention to other factors.

“Today, there are so many sets of data that could be better indicators of business health,” Jeff said, specifying card sales and banking data as two preferred measures. “The big differences between those and what has historically been used is that those are very granular and highly transactional.”

Business owners with non-existent or mid-prime credit have historically had difficulties getting loans, but Thinking Capital uses a different approach altogether. Jeff explained that it’s unfair to judge a company’s credit when standard measures for small business credit — and bad credit specifically — do not even exist.

“Really, the top focus should be: ‘What is the health of the company that is applying for credit?’” he said. “Often, that goes well beyond the individual credit health of the owners themselves, which often leads to the characterization of bad credit. We’re in the business of adjudicating small businesses with a lens around ‘How creditworthy is that?’”

From a Digital Interface to 24-Hour Credit Approval

The adjudication process starts with a digital interface, Jeff said.

“Often, the applicant will be able to apply from within an environment that they already feel comfortable with. We have numerous partners that act as a natural entry point,” he explained. “Once we know who they are, we then ask them to connect a data set, like a bank account or payment processing account.”

With this information, Thinking Capital can develop an almost instantaneous view of the company’s creditworthiness, and a decision usually follows within a period of 24 hours or sooner.

“It’s quite different from the traditional experience,” Jeff said. “They receive pre-approval and can select the product that best suits their needs. They can select an amount and a repayment schedule that best serves them.”

Typically, he added, an application will come in on Monday, and the account is funded by Wednesday or Thursday of the same week.

“So many components of the CRM (customer relationship management) exist at such an advanced level within a Salesforce environment,” he said. “We leverage our Salesforce to use so much of that CRM rather than have to build it ourselves. In addition, we’ll take our own risk models, which are proprietary, and we plug them into a pre-existing platform.”

Moving Toward a Partner-Focused Future

Fintech might be somewhat of a buzzword, but any chance to leverage technology to automate complicated processes will have the attention of any executive focused on a healthy bottom line. Thinking Capital has been on the forefront of using technology to facilitate business lending for more than a decade.

“It feels we’re just getting started,” he added. “We’re very partner-focused and exceptionally motivated to support many of the large brands that small businesses rely on in this country, including Moneris, Staples, The UPS Store, and many to come in the future.”

Jeff said Thinking Capital’s core emphasis remains dedication to small business owners and helping them fine-tune their loan strategies based on a comprehensive view of the businesses they’ve created.

“Given the lack of options to finance small business, small business owners have used their own personal credit,”Jeff said. “By doing that, they’re creating downward pressure on their personal credit. The ability to turn around and underwrite the business first, before having a lens on the owner’s personal credit, is a fundamental change and is far more inclusive in being able to solve the funding gap that exists.”

Thinking Capital’s website includes testimonials of successful small business owners who have turned to the lender for their funding needs. Andy Edler, the owner of Grill Time, used a Thinking Capital loan to finance new equipment for his restaurant. “The last two years, I’ve enjoyed an approximately 30% increase in sales year over year. Without hesitation, I would refer any business to Thinking Capital.”