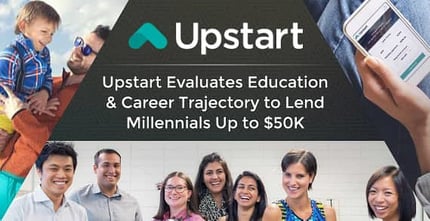 By: Lauren Keys
Experts share their tips and advice on BadCredit.org, with the goal of helping subprime consumers. Our articles follow strict editorial guidelines.

In a Nutshell: When you’re a young adult with nothing on your credit report other than student loans and credit card debt for lenders to look at, not many people outside of your own family will offer you a loan — and your parents likely don’t have the thousands of dollars you need for your first car or a down payment on a house. Instead of being judged — and ultimately denied — based on your thin credit history, Upstart has honed its process to offer loans specifically to millennials based on their future career and earning potential. By evaluating educational data like what you studied, your GPA, and SAT scores, Upstart provides the cash young adults need with fair terms and interest rates.

When I started college, I noticed many of my new friends had these convenient pieces of plastic called credit cards. After doing some research, I realized that getting my own credit card would be helpful for emergencies and help build my credit if I used it responsibly. The problem? I couldn’t get one.

Now, it didn’t help that I was seeking credit during the financial crisis of 2008, when every institution was tightening its lending policies, but I couldn’t even get a Target store credit card (I had to settle for their debit card) and had to submit extra “identifying documents” to create a PayPal account. The back and forth, the waiting — it was beyond frustrating.

Young adults, myself included, have to figure out everything from financing their education to new tires for their car, without much guidance and without a lot of options. The next generation of the workforce emerges from school saddled with debt from credit cards and student loans, which are typically the only ways students can access capital.

By the time I was graduating, Upstart had emerged as a solution for the disconnect between the thin credit file of young borrowers and the need many of them have for funds to buy their first “adult” vehicle, first home, or to just consolidate the credit card debt they may have accumulated at a lower interest rate.

“Financial Fitness for All” is the central mission of Upstart.

Upstart factors in different variables to get a better picture of its borrowers — including where they went to school and work history — which helps them provide a more reasonable loan rate than what is typically offered to people with limited credit history or low scores.

In less than two minutes, you can sign up to receive a quote on the company’s website, and once you accept an offer you can access the funds in as little as 24 hours. The loans offered through Upstart typically range from $1,000 to $50,000 with an APR between 4.6-29.99%. Plus, most people are able to pay them off within three to five years, which means you won’t be paying mostly interest for 10-plus years attempting to put yourself in a better financial position.

Getting Out of Debt — Step 1 of “Financial Fitness”

Anna Counselman, Co-Founder of Upstart, explained that her company’s mission is centered on helping borrowers achieve a positive change in their personal financial position, or what Upstart refers to as “financial fitness.” While it’s pretty easy to be aware of your physical fitness because it’s quite literally looking back at you in the mirror, it’s not always easy to know where to look to gauge financial fitness.

Anna Counselman, Co-Founder of Upstart, serves as the company’s Head of Operations.

Most people use their credit score and account balances as the statistics to complete their financial picture, but when I was a college freshman, I didn’t even know what a credit score was, let alone know how to raise it. And I’m not alone — according a recent report from the credit bureau Experian, Millennials have the lowest average credit score of any other generation at 625.

Upstart seeks to be the first stop on every young person’s route to financial autonomy by providing customized personal loans to help get borrowers out of debt faster and at better rates. Using other variables such as educational data — from your major to your GPA — and work history, in addition to more traditional aspects like your credit report and debt-to-income ratio, Upstart calculates a rate tailored to each person.

While there are minimum credit requirements for every applicant, Anna says Upstart is able to get a better picture of each prospect because of the additional information her company reviews. Therefore they can offer personal loans to individuals who might not otherwise qualify through a more traditional platform like a neighborhood bank.

Google Influences Challenge Upstart to be the Best Lender

When working together at Google, Anna was talking with Dave Girouard about an upsetting trend: “We realized young people just have such limited access to capital,” says Anna. “The only people lending to them are credit card companies, which do so in a predatory way, and the government, through student loans.”

Anna and Dave partnered with Paul Gu to create Upstart in 2012 as the disruption to that trend. They had seen such success in hiring young folks with minimal work history into Google by looking at other variables like education, that Anna and Dave wanted to bring that well-rounded model to the loan space for people with minimal credit history.

From the beginning, Anna’s concept of company culture — “It’s about taking great care to hire the right people” — has shaped the very core of her business as Upstart takes great care in loaning to the right people — “We’re looking for a diamond in the rough.”

In creating their brand, they decided to bring over a lot of what they enjoyed at Google to their new venture with Paul, and that included a dog policy.

At Upstart, team members can bring their dogs — or “Pupstarters” — to work, helping elevate office energy and lower work-related stress.

“Dogs have been shown to make people happier at work,” says Anna. “We refer to our team members as Upstarters and our dogs as Pupstarters.”

However, Anna assured us that even with a couple of dogs running around the office for relaxation and inspiration, the 80-strong staff at Upstart remains dedicated to their mission of “financial fitness for all.”

Luckily, I graduated from college without debt (being debt-free is the first step to financial fitness, according to the Upstart “financial fitness for all” philosophy). Once you’re out of debt, you can begin thinking about other healthy financial habits, such as building your credit score, making significant changes to budgeting and saving habits, and planning for investment goals.

Nearly 80% of the personal loans Upstart issues are for credit card consolidation as part of a plan to get out from under really expensive debt (credit card interest rates are typically some of the highest you’ll pay). Anna explained that Upstart secured differentiated underwriting targeting a demographic of younger borrowers early in their career or with little credit history in order to offer more options.

“They can typically get a better rate with us because we take into account so much more than some of our competitors,” she says while detailing how borrowers often save on average 28% over their credit card rates.

Not only was Anna’s team crafting Upstart to cater specifically to the needs of their borrowers, but they wanted to take it a step further by creating a seamless transactional experience, something she described as “auto-magic.”

Like other tech companies, Upstart is hyper-focused on getting the customer experience right, which Anna says she believes starts with how the software works, in order to be the easiest lender to work with. The product has to function first so problems never make their way to the end user. From the snappy feel of the website to the minimal documents required for sign-up to the quick analysis of personal details — Upstart has created a process that Anna is proud of.

“The customer experience is something very near and dear to my heart,” she says. “And hopefully, as we grow as a company, we can do even more by providing other financial offerings to help people live more financially fit.”