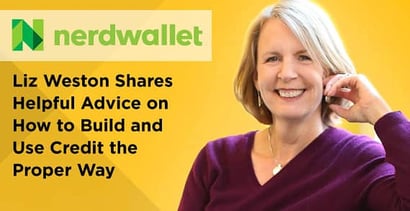 In a Nutshell: Revolving debt recently reached a historic $1.023 trillion in America. While mounting debt or past negative experiences with credit products may cause some to shy away from using credit altogether, a total abandon-ship mentality can actually hurt you because of the effect credit scores have on your financial life. To find out some tips on the responsible use of credit, we recently reached out to Liz Weston, the award-winning personal finance columnist, author, and a key contributor at the consumer finance website NerdWallet, to discuss credit card and debt issues. She offered her advice on personal finance, the importance of credit cards in building and maintaining good credit, and how to ensure credit works for you — instead of the other way around.

For anyone who doesn’t follow the Federal Reserve Bank’s monthly consumer credit statistics — believe me, it’s fascinating — you may not be aware of the most recent report.

The data from the first quarter of 2018 on total revolving credit owed was recently released, and Americans have surpassed the peak outstanding debt level from just prior to the Great Recession. To put it in simpler terms, Americans now owe more in revolving credit debt ($1.03 trillion) than they did just before the near-collapse of the economy.

While the figure is staggering, what does this mean for the average American consumer? Let’s take a look at some recent data from the US Census Bureau and the Federal Reserve.

It’s no wonder so many consumers, and especially younger Americans, have a fear of credit cards. According to the Consumer Financial Protection Bureau (CFPB), only around half of millennials, or those ages 18 to 35, had a credit card in 2015. That compares with between 60% and 80% of people over the age of 35 who had one. So, is this a problem? It can be, according to award-winning personal finance columnist, commentator, author, and NerdWallet expert, Liz Weston.

“These folks came of age during and after the financial crisis, so that would make them understandably a little wary,” Weston said. “Many of them have higher debt due to student loans, and they haven’t had the income growth previous generations had.

A regular commentator on popular radio and television financial shows, Weston knows a thing or two about personal finance and credit.

Among her many books are “The 10 Commandments of Money: Survive and Thrive in the New Economy” and the national best-seller, “Your Credit Score,” among many others.

We had the privilege recently of chatting with her about a range of personal finance issues, including the state of financial education in the US, the importance of credit cards in building and maintaining good credit, and how to ensure credit works for you, instead of against you.

“It’s unfortunate that many millennials are equating credit cards with debt,” Weston said. “They don’t understand that you have to have and use credit to get and to keep a credit score. Of course, the smart way to use credit cards is not to carry any debt.”

The fear associated with getting over your head in credit card debt is valid and logical — especially for those who have seen it happen. The solution then is to separate the anxiety over debt from the rational understanding that this is something you have control over. By recognizing that your beliefs and attitudes around personal finance may be based on misconceptions, you can start teaching yourself better methods of approaching the issue.

Many parents lack financial literacy themselves, so expecting them to impart the knowledge to their kids isn’t the answer. What about schools?

“Here’s the problem; of everything we’ve tried in the school system, nothing has worked,” Weston said. “Financial education in schools isn’t working. It isn’t changing behavior. For one thing, it’s abstract to them. They don’t have a lot of money to deal with, and trying to teach them anything about the world outside is really difficult.”

So, if financial education in schools isn’t the answer, what is? Weston believes that what works best is just-in-time education — the type of timely information people find through trusted online resources when they need it.

“When people are interested, they’ll seek it out and educate themselves,” she said.

That said, Weston explained that there are a few things consumers can teach themselves. The following are tips she would give parents on how to best prepare their kids for leading responsible financial lives.

Consumers have control over their spending, and they should be aware of the consequences forover-using credit. Treat it just like cash, and plan to seldom — if ever — carry a balance on your credit card.

This means being wary of advertisements, and realizing they’re trying to sell you something. Also, learn how to shop around and figure out the best deals.

Never buy on impulse, but rather ask yourself if you really need this thing. Finally, if the answer is yes, plan your purchase and find the best deal on it you can.

Building a Habit of Saving

A recent report from the Federal Reserve revealed that nearly half of Americans can’t come up with $400 in an emergency without borrowing or selling something. That makes building a savings a vital lesson to learn.

As Weston advises parents, “If you do nothing else, get your kids in the habit of putting aside some portion of everything that comes in.”

Put Your Credit Cards to Work for You

You have to have — and use — credit to get and maintain a healthy credit score, Weston said. One way she suggested of making your credit cards work for you is to put a small recurring monthly payment on your card, such as your Netflix or Pandora account. Next, set up autopay from a bank account for this amount to pay your credit card bill. This will show usage and build a history of on-time payments.

“The autopay part is really important because missing a payment will undo everything you’ve done,” Weston said. “The credit-scoring formulas are incredibly sensitive to missed payments. You can lose up to 100 points off your score with a single missed payment.”

Setting your credit card accounts for autopay and never charging more than you can afford to pay off in full each month is a solid strategy for building your credit score.

This is one strategy for using credit cards that doesn’t involve debt. Another way is to apply for a secured credit card. For someone starting out, this may be the only avenue open to you in terms of getting a card. This type of credit card requires a deposit to be made in the amount of the line of credit, but usage will be reported to the credit bureaus just as any other type of credit card and will help to build a good credit score.

When it comes time to apply for a standard credit card, it can be beneficial to look for one with no annual fee. The APR is less important, because you shouldn’t be carrying a balance, anyway.

It is important, though, to keep track of your credit utilization ratio. That’s the amount you charge on the card as a percentage of your available credit line. Even if you pay in full each month, having a high credit utilization rate can hurt your scores. Weston recommends keeping careful track of how much you charge. Try to keep balances as low as possible. Below 30% is good, below 20% is better, and below 10% is best.

“Most credit cards have the ability to get balance info via text, and you can have it sent out to you with alerts,” she said.

People may not even realize just how important credit scores are in their lives. It’s not just about whether you can get a loan or the interest rate you’ll be charged. It’s also how much you pay for insurance, what cellphone plan you qualify for, the amount you’re charged for utility deposits, and even whether you get approved on a rental application. The importance of a good credit score can’t be overstated.

Once you have built up a quality credit score and developed a habit of on-time payments with low to no balances each month, it may be time to think about applying for a rewards credit card. Rewards-program credit cards, when used properly and responsibly, come with major perks. Earning cash back, free airline travel, and even upgrades or free hotel stays are some of the benefits that come from maintaining a good credit score.

“When you play the reward points game the right way, you can get some amazing rewards and amazing experiences that you wouldn’t necessarily ever use your own money for,” Weston said. “But this can be a great carrot when you’re starting out — knowing what is possible out there.”

We greatly appreciated Ms. Weston’s time and her valuable insights into the world of credit and consumer finance. Her expertise and straightforward advice have helped make her one of the most widely read personal finance experts out there. We’ll leave you with one of the final points she made in our conversation, and something those who have previously struggled with credit should keep in mind.

“Credit scores are changeable,” she said. “Just because you screw something up, it doesn’t mean its permanent. You can always bounce back.”