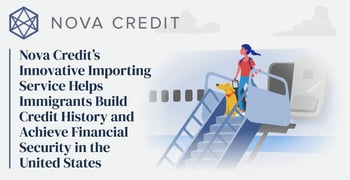 In a Nutshell: When immigrants come to the United States seeking opportunity, they often face an uphill battle in building a credit profile. But Nova Credit can help them expedite that process by accessing their foreign credit histories and providing that information to domestic institutions. That can help newcomers acquire loans and lines of credit that may otherwise be out of reach. This opens the door for individuals to build a positive credit score and gain access to financial products, allowing them to prosper in America.

Nicky Goulimis was a British-Greek immigrant who came to the United States to pursue a graduate degree at Stanford University. But, like many other newcomers to the U.S., Goulimis found trouble acquiring access to financial services in pursuit of her MBA. Despite having a positive credit history back home in the United Kingdom, she couldn’t obtain an auto loan in America without a co-signer.

Goulimis found that, even when they have a positive credit history elsewhere, immigrants may suffer because they lack a U.S. credit score. Without that, they’re often unable to access essential products and services that many Americans take for granted.

So Goulimis and two of her classmates decided to come up with a solution to the problem. It began as a class project, but in 2016, it evolved into Nova Credit, a new way for immigrants to establish credit in the U.S.

“Nova Credit is the premier cross-border credit reporting agency because no one’s really doing this,” said Akinyi Ochieng, from Nova Credit’s marketing team. “There are global bureaus, like Experian, Equifax, and TransUnion, but we can serve a much larger share of the immigrant population than they could on their own.”

This service allows immigrants to bring their credit history with them to the United States and leverage it to obtain loans and lines of credit. Rather than starting from scratch when they arrive, they can enjoy a head start on establishing themselves and building their lives in America.

Helping Establish Positive Credit in as Little as Six Months

According to Ochieng, moving across borders doesn’t cause people to fundamentally change their financial behaviors, so scores typically translate well from one country to another.

“When immigrants come to the U.S., the lack of domestic credit history can prevent them from starting their own life in the states. Without a U.S. credit history — whether you’re getting an apartment lease, a cell phone plan, or student loans — all those things are harder, if not impossible.”

Options are limited for newcomers in those situations. They can get a secured credit card and use it to build a credit history, become an authorized user of a friend or family member’s card, or have someone else act as a co-signer on a loan. But in all of those cases, the process of building credit will still take years.

Nova Credit acts as an intermediary between domestic and international credit bureaus, effectively serving more immigrants than other organizations could on their own. As a result, immigrants can potentially reduce the credit-building time frame to six months or less.

“We’re working with providers like American Express so that you have the option to select, ‘I’ve lived outside the U.S. in this country’ on applications,” Ochieng said. “That enables the credit card provider to opt into Nova Credit’s API and pull that foreign credit report data, which we translate into a score that is familiar to them.”

Credit reporting works differently around the world. For example, in Germany, only negative marks are recorded. Residents start their financial lives with perfect credit. If they make responsible decisions and timely payments, they maintain that score. If they make any missteps, their score decreases.

Ochieng said translating that sort of system into a U.S. equivalent is a challenge that Nova Credit addresses for each individual country.

Nova Credit wants to support immigrants from as many countries as possible.

Nova Credit does not issue lines of credit or loans itself, and the information it collects and translates does not automatically establish a U.S. credit history. But it does help immigrants apply for products and services that require a credit history. And by using those products responsibly, people can build a positive reputation faster.

“We’re pulling these reports in real-time because an issuer wants to make a decision as quickly as possible, particularly for online applications. Through technology, and the access to data and the sophistication of the analytical tools we have available, we can provide this solution,” Ochieng said. “We translate that data into a U.S. equivalent score to give those underwriters a format they’re familiar with when evaluating applications for credit products.”

Financial obstacles, including a lack of a credit score, are just one of the challenges facing immigrants in the U.S. But they can exacerbate other necessities like finding housing — even when renting. That is a problem that Ochieng has firsthand experience with.

“I moved to the U.S. from England as a small child,” Ochieng said. “Although my parents had been homeowners in the UK, they weren’t able to get a mortgage after our move because they lacked a U.S. credit history.”

Of course, finances are not the only challenge immigrants face. The legal and social processes of immigrating, integrating, and naturalizing are complex and difficult to navigate, especially when dealing with pressing financial issues.

Nova Credit provides a knowledge base that helps users learn more about America.

“Moving to a new country is hard, and credit is one aspect of it, but there are other ways in which we can help make people’s lives easier. That could be figuring out the complex visa processes or how finances work in the U.S.,” Ochieng said. “I think the staff on our team — many of whom are first-generation immigrants — have a lot to do with that approach. Not only is it a business imperative for us — we want people to view us as a one-stop-shop for all their immigration needs.”

Fostering Financial Inclusion for People Around the World

Goulimis and Ochieng both came to the United States from the United Kingdom, and when they did, a service like Nova Credit didn’t exist. The Nova Credit team’s experiences have given them the knowledge and motivation necessary to help newcomers avoid problems and achieve personal financial success faster.

A significant component of that mission is expanding the roster of countries Nova Credit supports. One of its priorities is to ensure those nations are geographically diverse and reflective of the fabric of the U.S. population.

“For example, the African immigrant population is one of the fastest-growing in the U.S., so we recently added a capability to support immigrants if they have a Nigerian credit history,” Ochieng said.

Another major piece of Nova Credit’s strategy is its partnerships. Nova Credit seeks to show domestic financial companies that immigrants are a growing consumer base and will become vital to success in the future. By helping financial service providers serve those consumers, Nova Credit helps secure a stronger future for immigrants and the economy as a whole. And Nova Credit’s mission won’t stop there.

“We’re trying to provide a single global solution starting in the United States, which has the highest share of immigrants in the world,” Ochieng said. “We’re also trying to understand what the general path to financial inclusion and financial access looks like for the global immigrant population.”

3 New Year’s Resolutions for Your Credit