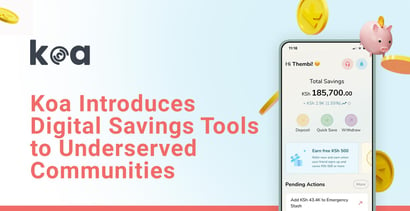 In a Nutshell: Koa puts savings tools in the hands of Kenyan consumers who want an easy way to leverage the power of their money. The app incentivizes savings by reminding customers to save and rewards them with daily compounded interest rates of up to 10% annually. The money customers put into their Koa account is protected with bank-level security, and users can add or withdraw funds at any time.

West Africa is where Koa Co-Founder and CEO Alexis Roman grew up and wants to raise his family. Roman has experience in finance, working with French banks to create systems that help invest in its customers’ retirement accounts. During that time, Roman became fascinated with fintech companies and what they can accomplish.

Despite being the third-largest economy in sub-Saharan Africa, Kenya only has a savings rate of 12%. That is by far the lowest in all of Africa. Roman saw this issue as an opportunity to create solutions.

“You will find people mostly saving informally, either in their mobile money wallets, under the mattress, or within their communities. This way they are cultivating a savings habit, but they are not seeing their money grow with time. In fact, they lose money long-term due to high inflation rates of 5-7%,” says Roman. “Banks in Kenya offer very low-interest rates of 2-3% so most people are not able to keep up with inflation.”

Roman teamed up with Delila Kidanu to create Koa in 2020. Koa is a mobile savings tool that people in Kenya can use to create goals and save for their future. More than half of the people in Kenya have a smartphone, which makes a mobile application the perfect platform for saving.

Koa builds on the mobile money operator, M-Pesa, that revolutionized mobile money and created a digital economy in Kenya. Users deposit money into their Koa accounts using the M-Pesa system, which provides transaction services through a SIM card.

Koa does not charge any fees for deposits into the app but has recently introduced a minimal withdrawal fee to encourage customers to save their money long-term.

Moving Away From Harmful Loan Cycles

Payday-like loans are a burden to people all over the world. These are high-interest short-term loans that can cause a cycle of dangerous lending if they’re not paid off immediately. Lending companies in Kenya push these uncollateralized loans, and people use them because they believe they are their only option to afford their bills.

But Koa and its founders believe that savings are the cornerstone of a strong financial foundation, and they have created a space that makes it easy to save and access money.

The company told us that many of its users would open multiple accounts with different institutions so they could save the way they wanted. Koa compartmentalizes the saving process so users can set up different goals, create their own saving plans, and make payments within seconds.

The app helps users stick to their savings goals by sending them regular reminders, encouraging them to deposit their savings. Once they build a strong financial foundation, users develop a long-term commitment to the company. Users can save as little or as much as they want, and the money in their accounts grows with annual interest rates of up to 10% that gets compounded and added to their account daily–providing customers visibility over their money.

Getting people to save is only half of Koa’s core proposition. Koa users learn how to capitalize on savings and create opportunities for themselves and their families with the company’s financial literacy resources. Its blog routinely publishes articles that offer tips to help users take the next step in securing their future with responsible money management

“Interestingly, we see a lot of users read these articles, and then go on to deposit right then,” Roman said. “The process builds that extra trust with the customers. They feel like we’re not just there to take their money and help them save, but we’re actually there to help them live a better financial life.”

Koa is working to buck a trend of consumer distrust of financial institutions. The company makes all of its processes transparent so its customers see exactly what’s happening with their money. When money is deposited into their account, it stays and grows in the account and doesn’t go anywhere unless the user pulls it out.

The company wants people to know that its platform is flexible and accessible and that users have full and total control over their money the entire time. Roman told us that many users deposit a small amount when they first sign up to understand the process and take it all out to make sure the app isn’t a scam. Users deposit larger amounts of money once they see that they can do what they want with their money.

“When you withdraw, you will see the withdrawal come in,” Roman said. “There are no gimmicks around you being able to access your money. Transparency is critical to us and it’s really what we’ve been working on.”

Money in the account is secured by what Koa calls bank-level security with 256-bit encryption. All of its partners are vetted and approved by regulatory authorities in Kenya. The company also promises to never sell or share private information with any third-party vendor without consent. Giving back control to customers on their funds and financial future.

Koa relies on building trust with users and communities through word of mouth. In Kenya, people are more likely to use a product if it’s recommended to them. To this end, Koa hosts customer lunches as well as virtual financial literacy sessions throughout the region to get a better understanding of what its customers want and enable them to make better financial decisions.

“We’re building more of that community feel with our early users, and now doubling down so we can keep growing,” Roman said.

Koa is committed to providing its critical financial services to underserved communities. But Koa also listens to its user base so it can expand and improve user services. The company said it is in constant communication with users, even calling each of its customers one by one to get their feedback.

“We felt like the saving space was the best way to build trust with the customer very early on,” Roman said. “It was the best way to provide value directly to the users. From there we are layering other financial services that help our customers grow.”

The company is looking to expand to other markets outside of Kenya. The issues that prompted Roman and Kidanu to create Koa are also present in neighboring countries.

“The problems that we’re trying to solve here are the same problems we see in communities in other countries,” Roman said. “For us, we see it as a potential expansion opportunity.”

Koa conquered its biggest challenge when it created its system from scratch. Now, the focus is on creating more opportunities for users to save and receive access to common financial services.

“Our focus early on was just creating that savings experience,” Roman said. “We give people different ways to save and plan to layer services such as lending and investments on top. But we are still driven by customers and their insights and by what they want.”

Koa has found a good balance between aligning incentives with regulators and its corporate shareholders, which Roman and Kidanu believe will help build the vision for the future of Koa.

The company is currently looking into adding a group savings feature that would allow multiple people to contribute to a savings goal. It is also planning a complete rework of the internal flow to significantly reduce transaction costs and improve the speed of deposits and withdrawals.