Portify: An App to Help Near-Prime and Modern Workers in the U.K. Build Credit and Access Quality Financial Products 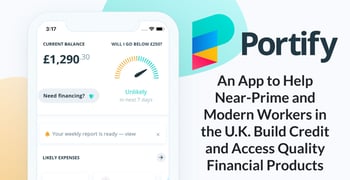 In a Nutshell: Traditional finance products were designed around a credit score and a consistent paycheck. But in today’s gig economy, service or freelance workers often depend on paychecks that may vary from week to week, making it difficult for them to enter the prime credit space. Portify is a U.K.-based app aimed at helping these workers build credit and access fair credit products, and eventually enter the prime credit space. The app analyzes users’ finances and lets them know when their funds are running low or if a major bill is approaching. The premium version also gives users access to up to £250 in interest-free financing to help them avoid high-interest payday lenders while building credit.

Having ridden for U.K.-based company Deliveroo, Chris Butcher and Sho Sugihara learned a lot about the gig economy.

But Butcher and Sugihara weren’t dependent upon Deliveroo for their livelihoods. The entrepreneurs were doing on-the-ground research for their new company, Portify. Butcher and Sugihara wanted to immerse themselves in the gig economy and really understand what it’s like for today’s modern worker, to help them build the financial app for that demographic.

And learn, they did.

“Just hearing the stories from other drivers, hearing about how they think about their money and the types of products that they have to use were eye-opening,” said Kaoru Fujita, Portify’s Head of Growth. “Portify is really an ode to what they’ve had to go through.”

Butcher and Sugihara combined their Deliveroo experiences, tech backgrounds, and vision for an impactful financial app to create and launch Portify in 2017. Since then, the company has been refining its app and learning how to deliver the most benefits to modern workers.

As a reminder of the company’s mission, Butcher’s and Sugihara’s Deliveroo uniforms can still be seen in Portify’s London office.

“Really, our hope is to get these workers to a place where they are financially healthy and able to pursue their financial dreams,” Fujita said. “A lot of them tell us about wanting to buy homes or wanting to buy a car, so that’s what we hope to be able to accomplish for our customers.”

“The main mission of Portify is to help near-prime consumers and modern workers — generally — access fair financial products,” Fujita said. “In the U.K., there are 10 million near-prime consumers. On the other hand, we’re seeing this gig economy, this flexible, unconventional worker segment growing at a fast clip.”

Currently, the U.K. has around 5.8 million of these modern workers, he said, and it’s growing exponentially.

Kaoru Fujita is the Head of Growth at Portify.

And Portify is working to identify the products that can help these consumers access fair financial loans and ultimately improve their credit so they can become prime consumers and eventually access prime credit products, Fujita said.

Fujita said Portify actually began life as a B2B company, with the idea that companies would offer its app and services to their workers. But after learning about the scope of the gig economy and workers who are essentially self-employed, Portify shifted its focus to become a B2C company — delivering its product directly to consumers.

Since shifting its focus directly to consumers in 2019, Portify has onboarded about 50,000 users, Fujita said, and its user base continues to grow quickly.

“We saw that a lot of financial products were originally built to rely on people’s credit scores and also, basically, consistent paychecks,” he said. “So, if you’re making, say, £36,000 a year with a conventional job, you could see on every single paycheck that you’re making £3,000.”

This paradigm doesn’t work well for delivery drivers or freelancers who may bring in £2,000 one week and £200 the next, Fujita explained.

“A lot of our customers have this unconventional salary,” he said. “So, what we have to do is identify how to think about financial products in a way that could work for people that have these uneven earnings.”

Workers in the U.K. can download the Portify app for free and gain instant access to a number of financial tools. Users also have the option to subscribe to Portify Prime for £6.99 per month (less than the cost of a Spotify subscription as Portify points out) and get access to all the app’s credit building features.

“More people are working on their own terms than ever before, but the financial infrastructure to enable them doesn’t exist,” according to the company website. “Portify is building this infrastructure from the ground up.”

Portify Co-Founders Sho Sugihara and Chris Butcher rode for Deliveroo to get a better sense of the gig economy.

One way Portify is doing this is by taking advantage of the U.K.’s open-banking laws that allow licensed startups to access transaction information to the benefit of consumers.

“Based on analyzing a customer’s banking history, their typical salary, and their purchasing habits and bills, we can predict when they may hit a point where their budget might be hurting or alert them to a low balance in their checking account,” Fujita said.

With the premium tier, Portify users can access up to £250 in interest-free financing, according to the company.

“No matter who you are, where you’re from, and how you earn, if you’re hard-working and determined, we give you the financial support you need to achieve your dreams,” according to Portify.

Fujita said that, in offering premium users the £250 interest-free loan, Portify hopes to help consumers build credit and help them avoid having to turn to payday lenders that charge exorbitant interest fees.

Of course, any time consumers allow a company to access their financial information, it’s understandable that they want to know their information and funds are safe and secure.

Fujita said Portify is GDPR-compliant, referring to the E.U.’s General Data Protection Regulation and the IT infrastructure further helps to ensure that the consumer data is kept safe. Additionally, Portify’s terms and conditions are written in plain English so users know exactly what to expect from the company in terms of keeping their data safe, he added.

The Portify app alerts users when they are approaching a low balance in their checking account.

Portify is also authorized and regulated by the Financial Conduct Authority, it uses bank-grade security practices, and is IASME Cyber Essentials-certified, which means its systems are routinely penetration tested by external security firms. Finally, Portify has read-only access to users’ financial data, which means it cannot actually access its user funds or move money.

In addition to prioritizing security, Portify prides itself on its user experience and user interface on the platform, Fujita said.

“We tried to make the app as simple as possible for our users so they understand exactly what to expect from us,” he said.

And he said the company monitors user reviews on platforms, including Facebook, TrustPilot, Google Play, and the Apple Store, and factors customer feedback into its planning.

“We also have a team of very experienced data scientists who are constantly learning about machine learning and consistently improving our algorithms, and using the data that we have to make the best decisions for our customers,” Fujita said.

Customers save an average of £110 in overdraft fees each year, he said.

The app has been life-changing for some of its customers, Fujita said. Some have gone from relying on payday lenders to fill in gaps between paychecks to relying on Portify to help them save money and access interest-free loans.

A Recent Partnership with Experian Will Provide New Credit-Building Products

Fujita said one of the most exciting developments for Portify is its recent partnership with Experian.

“I think that will open a lot of doors for us in terms of offering more ways of boosting credit for our consumers as well as the types of products we can offer by working with Experian,” he said.

Portify’s partnership with Experian was signed in early 2020 and the company expects to be rolling out new products based on the partnership later in the year, Fujita said.