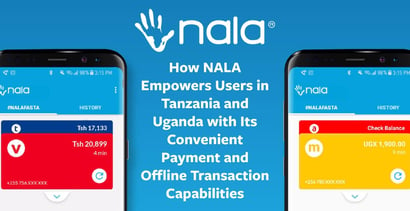 In a Nutshell: In Tanzania and Uganda, many people must rely on their cellphones, which essentially serve as banks, as their primary avenue for managing their money. They make payments and conduct other transactions using cumbersome methods across multiple accounts, without ever really being able to track their finances. NALA is an app that is solving these problems with features that allow users to make transactions — even without a data package — and see their history all in one convenient place. The company is empowering East Africans to take control of their finances and delivering more transparency to their funds than ever before. NALA also supports Tanzanian entrepreneurs with its annual business plan competition that awards one winner with 10 million Tanzanian shillings.

Benjamin Fernandes was a teenager when he gained fame in his native Tanzania as a TV host. While many people would want to ride that early success into a career in entertainment, Fernandes chose a path that would lead him to impact lives in a much different way.

His journey would lead him to school in America, reporting on the 2012 Olympics in London, and finally, back home to Tanzania where he may be positively affecting more lives than ever with his latest project — the NALA app.

Fernandes was working in television when mobile money started to become popular in East Africa around 2008.

The young host transitioned into the payments space and was on one of the first teams to build a TV subscription integration that allowed customers to pay for their TV services using mobile money, he said.

“That fascinated me,” Fernandes recalls. “I remember wondering what else could be done in the payments industry and how it would change over time. So, that’s what really sparked my curiosity and got me more and more into the industry to learn more about how it would evolve and impact people.”

Fernandes returned to his role as an on-air personality, and in 2012, he had the opportunity to fill in for a news anchor at the London Olympics.

During this time, he was also attending college in the U.S.

Despite his potential for a career as a television personality, Fernandes decided to continue his education after earning his bachelor’s degree. He became the youngest African ever to be accepted into the Stanford Graduate School of Business where he earned his MBA. He would go on to work for the Bill and Melinda Gates Foundation and complete the Executive Education program at Harvard’s Kennedy School.

“I never thought I’d get into entrepreneurship but being surrounded by so many people (at Stanford) that push you to do better and succeed and push yourself harder, I got the bug in my head thinking that maybe I could do something,” he said.

This impressive journey led him to where he is today — the Founder and CEO of NALA, the app that makes mobile payments safer and easier than ever for users in Tanzania and Uganda. NALA recently became the first East African company to be selected to attend Y-Combinator in their Winter 2019 batch, receiving a $150,000 investment.

Answering a Need in the Tanzanian Marketplace

When Fernandes finished graduate school, he had multiple, well-paying job offers to stay and work in the U.S. But he said that he ultimately felt a stronger pull to return to Tanzania and build something that would benefit the people in his home country.

“The first thing I did was spend two-and-a-half to three months just interviewing people — close to 700 people within that time period. And I learned three things,” Fernandes said. “First, even though there’s a growth in smartphones, not everybody has access to an active data connection because data is expensive.”

Benjamin Fernandes is the Founder and CEO of NALA.

Although this finding makes sense, Fernandes explained that this was actually a big discovery when he conducted his interviews.

Secondly, he learned just how significant it is that many Africans own more than one SIM card. He said the average African owns 1.96 SIM cards, according to the Global System for Mobile Communications.

“Your SIM card is your bank account in most of Sub-Saharan Africa because you add cash to your SIM card,” Fernandes said. “And that’s how you send money to your friends.”

Finally, Fernandes connected how these multiple SIM cards lead to massive fragmentation of people’s funds and how difficult it is for people to track their money.

“Over 95% of the people we interviewed couldn’t tell us how much money they spent the previous week because there was no place or tool that people had that gives them an overview of how they’re using their money,” he said.

Tanzanians managing funds with a digital device were also limited to using the Unstructured Supplementary Service Data system. Fernandes explained to the Stanford Graduate School of Business that this required users to type up to 46 digits into their phones to make one peer-to-peer payment.

Fernandes laid out the above challenges and explored whether they could build a single interface that allows people to access all their accounts through one service, even without a data connection.

“And that’s what we’ve built,” he said. “NALA is a mobile money application that allows you to make payments, pay friends, and purchase airtime without a data connection across all your accounts in Tanzania and Uganda.”

Developing NALA was not only about delivering its functionality to the people of Tanzania and Uganda, Fernandes said. It was also about empowering people.

“How do we give the decision-making process back to them? How do we create transparency and show them how much money they have spent across all their accounts or how much they’re paying in fees?” he asked.

This led to the development of what he said is one of the most powerful tools within NALA — the transaction history tool.

“We try to make finances clear and transparent,” Fernandes said. “In Tanzania, you can’t receive your transaction history for free. You have to pay for that service. We allow people to see all their transactions that they’ve done. People always tell us it’s one of their favorite tools because now they can actually see how much they’re spending.”

“We’ve done that in record time — faster than anybody has ever built two markets for fintech in East Africa,” he said.

Fernandes and the NALA team’s ethos of empowering people and improving East Africa is not only evident in the NALA app. In 2019, the company ran its first Mama Kasema competition for Tanzanian entrepreneurs.

The competition’s full name — Mama Kasema: Kujifunza Ni Mtaji — translates in English to Mama Said: To Learn is to Find Capital, and was a business plan competition aimed at helping the winning entrepreneur start or grow his or her business.

“The purpose was not only to provide a monetary grant of 10 million shillings (approximately $4,350), but to also impart some of the product, user interview, and general business insights that our team has acquired over the course of our journey,” according to a Medium article from NALA.

The company called for entrepreneurs to submit their business plans online and gather NALA product feedback from at least 10 of their friends who use the app.

“Gathering this product feedback was, of course, helpful for our product team here at NALA, but in addition, it served as an opportunity for these budding entrepreneurs to practice collecting user feedback/conducting user interviews,” according to the article.

During the one-month open submission period, NALA received more than 2,000 business plans and 1,100 product feedback submissions from all over Tanzania, far exceeding the company’s expectations.

The submissions were narrowed down to 20 finalists who were invited to Dar es Salaam — where NALA is based — for a feedback session and final review.

The winner of the inaugural entrepreneurial competition was Samweli Kisinga, a former teacher who left his career to pursue his passion for environmental conservation.

“Samweli and his team collect trash and recyclables from their community and use it to create ceiling boards and roofing decorations,” according to NALA. “We are excited to support his journey and we will provide close mentorship to him throughout the year.”

NALA plans to run a similar competition each year to help support and give back to Tanzanian entrepreneurs.

With the company’s fast growth rates in Tanzania and Uganda and Fernandes’ passion to deliver positive change in East Africa, NALA is already making a big difference in the financial lives of East Africans and appears poised to do so for years to come.