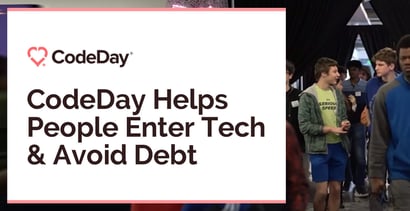 In a Nutshell: Careers in the tech industry have long been dominated by Silicon Valley movers and shakers. But people across the U.S. possess the potential to make great contributions to the tech world, even if they don’t fit into the Silicon Valley mold. CodeDay helps underserved populations gain access to this world, giving them a leg up in bringing their ideas to fruition and securing a solid career that can help them avoid debt. The company offers a variety of programs aimed at high school and college students that give them a chance to dive into the world of computer science and connect with leaders in the industry.

It’s true that on paper, the U.S. is a country of equal and limitless opportunities. But in reality, many systemic problems exist that prevent certain U.S. residents from having true equal opportunities when it comes to education, jobs, and even how they’re treated on a day-to-day basis.

Like many industries, the tech sector has often overlooked minorities and underserved populations when it comes to opportunities in the field. Many factors contribute to this problem.

Affluent households and schools can afford for their students to have access to modern computers and tech-related education. Meanwhile, the next Bill Gates may never have a chance to wield his or her talents simply because they never had a computer to tinker with during their formative years.

Having access to a computer and some tech education can mean the difference between a successful career and dead-end jobs that can lead to the burden of running from debt.

But thanks to organizations like CodeDay, people in underserved communities are able to gain opportunities in the tech world they may not have otherwise had.

“There’s a place in tech for everyone,” according to the organization. “CodeDay is a non-profit providing welcoming and diverse opportunities for under-served students to explore a future in tech and beyond.”

We recently spoke with Tyler Menezes, the Executive Director of CodeDay, about the nonprofit and how it helps reduce the barriers to entering the tech sector so people can more easily avoid debt.

Before focusing his efforts full time on CodeDay, Menezes explained that he spent plenty of time getting up close and personal with the ups and downs that come with working in the tech world.

“I actually did the whole Silicon Valley, traditional startup thing where I dropped out of university and wanted to start a tech startup,” Menezes said. “We basically made Periscope before Twitter made Periscope, and they kind of copied us, and they shut it down. It didn’t go any better for them than us.”

While working in Silicon Valley, Menezes became aware of a couple of issues that nagged at him.

Tyler Menezes is the Executive Director at the nonprofit, CodeDay.

“I realized that a lot of the people I was meeting were working on problems that didn’t seem like they were important to a lot of the population, so that was a little bit frustrating to me,” he said. “And, at the same time, I’ve been a volunteer for this nonprofit since the very beginning.”

Menezes said he and some friends started CodeDay while at college to help students from nontraditional backgrounds gain opportunities in tech.

He recalls one young man named Zaq at a CodeDay event who dropped out of high school and was working at Best Buy. He began chatting with the person in front of him in the lunch line at the event.

“It turned out that this guy was the CTO of a 100-person startup and basically offered him a job right there,” Menezes said. “Within about a year, Zaq was running the research and development arm of the company and is now in a senior leadership position at a different tech company.”

This was one of the stories that motivated Menezes to shift his focus from creating his own startups to focusing full time on CodeDay to help others gain opportunities in the tech industry.

“I grew it from a small, part-time thing to this full-time endeavor that was in 55 cities the last time I counted,” Menezes said.

Menezes explained that CodeDay consists of a number of different initiatives, with a large part of its work geared toward high school students.

“Primarily, we do an event called CodeDay, which is more focused on high school students. It’s the main thing we do at a local level that’s pretty individualized,” he said. “There’s a lot of stuff that we have standardized, but also there’s a lot of things that vary from city to city or country to country that are very hard to standardize so we give people a lot of flexibility in how they do those things.”

At these events, students pitch ideas for apps or games, then work in teams to bring their project ideas to life over the course of a weekend. The teams then present their projects to a panel of judges.

“Most students register with little to no interest in computer science, but 70% of these students continue coding for months after the event, 65% register for a CS class, and 48% pursue a CS major in college,” according to the CodeDay website.

More than 50,000 students have created projects at CodeDay events.

“What I appreciate most about CodeDay is the empowerment and agency it instills in its participants,” writes Chris Dovi, CodeDay Virginia Partner and Executive Director at CodeVA, on the CodeDay website.

Virtual Programs Educate Students and Pair Them with Experienced Mentors

“Another thing we do is we’ve done an online internship-style program where students work on open source software, and they get paired with real industry mentors,” Menezes said. “That program is targeted toward a college audience.”

Because this program has always been virtual, it is not localized like the CodeDay high school events, he explained.

“The advantage of something like that is by doing it online, and by not heavily localizing it, we give students who are in areas like Boca Raton, Florida, or Nashville, Tennessee, the same experience they would have gotten if they had grown up somewhere like Silicon Valley,” Menezes said.

This approach helps to level the playing field for a lot of college students, and especially for those from lower-income households or colleges that aren’t necessarily very well known, he said.

“Silicon Valley is such a bubble, and with the cost of living there being so high and the types of people it attracts, a lot of the problems that big tech companies are focusing on solving are not necessarily the problems the average American — or certainly the average worldwide citizen — have,” Menezes said.

In addition to opening up opportunities to more people from diverse backgrounds, programs that reach outside Silicon Valley broaden the scope of what kinds of fresh ideas are presented that can lead to innovative new technologies, he said.

At this point, there have been 482 CodeDay events and more than 56,000 people count themselves as CodeDay alums. More than 37,000 of those people reported that they didn’t like computer science before participating in a CodeDay program, and 69% kept coding after the program.

Increasing Opportunities for Careers in the Tech World

“For all the terrible things that happened in 2020, and for what a terrible year it was, one of the really nice things to come out of this from my perspective is that so many companies are moving to remote work,” Menezes said.

With these companies realizing that it’s possible to maintain a productive workforce outside of a traditional office environment, it opens up opportunities for a lot more people.

“There’s never been a bigger opportunity for people who want to break into the tech industry because every job is now available,” Menezes said. “If someone is reading this and they’re interested in technology and want to create something that can change the world, I don’t think there’s ever been a better time to do it.”

Whether you’re looking for a path to turning a world-changing idea into a reality or seeking a well-paying career to help avoid debt or get out of debt, CodeDay can help you along the way.

Paxful Allows Users to Pay and Earn Incentives with Bitcoin