Everex: A Stablecoin Platform that Facilitates P2P and Other Payments, Along with Fiat-to-Digital Asset Swaps 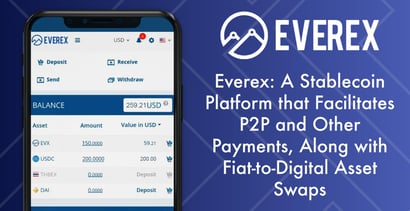 In a Nutshell: In recent years, a range of payment solutions have become available to merchants and consumers thanks to evolving technology. Still, traditional payment systems can be slow and tedious, and Everex aims to overhaul those systems by bringing them onto the blockchain. The platform uses stablecoins to facilitate P2P and other payment types with convenience and speed. The company will implement its EVX utility token to power the Everex ecosystem, which will give users an opportunity to save up to 50% on fees by using the token. Additionally, Everex will allow users to participate in lending protocols via decentralized finance technology, which holds the potential for returns of up to 10%.

Payments have evolved rapidly in the 21st century. Where cash, checks, and (much slower) credit card networks used to rule the space, technology has opened up payments to a much wider range of possibilities.

Today, the ecommerce world offers a variety of payment methods — from mobile to fiat P2P payments and even cryptocurrency — suited to nearly every type of consumer.

And payments are only getting faster and more convenient as more tech companies, such as Everex, enter the arena.

“The idea for Everex started, basically, with the goal to improve payments,” said Everex Founder and CEO Alexi Lane. “Traditional payment processing is just slow. It doesn’t mean it’s bad, but it was designed 30 years ago and not much has changed in that realm.”

Lane said that, at the time — around 2015 — there wasn’t a lot of research around certain use cases for cryptocurrency, so the Everex team began conducting in-depth research and development around its future product.

Lane said payments technology is always evolving, but Everex is currently focusing heavily on stablecoin, which was one of Lane’s earliest ideas for how the platform would provide value for users.

“My first idea was simply that money must be on the blockchain,” he said. “That’s what makes things run faster. At the time, there wasn’t even terminology for it. We called it e-cash, cryptocash. It was until basically last year that the word ‘stablecoin’ was minted.”

And for those who don’t know or need a quick refresher, Everex defines stablecoins as “electronic representation of national currencies that are issued on blockchain and can be used both for traditional payments and payments relevant only for cryptocurrency industry, such as trading and lending protocols.”

Lane’s vision was realized through the Everex wallet. Through partnerships and local service providers, the Everex wallet — which is secured by the Ethereum blockchain — lets users send, receive, earn interest and borrow money through decentralized lending protocols, and store stablecoins and other digital assets.

“Mainly, Everex serves as your payment gateway between conventional money and cryptocurrencies, using stablecoins as the means of exchange,” according to the company. “Our primary focus is to achieve fast payment settlements for different categories of customers, from individuals and small business owners to corporations and financial service providers.”

Lane added that the Everex wallet offers advantages over payment solutions, like PayPal and Alipay, not only in speed but in interoperability.

“Payment systems like PayPal or Alipay — they’re all closed-loop systems, meaning if you have Alipay and I have PayPal, we cannot communicate. The money exists inside those loops, and that’s a huge disadvantage for pretty much everybody,” Lane said.

The difference in using blockchain technology is that users don’t have to subscribe to a closed-loop system and the implementation of stablecoins lets users get around the potential volatility of cryptocurrency.

The EVX Token Will Power the Everex Ecosystem

Lane said that once it is implemented, the EVX utility token will power the Everex ecosystem.

“We have not yet integrated EVX in the wallet into our platform, but the principle is similar to most other exchanges,” he said. “Basically, if you use our wallet and you pay your fees with EVX, you will save up to 50%. So if you pay commissions with EVX, you will get all our services at basically half price.”

Alexi Lane is the Founder and CEO of Everex.

For those unfamiliar with how utility tokens differ from cryptocurrencies such as Bitcoin, think of how a casino’s tokens are used within that specific casino to power its games or its ecosystem. The tokens hold value within the casino but must be exchanged for use in the outside world.

The EVX token will also be used as a cashback reward point in a forthcoming product line, which will include a debit card, according to Everex sources.

“You can purchase EVX directly in the EVX wallet using bank transfers or swap them against your crypto assets,” according to the company. “You can also acquire EVX at a number of exchanges (see Partners section). EVX is currently being traded on Binance, Huobi, HitBTC, and many other major exchanges.”

All available EVX markets can be seen on the EVX page on CoinMarketCap.

EVX should not be confused with stablecoins in the Everex wallet, according to the company.

“The latter represents national currencies on Ethereum and allows Everex users to hold and transact these over blockchain as payment rail,” according to the website.

Lane said he believes that decentralized finance is going to be one of the next big things in the financial world.

“2017 was about ICO, 2018 was about stablecoins, and 2019 and 2020 should be about DeFi, or decentralized finance,” he said. “It’s really kind of mind-blowing stuff, and it’s very difficult, but we think we can make it simple for the end-user.”

He said the basic concept is that consumers can earn from 7% to 10% using decentralized lending protocols, which can be understood as an automated money market.

“Decentralized lending protocols enable lenders to deposit their digital assets into a smart contract,” according to the Everex website. “The contract then makes those funds available to hedge funds and margin trading pools willing to pay interest for access to liquidity (the digital assets supplied to the smart contract).”

Borrowers pledge crypto as collateral to be able to borrow money from the lending pools.

“Your interest is calculated with each block mined on the Ethereum blockchain,” according to the company. “Borrowers repay loans with interest to redeem collaterals.”

And users’ funds are not locked, Lane said, and they can access them anytime they want because it’s all powered by smart contracts.

“It’s really good, and guess what? To get to these lending protocols you need stable coins, and that’s where Everex comes in,” he said. “We don’t run our own lending pool. We aren’t in the lending business. But we like changing money. Remember, at Everex, everything is exchangeable.”

With an eye toward the future via cutting-edge technology like lending protocols, Lane and Everex are clearly focused on not only improving the traditional payments space but the world of finance in general.