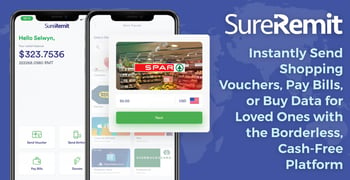 In a Nutshell: Immigrants can provide financial support for their loved ones back home easier than ever, thanks to SureRemit. The remittance platform allows workers in other countries to purchase shopping vouchers, pay bills, and buy cellular data for friends and family in their home nations. The blockchain-based platform is simple to use and efficient, and costs much less since it is not susceptible to many of the regulatory guidelines of traditional global remittance payment companies. Its blockchain core also makes SureRemit a great way to donate to charities because donors can rest assured knowing their funds are being sent directly to the charity of their choice.

The practice of moving from a less affluent country to a nation with more opportunities and higher wages — and sending money back home to support a family — is nothing new. Immigrants have been doing this for ages.

In the U.S., it’s not uncommon for Mexican workers to come to America to work in the labor force for a larger paycheck than they would receive back home for doing similar work. Traditionally, these workers would mail their paychecks — or a portion of their paychecks — home on a regular basis to support their families.

According to data compiled by the tech platform SureRemit, there are about 250 million immigrants around the world who send about $600 billion back home to support their families each year.

Eventually, traditional mail gave way to wire transfers which were faster and more secure but still came with their own problems, such as long lines, fees, and paperwork. Then came bank transfers, which can be time-consuming and unreliable.

Thankfully, companies such as the Nigerian-based SureRemit, are making it faster, more secure, and easier than ever for workers to financially support their loved ones back home with its cash-free technology platform.

We recently had the opportunity to speak with Selwyn Paehlig, SureRemit’s Global Venture Developer, who discussed the origins of the company, how it benefits both senders and receivers of remittances, and the technology behind it.

“SureGifts, a digital shopping voucher aggregator, pioneered the concept of gift cards in Nigeria, partnering with brands like Game, Spar, Samsung, and Jumia for their digital gift card program,” according to a BellaNaija article.

SureGifts’ structure and the way it allowed users to purchase gift cards led to the development of a system in which people could support their loved ones at a very low cost, Paehlig said.

“If I’m living in the Netherlands and I would like to support somebody  — a family member — who’s in Africa, how can I do that?” Paehlig asked. “I can transfer money via my bank. Sometimes that’s a very tedious process and it takes a long time. Money gets lost. And of course, there’s quite a high fee involved.”

The second option is to go to Western Union to transfer cash, he said. In this scenario, fees can easily be up to 10% of the amount being sent and recipients can spend nearly their whole day off work waiting in line to receive the money. Paehlig said criminals are fully aware of this in the countries where Western Union transfers are common, and they may rob the recipients because they know they just received a cash transfer.

SureRemit does away with all the hassle behind these options.

“Using SureRemit, recipients don’t have to travel and wait in long lines to receive an expensive wire transfer,” according to the company. “All they need is a mobile phone or email address.”

“We made remitting simple, safe and secure, free or very low cost (0% to 2%) and lightning fast!” according to SureRemit. “Choose from our (continuously growing) 1000+ merchant network and send vouchers to your family, friends, and loved ones all over the world.”

SureRemit senders also have the peace of mind in knowing exactly how their money is being used to support their friends or family members back home.

Additionally, senders also earn SurePoints with every remittance, which they can spend on exclusive SureMember deals and discounts.

Paehlig said that SureRemit is in the process of revamping the app which will make it more convenient than ever.

“We aim to go live in about two or three months,” he said. “I think it suffices to say that we’re preparing for significant adoption of our services in the remittance industry by making the app even easier to use by a non-crypto audience.”

Some of the features in the new app will include SureRequest where recipients of remittances can contact senders through the SureRemit app asking for support. The recipient can ask (for example) for a Spar voucher to do groceries by sending a SureRequest, the sender receives this request in-app and can send this voucher with just a few clicks, Paehlig said. This way, the SureRemit platform, and SureRemit App connects recipients and senders in such a way that remitting is a breeze.

It will also feature the SurePoints reward system, explained Paehlig. Users of the app earn SurePoints when using the company’s services. The points can be redeemed for deals and discounts, free transactions, and much more.

Finally, the app will include SureWallet where users can send “cash” to each other, according to Paehlig.

“For example, a sender sends (in-app) $100 to their loved one abroad, that person can then decide how to spend that money. Only to be spent on our services (no cash withdrawals possible),” he said.

The secret to SureRemit’s convenient capabilities lies in blockchain technology. While crypto tokens and the blockchain are not necessarily evident to users who interact with the frontend of SureRemit, the new technology is what is making it all possible.

“SureRemit is utilizing the blockchain and the Remit Token (RMT) to facilitate global remittances,” according to the company website. “If you’re a non-crypto user, we won’t bother you with all the details. It’s all done in the backend of our systems!”

Paehlig said blockchain wasn’t necessarily the focus of the platform, but it turned out to be the best way to accomplish Samuel-Biyi’s vision.

When the team started to think about how to build SureRemit, blockchain technology was beginning to enter the mainstream tech world, he said.

“They realized that, if they utilize blockchain technology, they can eliminate borders,” Paehlig said. “It doesn’t matter where you are as long as you transact via the blockchain. And you can remove additional intermediaries so you have a direct relationship between the sender and the merchant and the recipient of the voucher.”

SureRemit and its RMT tokens run on the Stellar payment network.

“Stellar is a highly sophisticated and secure platform that’s trusted by major banks and reputable companies such as IBM and Deloitte,” according to SureRemit. “Development and management of proprietary blockchain solutions carry certain security risks that the Stellar platform protects against.”

Additionally, many global payment gateways refuse to process payments for remittance companies or impose unreasonable costs or restrictions due to regulatory requirements to prevent money laundering and other criminal activity.

These policies impact legitimate companies like SureRemit as well, which is another reason Samuel-Biyi and his team found it appealing to transact in the blockchain ecosystem.

Donating to Charity is Quick and Easy

Because of its transparent and immutable nature, blockchain technology has been responsible for shifts in a wide range of industries since its introduction a decade ago. And that’s exactly why it’s great for donating to charities.

“By minimizing administrative costs through automation, providing more accountability through traceable giving milestones, and allowing donors to see more clearly where their funds are going, blockchain may help restore some of the lost credibility to charities that prove worthy of the public’s trust,” according to a Forbes article.

Generally, people who want to make donations to support certain causes have to go through a person or website that claims to represent a particular charity or cause. The donor oftentimes does not really know if their money actually made it to the end cause, or how much of their donation may have been deducted along the way by intermediaries.

By using SureRemit’s donation functionality, donors can be certain their funds are going directly to the cause they wish to support because the transaction is logged on the public blockchain.

“In addition to solving existing problems, blockchain solutions can enable charities and non-profits to deliver results in entirely novel ways that would be impossible without the blockchain,” according to the Forbes article.

And donating through the SureRemit app is a breeze.

“On the home screen, click ‘Donate’. Select the country and charity. Enter the amount you want to donate, finalize payment, review the summary, and complete the donation,” according to the company. “That’s it, you’re done! The donation is sent immediately to the cause.”

SureRemit is looking to add more charities to its network in the near future.

With SureRemit, sending financial support back home has never been easier or cheaper. And for those receiving the support, no more waiting in long lines, dealing with bank transfer delays, and even personal safety issues that come with traditional remittance methods.