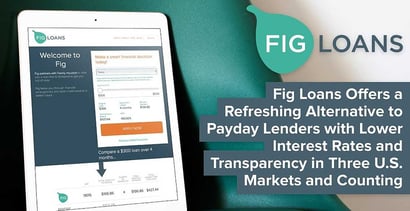 In a Nutshell: With payday lenders charging up to 400% APR or more, millions of American consumers get stuck in a cycle of repeated borrowing. But two Wharton Business School graduates set out to change this pattern by creating Fig Loans, a different type of short-term lender for low-income consumers. Fig offers lower interest loans that can be paid off faster than most others on the market and also helps borrowers build credit. These socially responsible loans can help consumers break the cycle of revolving payday loans that serve as permanent debt anchors to so many borrowers.

If it seems like there’s a payday lender on every corner, that feeling may not be too far off. According to a study by the Consumer Financial Protection Bureau (CFPB), there are more payday lenders than McDonald’s restaurants in the United States.

The reason for the prevalence of payday lenders and why they outnumber locations of America’s largest fast-food chain is simple, according to the CFPB report — they’re more profitable. Pew Research also studied the short-term and payday lending markets extensively and found that 12 million Americans turn to payday lenders each year — and pay $9 billion in loan fees in the process.

It was the realization that so many Americans relied on short-term lenders — charging 400% APR or more — that led two Wharton Business School post-grads to take a closer look. John Li and Jeffery Zhou met while researching on low-income consumers, and they started asking themselves questions like: How are these loans legal? And, why are people taking them out?

The two began formulating an idea for a new short-term loan model; one that focused on financially responsible lending for subprime borrowers. The pair founded Fig Loans in 2015 with the stated mission to provide affordable financial products that help low-income American families meet their current needs and secure their financial futures.

“We all came from traditional finance backgrounds,” said Zara Mohidin, Head of Strategy and Business Development at Fig. “So, knowing, as we did, that the Fed’s interest rate is at 2%, yet the poorest of the poor are being charged up to 600%, really was a wake-up call for all of us.”

After researching nonprofit organizations with which to partner, the Fig founders chose United Way of Greater Houston to begin testing their lending model. There, the company began to understand how and why low-income consumers take out payday loans, and the impact they have on not only individuals but also on communities.

From the beginning, the small team at Fig set out to make a difference in people’s lives. Working with nonprofit organizations, like United Way of Greater Houston and others, helped the team identify where the needs were greatest, and offer a different option. It’s this socially responsible approach that helped Fig earn its Certified B Corp status.

Certified B Corporations are businesses committed to building an inclusive and sustainable economy that works for everyone. They are required to consider the impact of their decisions on their workers, customers, suppliers, community, and the environment. More than 2,600 companies in 60 countries have signed on to this socially sustainable business philosophy.

The Fig Loans team set out to treat consumers fairly, as evidenced by the company’s status as a Certified B Corp.

When the founders of Fig first reached out to United Way of Greater Houston, they explained that they wanted to learn more about the root causes of the payday lending problem and fine-tune their business model to address it. Their contact at the organization responded by telling them Houston is payday lending ground-zero and said they needed help.

“As soon as we got to Houston and met with some of the nonprofit groups focused on financial health, it was eye-opening,” said Mohidin, who was the second employee hired at Fig. “We quickly concluded that the only way to put predatory payday lenders out of business was to serve the needs of this population at a much cheaper rate and with better service.”

The resulting product was the original Fig installment loan, which provides $300 to $750 in funds to meet unexpected expenses. Loan terms range from four to six months but can be extended without any additional interest or fees.

As someone who’s been around since the beginning, Mohidin said she remembers the immediate impact the company had on the community. She related the story of an early borrower who worked for another nonprofit organization. Along with her husband, who was also working, she was stable but not climbing the economic ladder.

To improve her opportunities, and provide more for her kids, the woman decided to make a career change and apply for a role that required an occupational driver’s license. However, the cost of this type of license ranged from $1,000 to $5,000. She saved her money but still needed a loan to secure the license and apply for the position.

The woman had sworn off credit cards because she’d had a bad experience, and her husband also had no credit card. So she came to Fig and showed her bank statements. She went through the qualification process, and the company gave her a $500 loan, which she repaid in the four months she agreed to.

As a result, she got her occupational license and landed the new job. Fig then worked with her to help build her credit. After her score improved, she qualified for a low-interest car loan because of her credit history with Fig.

At first glance, the APR charged by Fig may seem high, but when compared to payday lenders, the terms are far more reasonable.

Fig products can help consumers build credit, and its loans are designed to encourage successful repayment.

“When we first started lending we were charging just 36% and giving out loans to anyone who needed it,” Mohidin said. “But what we found is that if we wanted to continue serving people and be a sustainable business, we couldn’t continue to charge such a low rate.”

Even at an example APR of 190%, the company figures its first loan to someone is actually at break-even. Because Fig doesn’t use credit scores, and because it underwrites solely on bank statements and income-to-debt levels, it carries more risk. Fortunately, technology and more streamlined processes allow Fig to remain sustainable at the APR it charges today.

Since introducing its original Fig installment loan, the company has expanded to offer other products, including its Credit Builder accounts. These accounts act as hybrid loan and savings accounts, in which deposits are made into an escrow account on behalf of the consumer. The consumer then makes payments just as he or she would on a loan. The payments are reported to the three major credit reporting agencies — as are all Fig loans — and, at the end of the term, the customer has both a credit history and accumulated savings.

Fig began as a way to help consumers avoid the cycle of high-interest payday loans and has grown to also offer an effective way to help those borrowers build their credit. It accomplishes this through compassion for consumers and technology that modernizes — and democratizes — its processes.

Since its early days, Fig has developed a range of underwriting tools that help the company analyze risk and avoid fraud. These tools have led to the creation of the company’s third offering — Fig36. The idea behind this endeavor is to share the lending software they have developed with partner organizations, providing a turnkey lending-as-a-service platform for them to use.

“We give our software out to churches or any organization that wants to operate their own lending program,” said Mohidin. “We give them access to our technology so they can serve the people that they see are having problems with payday lenders.”

“We hope to continue to serve people in the most effective way possible and offer the lowest cost loans we can. In doing so, we strive to become the premier financial institution for lower-income Americans.” — Zara Mohidin, Head of Strategy and Business Development at Fig

This sort of technology sharing is rare in most industries, but especially so in the highly competitive lending landscape. It’s just another way the folks at Fig show their commitment to socially responsible lending.

Fig currently operates in Texas, Missouri, and Illinois. Plans are underway to open in Ohio by mid-2019, with Florida following closely after. The company hopes to enter the California market by late 2019 and to continue its expansion across the country.

“We hope to continue to serve people in the most effective way possible and offer the lowest cost loans we can,” Mohidin said. “In doing so, we strive to become the premier financial institution for lower-income Americans.”