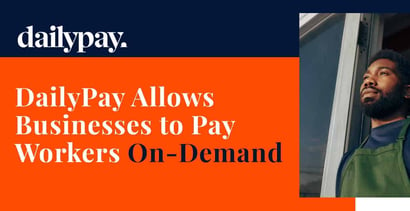 In a Nutshell: Many people living paycheck to paycheck in the United States turn to payday loans or overdraft their bank accounts when facing financial emergencies. DailyPay, an on-demand pay provider, seeks to eliminate those less-than-ideal solutions and bring more flexibility to workers. The company connects with businesses to provide workers access to earned income in between paychecks, a benefit that also helps attract and retain employees. In addition to its payment features, tools including DailyPay Balance and SAVE help employees take control of their finances.

Calhoun Management operates 90 Wendy’s restaurants in Georgia and North Carolina that employ more than 3,000 workers. The organization was interested in deploying an on-demand payment service after it saw other restaurants adopting the strategy to benefit workers. On-demand payments provide employees with access to their wages as they earn them, rather than employees having to wait until payday.

But Calhoun struggled to find an on-demand pay company that met the company’s needs. For example, some solutions did not allow everyone at the company to take advantage of the program.

“We couldn’t have salaried people on the program or anyone with deductions, and those who did enroll had to use the provider’s pay card. We had actually considered transferring everyone to that card once we were up and running, but that provider proved to be a nightmare,” said Sandi Shaw, HR Director for Calhoun Management.

The company chose DailyPay, used by seven out of 10 of the top fast food restaurant chains. The partnership was an ideal solution for Calhoun Management. Sandi, for one, said she appreciated that no one had to use a card to receive their payment.

“Everything is available on the employee’s profile. With our previous provider, we had to download a report and sort it out to see what ‘offers’ employees took. It was tedious and time-consuming,” Sandi said.

DailyPay also manages payroll processes; all Calhoun needs to do is educate its employees on how the program works. The platform launched in 2016 with the goal of helping employees avoid payday loans and overdrafts.

“We felt that the way that money moves through the financial system in the United States for both the employee and the employer was outdated,” said Jeanniey Walden, DailyPay’s CMO.

Approximately 40% of employees have since enrolled in Calhoun Management’s program, and the company has also experienced a near 30% decrease in turnover among enrollees.

“We are so happy with DailyPay. I have account reps who know me and I know them. They are like coworkers. I have never met anyone who isn’t top-notch at DailyPay,” Sandi said.

While on-demand options existed before DailyPay for industries that varied from transportation to food delivery, nothing quite like DailyPay existed in the payday sector. Most employees still had to wait for two weeks to receive a paycheck.

The first of those, time management, includes how many hours employees have worked, if they are hourly or salaried, and how many differentials, including overtime, double-time, and night shifts, they accrue.

Then, DailyPay considers the benefits system, and how much needs to be withheld for health care, dental, 401k, and other programs. The final piece is each employee’s rate of pay.

“In many companies, there are three different providers of the systems, though some use them all holistically. But it makes it a challenge to just gather the information,” Walden said.

When users opt into DailyPay, they decide whether they want to receive pay in real time or by the next day when it is electronically transferred from the employer. Real time access does have an associated cost that employers can subsidize or cover completely.

DailyPay also recently introduced a no-fee instant payment option called Friday that gives users access to on-demand transfers onto a general purpose reloadable (GPR) card. Workers receive a Friday by DailyPay™ Visa® Prepaid Card to use for purchases or at more than 55,000 ATMs around the country.

Users can also add the card to their mobile wallets for digital transactions (in stores and online), as well as use tools in the app to monitor payments and spending.

“Friday exemplifies DailyPay’s continued focus on delivering modern pay strategies that improve the lives of our users,” said Kevin Coop, CEO of DailyPay in a statement. “With Friday, DailyPay users have more flexibility and control over their financial futures than ever before.”

Providing Benefits for Employees and Employers

In addition to being able to access paychecks immediately after they earn money, employees also enjoy other DailyPay features and benefits.

One of the most significant is DailyPay Balance, which tracks how much employees earn between paychecks.

When the company started researching the need for on-demand pay, the team realized employees were often unable to view how much money they had earned before payday. DailyPay Balance meets that need.

“No one knew exactly how much their paycheck was going to be. You generally knew you were going to make about $500 to $1,000. But Balance is helpful if you’re in an hourly role that has shift differentials over time. Or if you have two jobs,” Walden told us.

With DailyPay Balance, workers get a sense of their financial earnings, which may also help them make better decisions. When they log onto the DailyPay app, they can see how much they have earned and how many days are left until their regular payday.

“It helps people make smarter decisions. Can I afford to purchase this? Do I need to add another shift? By itself, it has had a positive impact in reducing the need for payday loans, because you can finally see what you have,” said Walden.

Another benefit of seeing a pre-payday balance is the option to quickly transfer funds in a pinch. For example, if a DailyPay user needs money to buy groceries or supplies right away, they can always use the immediate transfer option which comes with a reasonable fee. This alternative is far less expensive than a payday loan or an overdraft fee.

Another attractive free service for employees is DailyPay SAVE. This feature lets users automatically move a portion of every paycheck to a savings account before they access the funds.

DailyPay: A Recruiting Tool for Companies

The SAVE feature, alongside many other benefits, makes DailyPay a popular tool that can help employers attract talent. And DailyPay gains its new clients primarily by word of mouth.

Those professionals often recommend DailyPay, especially when companies need ways to hire new employees. Among the industries that have adopted DailyPay in large numbers are the home healthcare and fast food industries.

DailyPay has also grown its profile through users who used it in their prior jobs. More than 65% of people who have used DailyPay seek it out when searching for new jobs.

“They’re choosing to move to a company that also offers DailyPay. For those that don’t, it’s usually one of the first questions that they ask: ‘Do you have DailyPay?’ So, we love those, and we welcome those calls,” Walden said.

The DailyPay team appreciates how its service and tools can help workers make smarter financial decisions. Particularly impactful is how users adopt SAVE once they gain a better understanding of their earning and spending habits.

“We love watching people go from using the real-time pay because they’re in a bind to moving to the next-day pay to avoid the fee. Then, they move into savings so that they can build up that safety net. And that’s great,” Walden told us.

How the Financial Ombudsman Service Provides an Objective View