“Cut Your Grocery Bill in Half”: A Must-Read for People in Debt 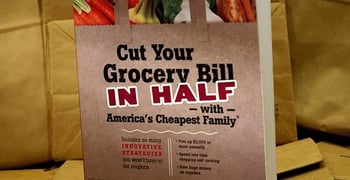 In a nutshell: “Cut Your Grocery Bill in Half” is the definitive guide on how to save at the grocery store and streamline your meals at home so you’ll have more money to put toward debt and other financial priorities.

The average family of four spends anywhere from $584 to $1,156 a month to put food on the table, according to estimates by the U.S. Department of Agriculture.

The USDA obviously hasn’t heard of Steve and Annette Economides, the husband and wife duo behind Money Smart Family and the critically-acclaimed book “Cut Your Grocery Bill in Half.”

Self-described as “America’s cheapest family,” the Economides are a family of seven who make it their goal to find new and creative ways to help everyday Americans save money.

The tips throughout “Cut Your Grocery Bill in Half” are so thorough that the Economides predict the average family will save $3,000 to $4,800 a year — money that’ll do a lot more good paying off debt.

They’re so good at saving at the store, the Economides put the USDA estimates to shame. According to Steve, his family of seven only spends $350 a month on food.

“We did things differently,” he said. “We determined teaching families to save on groceries was one of the quickest ways they could turn their finances around. If you spend $200 per person per month and we could show you how to spend $100 … for a family of four, that’s $4,800 a year. You could do a lot with that money.”

Annette compared the skills in the book to maintaining a family language.

“They say a native tongue could be lost in three generations… The people who lived through the Great Depression and World War II, they had to cook their meals,” she said. “So if their children didn’t cook as much, then their grandchildren certainly aren’t going to cook as much and may not even know how to cook…. We’re not saying cooking is the only way to save money, but it will surely help.”

Although more than 300 pages in length, you can break down the Economides’ grocery-saving tips into six essential concepts:

Realizing some techniques are more difficult than others, the Economides offer tips for various experience levels at the end of each section.

Readers can either be a “timid mouse,” trying to be frugal for the first time, a “wise owl,” for those who already have money-saving experience, or an “amazing ant,” for those who are ready to make those big changes in spending habits.

Annette recommends newcomers keep the book someplace everyone will visit at least once a day.

“Everybody has to go to the bathroom,” she said. “Keep the book in the bathroom, read a section of it and just do that! How do you eat an elephant? One bite at a time.”

The book also features a variety of worksheets and planning materials, such as a weekly menu planner, shopping list, price tracking sheet and more.

The Economides also include details from their own grocery store adventures, such as the typical inventory of their pantry, detailed food-freezing guides and even a comparison of the most cost-effective liquid dish soaps.

Applications Beyond the Kitchen

Although much of the book focuses on tips to cut back food consumption costs, the Economides believe “Cut Your Grocery Bill in Half” can help people in other aspects of life.

“The more [the readers] plan, the more money they’ll save,” Steve said. “When somebody starts planning in the grocery area and they see success, they’ll start taking that same principal and start applying it to managing their money.”

“When somebody starts planning in the grocery area and they see success, they’ll start taking that same principal and start applying it to managing their money.”

If you follow us here at BadCredit.org, you know the critical role planning has in the debt resolution process. Books like “Cut Your Grocery Bill in Half” lay the foundation for people looking to change how they handle their finances, giving them the tools to simultaneously free up money and organize priorities in their lives.

By following through with the Economides’ tips, readers are “basically learning a skill that’s transferable to every area of life,” Steve said.

“Cut Your Grocery Bill in Half” is available via Amazon.com and the iTunes Store.

Want to get the most bang for your buck while shopping? Consider opening a new credit card with excellent rewards.

How Bad Credit Can Affect Your Children’s Lives

Who Pays Off Your Debt When You Pass Away?