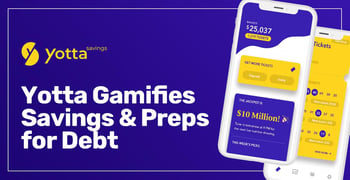 In a Nutshell: Establishing and building a savings fund is an important part of any financial plan. Unfortunately, many U.S. residents don’t see this as a realistic option as they struggle with debt and live paycheck to paycheck. But Yotta gamifies saving money with its lottery-like system that pays off no matter what. While the average interest rate on a U.S. savings account is 0.01%, Yotta users enjoy a 0.20% interest rate. And for every $25 deposit, Yotta account holders earn a recurring weekly entry into a drawing for up to $10 million. One number is drawn each night of the week for a total of seven numbers. The company also maintains high safety standards and prioritizes the satisfaction of its customers.

One of the building blocks of financial security is maintaining a savings account. Not only can having a savings fund make it easier to plan for vacations, holiday expenses, and even retirement, but it can also come in handy when emergencies arise.

Unfortunately, studies show that about 40% of U.S. residents would not be able to come up with $400 in the face of an unexpected expense without going into debt. For many of these people, paychecks go into checking (if they have a bank account), and the funds seem to flow out just as quickly as they went in.

Debt is always just around the corner.

When people are living paycheck to paycheck, stashing money into a savings account isn’t exactly a high priority for many. Especially when there are mouths to feed and bills to pay that can’t wait.

And let’s face it — saving isn’t exactly exciting. Most savings accounts can’t promise the kind of returns possible in the stock market. And they certainly can’t match the thrill of playing — or winning — the lottery.

That is, until now.

Yotta is a company working to help people learn to save (and save more) with competitive interest rates and a lottery-like prize system.

We recently spoke with Adam Moelis, Co-Founder and CEO of Yotta, to learn more about the platform, including how Yotta users can win up to $10 million by saving in an FDIC-insured account.

Moelis said he has always been interested in both behavioral psychology and personal finance. And when a friend moved to the UK several years ago, he told Moelis about the country’s Premium Bond program.

The program, which has been running since 1956, works similar to a lottery except people purchase Premium Bonds, and the bond interest goes to pay out prize winners in a monthly drawing.

“I had never heard of anything like this before, in the U.S. or anywhere,” Moelis said. “I thought it was a really, really interesting idea. I always knew that almost half of Americans have hardly anything in terms of savings, but at the same time the lottery is a massive industry where people spend over $80 billion a year.”

Adam Moelis is the Co-Founder and CEO of Yotta.

He said that many people who play the lottery in the U.S. are the same people who do not have emergency savings.

“There’s a correlation there,” Moelis said. People who are struggling the most with debt, or with finances, in general, are more likely to look for a quick fix.

Moelis set to work on researching the UK’s Premium Bonds program and also studied similar programs in New Zealand and South Africa. Moelis said he wanted to figure out how to bring this idea to the U.S. Until 2015, it was actually illegal to run a program like this in the U.S., he said, with the exception of a legal loophole that allowed some credit unions to do so.

“There was a lot of research out of academia that showed that it really helps people save money, and the people who needed to save money — the financially vulnerable — saved more,” Moelis said.

This academic research helped legalize the concept in the U.S. and gave companies like Yotta a chance to be a positive force in society and in people’s financial lives.

“So if the lottery is such a sub-optimal financial decision and saving is so important, why do people undersave and overspend on the lottery? Because saving is boring,” according to Yotta. “There’s no short-term reward. On the other hand, the lottery provides immediate hope, excitement, and fun.”

Yotta offers a solution to this problem by making saving fun while offering a better economic value than that offered with most U.S. savings accounts.

The average savings account interest rate in the U.S. is 0.01% but Yotta’s interest rate is 0.20% — a substantial difference in return rates.
‍
“With Yotta, you get the chance to win big just by saving,” according to Yotta. “So even in weeks where you don’t win a prize, your money still grows, instead of disappearing like in the lottery.”

Basically, for every $25 saved in a Yotta account, the account holder receives a recurring ticket into weekly number draws. If a customer deposits $50 they will get two tickets every week without having to make new deposits.

Yotta clients can also withdraw their funds at any time up to six times per month.

Every Monday, Yotta customers pick seven numbers for each of their tickets (if the numbers aren’t selected, they will be automatically generated for the ticket holder).

Contests are held weekly with one number drawn every night at 9 p.m., and, on Sunday, the seventh and final number is drawn and the weekly winnings are determined.

Of course, the more numbers you match the more money you win. If you match all seven numbers, you win the $10 million jackpot — not a bad way to save.

“We try to make it fun by drawing the suspense out throughout the week,” Moelis said. “At some point we’ll likely do some type of live events with the number being revealed. Right now, it’s a pretty simple animation.”

Moelis said that Yotta is able to provide its above-average interest rate and cash prizes by partnering with certain banks that offer better rates of their own.

“We pool together a portion of the interest from high value banks and offer it via prizes through weekly number draws,” according to the company. “We also take a portion and pay it to you no matter what. It’s a win-win.”

Any time a company deals with personal finances, consumers are right to be curious about the company’s security practices and other businesses they partner with. Moelis said Yotta users can feel secure that their funds and information are safe.

“It can be a challenge for consumers who are new to fintech companies,” he said. “We try to be very transparent with our users to explain how things work, who our partners are. One the prize side, who our partner banks, insurance partners, and technology partners are.”

Moelis said customers can easily do an internet search to discover more information about Yotta’s partners and confirm that they are legitimate, trustworthy companies as well.

Security is the company’s number one priority, according to the Yotta website.

Yotta gamifies saving by entering customers to win up to $10 million.

“Deposits are FDIC insured by the U.S. government up to $250,000 and held at Evolve Bank & Trust. This means that no matter what happens, the cash in your account (up to $250,000) is guaranteed safe,” according to the company.

Yotta also uses military-grade 256-bit AES encryption, access control, and secure processes to ensure funds are safe within the platform. And information is securely transmitted using SSL. Further, Yotta does not store any sensitive information on its servers.

Yotta also prioritizes the customer experience, and this is reflected in users’ online reviews.

“Never knew saving money could be so easy and even fun! I look forward to the number draws each night,” writes NestoLobo in an App Store review.

“Would 100% recommend for anyone. Fast and easy way for you to save money. There is no reason not to do this! Save and win! Absolutely worth doing,” writes Vladymyr in a Google Play review.

“You can’t lose. It’s not the lottery,” he said. “Our grand prize is $10 million as opposed to $500 million in Powerball, but the difference is that you can’t lose here.”

Yotta has built a solid foundation with its gamified approach to savings that helps keep users out of debt, and Moelis said the company intends to expand its offerings to encompaass a range of financial tools for the modern consumer.

This includes all the basic features one would expect from online banking these days, including checking accounts, debit cards, and credit cards.

“On the product side, we’re focused on making the experience as fun and as social as possible,” Moelis said.

Gumdrop Lets You Shop, Save, and Donate from Any Browser