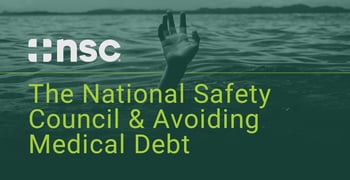 In a Nutshell: The National Safety Council works to prevent workplace injuries and death, efforts that help workers avoid costly medical bills that could send household budgets into a downward spiral. About 40% of U.S. residents cannot cover an unplanned cost of $400 without going into debt. The nonprofit was founded more than 100 years ago following the Triangle Shirtwaist Factory fire in New York City that caused the death of 145 because of unsafe working conditions. Since that time, the NSC has remained focused on its mission to look out for the safety of America’s workers. The organization has also developed a trove of resources for companies to help them navigate the COVID-19 pandemic.

Like so many Americans, in my downtime, I sometimes scroll absentmindedly through social media posts to keep up with old friends and occasionally discover some interesting news — and yes, watch silly videos.

But these days it’s not uncommon to see friends and acquaintances posting fundraising campaigns on behalf of someone with medical debt. Unexpected medical debt can send a budget spiraling downward in a heartbeat. Even the insured can incur hefty medical bills when it comes to testing, surgeries, and other procedures.

In fact, about 40% of people surveyed by the Federal Reserve Board in 2018 reported that they would not be able to cover an unexpected cost of $400 without going into debt. Of course, taking on significant debt can lead to increased stress levels — which takes a mental and physical toll on the body — and even substance abuse.

Thankfully, organizations such as the National Safety Council (NSC) helps U.S. residents stay safe in their jobs and avoid workplace accidents that can lead to debt and hardships.

And with the ongoing COVID-19 pandemic, workplaces are being presented with new challenges, including how to work safely from home and keep the workplace safe from the virus.

Kim Shambrook, Vice President of Workplace Practice at NSC, spoke with us recently about the organization’s history, its mission to help people avoid injury and death, and its response to COVID-19.

“The National Safety Council has been around for over a century,” Shambrook said. “And, interestingly enough, the council was born out of a tragic fire that occurred in New York called the Triangle Shirtwaist Factory fire.”

The 1911 fire broke out in what would today be called a sweatshop, owned by the Triangle Shirtwaist Company. The fire swept across the top three floors of the Asch Building in Greenwich Village.

At the time of the fire, the top three floors where the employees worked only had one functioning elevator, one accessible staircase, and a fire escape that was too narrow to be useful. Additionally, far too many employees — about 600 — were working in cramped conditions.

The fire is believed to have started in a rag bin. The whole incident lasted only 18 minutes, but, because there were no safety protocols in place, the fire resulted in the deaths of 145 workers — most of whom were girls and women aged 14 to 23.

“The tragedy brought widespread attention to the dangerous sweatshop conditions of factories, and led to the development of a series of laws and regulations that better protected the safety of workers,” according to History.com.

Shambrook said another part of the response was that the community called for a coalition to address workplace fatalities.

“Over the past century, through the combined efforts of the safety movement, great progress has been made in addressing hazards by implementing better design, working conditions, and accountability,” according to the NSC website. “As a result, we are better able to protect our most important assets: people and the planet.”

Shambrook said that since its inception, the National Safety Council has remained focused on its mission of eliminating preventable causes of injury and death.

“What most people consider accidents tend to be things that can be elevated, and quite frankly, turned into a fatality,” she explained. “So, our work has been centered on that.”

As with the Triangle Shirtwaist Factory fire that led to the establishment of the NSC, people tend to not recognize the risks in their lives until something bad actually happens.

The NSC offers a wide variety of resources, including safety training and certification, to help prevent injury and death in the workplace.

“Then, suddenly it’s like ‘Oh my gosh, we need to change this,’ or ‘I have to be more attentive to that,’” Shambrook said. “Our job is to help folks recognize that there are risks, but you can avoid those, and you can be safe.”

The nonprofit organization does this through an array of products, services, and educational resources for its 16,000 member companies.

“Our membership base is predominantly the small to mid-size company,” Shambrook said. “Maybe they don’t have the infrastructure in place to have the resources around safety that larger companies have. So we help them with everything from safety posters to safety talks.”

The organization also offers safety assessments and provides a wide variety of safety training options for various types of workers and employers.

“NSC starts at work — where people put everyday strategies in place to solve problems. We give companies resources workers can actually use around risks they are actually facing, or will be,” according to the NSC website. “We create a culture of safety to not only make people safer at work but also because it has the potential to make people safer beyond the workplace.”

Shambrook said that, in addition to Workplace Practice — which is the largest division — the nonprofit also maintains a Roadway Practice and an Impairment Practice.

Responding to the COVID-19 Pandemic

The COVID-19 pandemic has turned the American workplace upside down in many ways.

“I would be remiss if I didn’t say that in the past 100 years, there probably hasn’t been a time like now where safety is so central to everything in our everyday lives,” Shambrook said.

Shambrook said she was having a conversation with some friends in February when the topic of safety came up.

“I mentioned the acronym PPE (personal protective equipment), and their response was ‘What is this PPE? I have no idea what that is.’ So I told them,” she said. “Now, five months later, kindergarten kids know what PPE is. It’s amazing, the bright light of late that’s been shown on safety and what that means.”

The pandemic has brought up all kinds of conversations around safety, not just in the workplace but in the home as well.

And the NSC has been doing its part to address safety issues during these challenging times.

“We were able to create a coalition where we brought together close to 100 companies, associations, and organizations to create what we call SAFER, which stands for Safe Action For Employee Returns,” Shambrook said.

The members of the coalition shared their safety protocols, playbooks, and best practices, she explained.

“And we basically launched research around that, aggregated all of it and published a series of frameworks and playbooks that companies could then use for free,” Shambrook said.

The NSC also developed 15 different products that companies could take advantage of, she said, including workshops and training focused on COVID-related issues and the workplace.

Another part of the SAFER initiative includes providing access to the SAFER Business Solutions directory, which compiles information on companies that offer products like PPE, testing, software, and other equipment related to the pandemic, Shambrook said.

“This has been a big, cross-organizational initiative for the NSC. We have a core team of people and a taskforce that meets every two weeks,” she said. “We bring in representatives from places like NIOSH (National Institute for Occupational Safety and Health) at the CDC to talk about the big issues we’re facing and what comes next.”

Shambrook encourages people to explore the National Safety Council’s website for the organization’s full range of products and services — both for everyday safety and COVID-related resources.