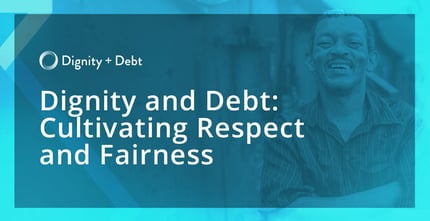 In a Nutshell: Dignity and Debt is an initiative whose goal is to return dignity and humanity to financial services, particularly for those in debt. The project is the result of a collaboration between Princeton University, the Social Science Research Council, VizE Lab, and a number of other partners. The project undertakes research across a dozen countries to understand and empower the connections between lending and human values. the program is currently focused on researching how debts are being collected, the student debt crisis, and the unnecessary suffering that debt can bring. These are quiet crises sometimes suffered in shame.

I think it’s safe to say that nobody enjoys being in debt. But it’s simply a fact of life for millions around the world. Of course, there are different kinds of debt. Automobile payments, mortgages, and a reasonable amount of credit card debt are pretty much accepted as a necessary cost for many.

Then, there’s the other kind of debt, where the amount owed has become unmanageable and the person is falling behind each month, collections agencies are calling, and a feeling of hopelessness sets in.

The Dignity and Debt project is focused on solving this common problem using research, analytics, and expertise to create financial solutions that will restore humanity to finance and allow people to be treated with the respect they deserve. The project is the result of a collaboration between the Social Science Research Council, Princeton University, and VizE Lab.

To learn how the program came about, we e spoke with Frederick Wherry, Founder and Principal Investigator at Dignity and Debt and Class of 1917 Professor of Sociology at Princeton University. Wherry also offers insight into how the program seeks to help people regain their dignity through research and financial solutions.

“Loans enable people to realize their visions of a good life, yet many families across the globe are falling into life-altering debt,” according to Dignity and Debt. “Worried that they will forever be enslaved by it, some parents have trouble sleeping and their health and relationships diminish.”

Wherry conceived the idea for the Dignity and Debt project when he identified common problems in several projects he was involved in. These lessons came not just from the U.S. but from Kenya, Argentina, and Brazil.

Wherry found that people in low socioeconomic brackets were being further marginalized, either by financial institutions or the financial products they were given access to.

People wanted access to credit and debt, he said, because it represented their inclusion or sameness with everyone else. Wherry said it was a way for someone to signal that they are a grown-up and live the way grown-ups live.

“The other thing that became apparent was that they were sometimes willing to pay a really steep price in order to keep their chin up,” Wherry said.

This means people who had some level of financial education and understood the stakes of the loans were taking out high-cost loans.

“They basically said, I am a parent, I have obligations to my children, I have to worry about my parents as well,” he said. “So, there was a sense of, ‘How do you live with dignity at nearly all cost?’ It became pretty apparent that people were paying a price for dignity.”

Wherry discussed another way dignity plays into the financial narrative as well.

“The other thing I started to see just by virtue of looking at complaint narratives and the Consumer Financial Protection Bureau’s database was what happens when people are behind on their payments and the things they complain about,” he said.

He said a lot of people feel their right to dignity ends in the moment they fall behind in their payments.

“There was a consensus among the debtors writing into the CFPB that ‘you don’t talk to another grown-up like that,’” Wherry said. “One woman was very embarrassed because she was cursed out in front of her daughter, and the daughter cried. Here she is being referred to as a loser and denigrated as if a piece of trash. No parent wants their child to see something like that.”

Despite the situation, and whatever consequences someone is facing because of debt, Wherry said that each person should be treated as a human being.

After observing the challenges people face when it comes to maintaining dignity in the face of debt, Wherry launched the Dignity and Debt initiative. The program consists of a network of partners across a dozen countries developing data-rich analyses and innovative financial services for low and moderate income households.

“Rather than using stories and texts as anecdotes, the network combines both richly-detailed case studies and experiments and computational analysis of large bodies of texts to assess the meanings and values that affect financial capability and well-being,” according to the organization.

“Our first objective is to ask whether a business case can be made for using respect to improve customer experience and to reduce the cost of loan defaults?” according to the project website. “Does the inclusion of respect decrease the cost of debt collection while increasing consumer financial well-being?”

Because debt collection is a key site where the indignities are occurring, Wherry launched a new Debt Collection Lab where they are tracking which debt collectors are taking people to court, where it is happening, and where there are disparities by race and income in the neighborhoods being targeted. The Lab is also using different arts and storytelling traditions to change the narrative about debt justice.

“Debt collection is one of those quiet crises — a lot of people are experiencing debt collection. Nearly 1 out of 3 Americans have had debt turned over to collections,” he said. “But it’s not as if you see something really dramatic happening when someone is taken to court over their debt. Most of the time they don’t show up for the court date and find themselves owing fines and fees more than the debt itself, in some cases. No one sees it, so debt collection’s kind of this invisible, quiet crisis.”

Building a Strong Network of Partners to Carry Out Innovative Projects

To achieve its objectives, the Dignity and Debt project is supported by a strong partner network and made possible by several key organizations, including the Social Science Research Council, Princeton University, the Princeton Institute for International and Regional Studies, and the VizE Lab. For their initial exploration into consumer complaints in Brazil and Kenya (unpublished), they benefited from support from the Mastercard Center for Inclusive Growth.

Wherry discussed how a strong network is essential for Dignity and Debt to succeed as well as some of the projects the organization is currently working on.

“Princeton has a science fund to sort of help jump-start these initiatives,” Wherry said. “And what the initiative looks like right now is, we have one initiative on student debt, and we have another initiative on debt collections, and we continue to expand our conversations with partners engaged in experimentation on how to re-shape payment and debt arrangements so that people can pay what they owe while maintaining a sense of self worth.”

The student debt initiative includes the launch of a new initiative at the University of California at Merced called the Higher Education Race and the Economy (HERE) Lab in partnership with Princeton. The initiative grew out of the Network’s 2019 conference, “Digging out with Dignity,” at Princeton University. The HERE Lab is studying predatory online colleges, how students and parents engage with financial aid applications (FAFSA), and how historically excluded groups might better navigate debt and opportunity.

“We offer means to broaden the conversation about the impact of student debt and imagine solutions for the student debt crisis and for financing higher education,” according to the organization.

Wherry said one of the big successes of Dignity and Debt’s network is simply having so many different people working together to produce meaningful results.

“The network has been valuable for us being able to pull together clusters of people who aren’t usually together, and they are in a space to teach, learn, and innovate. We come together assuming that breaking things apart and reassembling them is a good way to start on the road to change,” he said. “When people in our network really see the value of innovation and understand how dignity can be a win-win proposition, they take the ball and run with it.”