Retiring with Debt: National Bureau of Economic Research Paper Illuminates a Recent Phenomenon in the Aftermath of the Great Recession 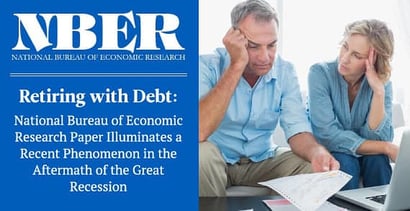 In a Nutshell: Retirement has traditionally been referred to as one’s Golden Years — a time when people can enjoy the fruits of their labor. But the trend has flipped in recent years, with more retirement-age people in debt now more than ever. Driven by a borrowing culture that fed the Great Recession, many seniors are still working themselves out of debt. A paper from the National Bureau of Economic Research examines this trend by looking at two studies of retirees. The researchers found that the oldest age group studied (those born between 1931 and 1941) were the best off financially, while worst off were the early baby boomers (those born between 1948 and 1953.) Additionally, the report found factors such as income, education, and financial literacy also played a role in senior debt levels.

The latter part of a person’s life is typically a period in which people can financially reap what they’ve sown. This trend has changed over the past decade, however. The Great Recession of 2007-2009 hit many Americans hard — especially those now among the older generations. According to the Census Bureau, people 55 to 64 and over 65 experienced the largest relative increases in household debt. Those in the former age cohort had a 64% increase in median household debt between 2000 and 2011, and median household debt more than doubled among the latter group.

The debt that both led to the recession and remained during its fallout was largely driven by borrowing behavior, according to researchers who authored a paper on senior debt for the National Bureau of Economic Research (NBER), a nonprofit, nonpartisan, Washington, DC-based think tank that has specialized in studying economic causes and effects since 1920.

In the NBER paper, “Debt and Financial Vulnerability on the Verge of Retirement,” the researchers explained that, unlike in the past, people have gained easier access to home mortgages and home equity lines of credit. Taking out mortgages also required smaller down payments, which played a role in the trend.

The researchers based their analysis on the Health and Retirement Study (HRS) to compare three elderly age groups, and the determinants and development of debt in each. They also looked at the National Financial Capability Study (NFCS) from 2012 and 2015, which provided information on debt and debt management among the elderly, as well as factors of their financial fragility.

Current Debt Per Household is at an All-Time High

Between 2000 and 2008, the years leading up to the Great Recession, total household debt in the US peaked at $12.68 trillion, as reported by the Federal Reserve Bank of New York. But by the end of 2016, debt had fallen by just 0.8%, and mortgage originations were at their highest level since the start of the recession. The elderly, defined as those 55 and above, experienced the largest relative increases in household debt.

Several factors have driven that debt. Research by Bucks et al., 2009, showed that 55% of those between age 55 and 64 have mortgage debt, and about the same percentage also have credit card debt. Of those who are slightly older (65 to 74), two-thirds have debt: half with mortgages; one-third with credit card debt; and one-quarter with installment loans.

Other research (Pottow 2012) showed that the 65-and-older population has been the fastest-growing for bankruptcy filings, with credit card interest and fees the most commonly cited reasons. Medical debt was also a factor for some people. Cumulatively, all these factors played into a trend across the group of increasing ratios, both of total debt to total income, as well as debt to liquid assets.

Expensive Homes and Smaller Down Payments Have Expanded Debt

According to the report, mortgage debt rose partly because people were purchasing more expensive homes than had their predecessors. Property values increased with each age group.

Simultaneous to the surge in home prices was a trend toward smaller down payments on those homes. Some research has found that technological change in the lending market facilitated easier borrowing for people. In addition, research shows that the proliferation of non-linear contracts and questionable sales tactics have made it harder for customers to understand what exactly they are getting into — and are therefore more likely to engage in excess borrowing.

The study found wide variation in debt and debt factors among the three age groups. The percentage of people in the baseline group (see above) who were in debt when they were on the verge of retirement was 64% compared with 71% of early boomers, the youngest cohort studied.

Early boomers also had a much higher proportion of non-mortgage debt as a percentage of their liquid assets. There was also an increase in debt-to-income ratio in the younger people, making them more vulnerable to increases in interest rates. Younger people also had a greater prevalence of very low wealth, meaning less than $25,000 in savings. As the researchers summed up, “It seems clear that over time, savings have shrunk and debt has ballooned for Americans on the verge of retirement.”

They also interpret the variance in age group wealth as follows: “The fact that indebtedness decreases as people age most likely means that debt continues to be repaid in old age. It may also indicate that older people today were more conservative about taking on debt near retirement than today’s younger generation is.”

The researchers also looked at several socio-demographic factors associated with financial vulnerability. Being unmarried, nonwhite, less educated, having a lower income, having more children, and being in poor health correlated with more vulnerability. However, singles did better than couples when they had a higher income and a college degree.

The NFCS data overlapped with many of these findings. Mortgages were again the leading cause of debt, followed by credit cards. One-third of credit cardholders had costly habits perpetuating debt such as paying the minimum amount due or using the card for cash advances.

The survey also looked at respondents’ own evaluation of their debt, as well as their capacity to deal with financial shocks. About 40% of people nearing retirement (between age 56 and 61) said they had too much debt, and 34% said they could not immediately come up with $2,000. The older groups fared better.

The researchers concluded that, while economic and financial shocks play a role in the accumulation of debt close to retirement, having resources can mitigate some of those effects, and so can financial literacy. “Our research suggests that analysts and policymakers should explore ways to enhance debt management practices as they examine factors driving retirement security.”