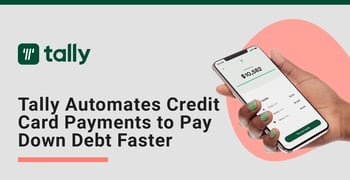 In a Nutshell: The Tally app aims to help consumers with outstanding debt strategize paying off their credit cards more efficiently. Tally users can schedule automatic payments, so they never miss a due date. It also helps create long-term payment plans so consumers with multiple credit cards can pay them off faster. The app can even work with users with a low-interest line of credit to maximize their money as they pay down debt.

Many consumers accrue a substantial amount of debt by only paying off the minimum balance on their credit cards instead of paying all or most of their balance each month.

Then, the accruing interest on those credit cards starts to add up, creating a long-term problem. Not only do balances continue to rise as consumers struggle to pay them down, but interest also accrues on those larger balances. That can lead to more challenges in paying down their debt.

Tally is an innovative app that aims to help its members break out of that cycle by paying down their debt more efficiently. According to Tally, its app can help save members up to $4,185 in payments over five years.

“Our first product was the automated debt manager. We’re the first app to tackle one of the biggest financial issues in the country — credit card debt,” said Anthony Schrauth, Tally’s VP of Product. “One of the reasons why it’s so hard to pay off credit card debt is because people end up flushing away billions of dollars each year by paying by paying unfairly high interest rates and late fees.”

The app works by automating credit payments to ensure members never miss a deadline. Tally analyzes each consumer’s credit background to create the most efficient plan, and provides a path to a debt-free future.

One of the quickest ways consumers assume greater debt — and hurt their credit scores — is by missing minimum payment deadlines on their cards. Tally can eliminate that worry by automating those payments.

But there is more to Tally’s payoff schedule than paying the monthly minimum.

“We analyze your financial profile, find the smartest and fastest way for you to pay down your debt, and take action on your behalf. We pay things down the way they should be paid down, so you don’t have to think about it,” Anthony said.

Tally factors the total balance owed and interest rates in its analysis. The app then calculates the amount the member needs to pay toward their credit card debt each month and creates a comprehensive payment plan.

For instance, if one credit card has a higher interest rate, the app will recommend paying it off before it pays off other credit cards — regardless of the total balance owed. That’s because the debt on that card will cost the member more, so it’s better to pay it off first.

Another factor that the app considers is how much of the credit limit is being used on each card.

The app also considers the psychological impact of debt. Specifically, the company now lets members decide whether they want to pay off the credit card that carries the lowest debt limit first to get it out of the way.

“That’s a test we’re running right now. Debt is not as rationalized as people believe that it is. There is a psychological component as well,” said Anthony.

To get the full benefits of sign up for Tally, members must first apply for the company’s line of credit. With this financial tool, Tally is able to consolidate a member’s debt into one payment and offer late fee protection. Many consumers with FICO credit scores of at least 580 will be approved. Then, members can link all of their credit cards to the app and start using Tally to manage their debt.

For those who don’t yet qualify for Tally’s line of credit offering, Tally provides a debt management service that still allows people to see and pay all their cards in one place, as well as set up automatic payments based on customized recommendations from Tally. This offering ultimately helps people get on a quicker path to qualifying for Tally’s line of credit and getting its additional benefits.

“When people sign up, one of the ways to get the best deal is to make sure we’re aware of all of your cards. Link them so we can optimize them for you,” Anthony said.

At that point, members can decide whether they want to upgrade their membership from the basic credit line. With the premium membership, members can get access to even lower interest rates in exchange for an upfront fee of $300 per year. This fee is rolled into the credit line, so there’s no out-of-pocket cost to members.

“All of our analysis has shown this gives people a better deal. You end up saving more than that in interest and fees by paying the annual fee,” Anthony said.

The Tally team also aims to improve financial literacy, especially on the behavioral aspects of getting out of debt. For instance, it makes sense for members to pay more than the minimum credit card balance whenever possible. The app promotes “Tally Tuesdays” to emphasize that message, encouraging members to pay an additional amount, no matter how small, to help decrease their debt.

“If you put in an extra $20 a week, you will get out of debt even faster,” said Anthony.

Tally caters to members who have multiple revolving credit card balances. The app can be a particularly appealing option for those trying to avoid bankruptcy.

Those who want to eventually qualify for home loans can benefit from using Tally. Significant credit card debt may decrease the likelihood a consumer receives a home loan, as can a history of missed credit payments.

Tally can help consumers with both of those aspects.

“That’s what a lender looks for — how much are you using your credit and if you’ve never missed a minimum payment. With Tally, you set it and forget it, all while making sure you don’t get dinged,” Anthony said.

With automation in place, Tally users can feel more confident about qualifying for home loans. Anthony said that many users have called the company’s member success team to report that they qualified after using the app for a few months to get their credit card debt in order.

“They tell us they finally feel in control of their debt. They are finally able to get this home loan they never thought was possible,” Anthony told us.

Historically, you needed at least a 660 FICO score to qualify for Tally’s line of credit. The Tally team spent the last year working to make the app even more accessible, especially to those with lower credit scores. This was in response to the anticipated growth in credit card debt. 2020 had represented the most significant drop in debt in the last 20 years. However, that was driven by people spending less early in the COVID-19 pandemic and using their stimulus checks to pay down debt.

“People are spending again at pre-pandemic levels and falling into bad habits. We help people get control of that debt. To help them do that, we are making the product more and more accessible. We are also making our automation tools available, whether or not they qualify for a line of credit,” Anthony said.