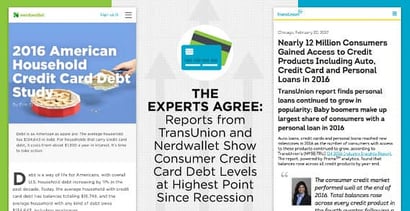 In a Nutshell: Though few would be surprised to learn credit card debt levels hit their highest point of the last 15 years during the Great Recession of the late 2000s, it may be a surprise to many that current debt levels may soon exceed even post-recession highs. Recent reports from TransUnion and Nerdwallet show consumer credit card debt at its highest point since 2009, with a 4.4% increase in the number of consumers with credit card balances, and the average indebted household owing $16,748. That debt is costing households nearly $1,300 a year in interest fees. At the same time, credit card delinquency rates also rose for the third straight year. Despite these changes, experts agree the economy is stabilizing, and the Federal Reserve is expected to raise interest rates later this year.

In the late 2000s, a number of economic pressures, including the housing bubble and resultant burst, exposed a series of cracks in the bedrock of the US economy. The fracture that resulted as those cracks intersected led to the partial collapse of, among others, the banking and housing industries. In what would come to be called the Great Recession, millions of jobs were lost and hundreds of thousands of businesses closed as the market sank. Unemployment skyrocketed into the double digits, and the average American household held $7,415 in credit card debt.

Unfortunately, those levels would turn out to be short-lived. As interest rates and spending rates return to previous levels, so too has credit card debt. Now, according to coincident findings by TransUnion’s Q4 2016 Industry Insights Report and Nerdwallet’s 2016 American Household Credit Card Debt Study, both the number of consumers carrying credit card debt and the balances they carry have hit their highest point since the Great Recession.

This TransUnion map shows the average consumer credit card balance for the US.

“The credit card business hit several milestones in the fourth quarter, as the number of consumers with a card balance rose to the highest level we’ve observed in seven years,” said Paul Siegfried, Senior Vice President and Credit Card Business Leader for TransUnion. “Driven by a strong holiday shopping season and a steep rise in consumer sentiment, total credit card balances increased 8% year-over-year and surpassed $700 billion for the first time.”

By the end of 2016, the average American household with credit card debt owed $16,748 to their issuers, just a few hundred dollars shy of the average amount owed at the peak of the Great Recession. For the 37.1% of households Nerdwallet estimated carry revolving credit card debt — and who are, thus, the ones paying interest on their balance — the cost of that debt is high.

“The average household with revolving credit card debt carried a balance of $6,885, as of June 2016, and pays $1,292 a year in interest, assuming an annual percentage rate of 18.76%,” said Erin El Issa in the Nerdwallet report on the 2016 American Household Credit Card Debt Study. That number, based on an internal Nerdwallet average of 18.76% APR, climbs even higher for those dealing with the 20%+ interest rates associated with subprime credit cards.

“What becomes a big question mark for a lot of people is, ‘How much debt is out there? Is my debt load normal?'” said Sean McQuay, NerdWallet’s Credit and Banking expert. “I think there’s a lot of shame tied to credit card debt, and so the study tries to kind of figure out what does the average load per household look like. The most important step every American can do is recognize you’re not alone — and this isn’t something you can bury your head in the sand about.”

Those higher balances may also be affecting Americans’ ability to pay their credit card bills. The TransUnion report found credit card delinquency rates rose for the third straight year. That delinquency rate increase may, in turn, be causing some issuers to reconsider their lending models.

“Card delinquencies experienced a deterioration in the fourth quarter of 2016 as lenders’ subprime portfolios matured and energy-dependent states experienced ongoing challenges,” said Paul. “However, we observed a significant slowdown of originations to subprime consumers, which could signal lenders are evaluating their risk management strategies in light of the rising delinquency rate.”

“Lenders are issuing more credit, and consumers are using that credit,” said Nidhi. “As a result of this conscious effort to relax underwriting, we have observed higher, although still well controlled, credit card and auto delinquency rates over time.”

Increased lending alone isn’t responsible for the rise in consumer credit card debt. The Nerdwallet study found cost of living increases to be another likely cause, as purchasing the basics has become more expensive — but incomes haven’t grown at the same rate.

“Many people assume that credit card debt is the result of reckless spending and think that to get out of debt, people need to stop buying designer clothes and eating at five-star restaurants. But many people use credit cards to cover necessities when their income just doesn’t cut it,” said Erin. “The rise in the cost of living has outpaced income growth over the past 13 years. Median household income has grown 28% since 2003, but expenses have outpaced it significantly. Medical costs increased by 57% and food and beverage prices by 36% in that same span,” according to the report.

While using credit cards to make ends meet can seem like a reasonable short-term option in times of need, the long-term cost can end up being high. Beyond the average $1,292 in annual interest charges, revolving credit card debt can also negatively impact your credit score, decreasing the quality of future credit. Additionally, defaulting on a credit card is not only financially costly but can have severe credit score effects.

“Taking on debt to cover the gap between income and expenses is a short-term fix with costly long-term results,” says Sean. “Instead of taking on debt, try to increase your income by finding freelance work or a part-time job you can do on the side, or cut back on expenses where you reasonably can, before adding to your credit card’s balance.”

Sean also strongly recommends each family establish a workable budget — and the keyword here is workable. He likens a good budget to a healthy diet, saying budgets aren’t about what you can’t do, but what you can. “As you budget, you’re able to set your own financial priorities and determine where you want your money to go,” said Sean. “You can actually be in control of your money. At the end of the day, the best budget is the budget you can live with, healthfully, every day.”

If projections hold true, a good budget will be a necessity for paying off credit card debt for an increasing number of Americans; Nerdwallet estimates show total credit card debt steadily growing for the foreseeable future. That said, Sean noted that the rising consumer credit card debt levels are far from a sign that the economy is headed for another recession.

“When the next recession strikes, it’s unlikely to be the result of poorly managed credit card debt,” said Sean. “By all measures, consumers are handling their debt far more responsibly than they have in years past, likely due to a combination of issuers tightening their lending rules and consumers paying their minimums more responsibly.”

So, while the cracks in the foundations of the US economy have yet to be completely repaired, the general consensus seems to be that it has generally stabilized. One result of that stability noted in the Nerdwallet report is the upcoming Federal Reserve increase in overall interest rates.

“The US Federal Reserve voted at its December meeting to increase interest rates by 0.25%, which will affect anyone who has a credit product with a variable interest rate. Because most credit cards have variable rates, that increase is expected to raise the average credit card interest from $1,292 to $1,309 per year,” according to the report.