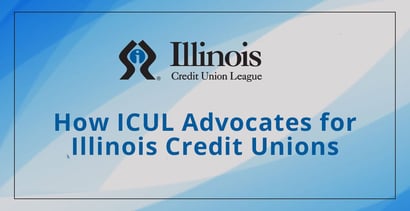 In a Nutshell: While credit unions work to serve the interests of their members, organizations like the Illinois Credit Union League work to support the credit unions themselves. With 234 credit unions spanning all sizes in Illinois, ICUL is one of the largest associations of its kind in the country. ICUL not only serves as an advocate for credit unions at the state level, but it also helps to provide important compliance guidance and financial literacy resources to its member institutions. It also helps credit unions onboard the latest technology so members can gain access to modern banking tools, including digital banking, mobile apps, and bill pay services.

The credit union movement can be traced back to the late 1800s in Germany, and it found its way to the U.S by the early 20th century. The alternative banking solution offered many appealing benefits for folks in the U.S.

As nonprofit, member-owned organizations, credit unions inherently have the interests of their members at their core. Not only are credit unions often known for next-level customer service, but they can also rival the biggest banks with competitive rates and lower fees.

The Illinois Credit Union League (ICUL) strives to make sure credit unions across the Prairie State have the tools, resources, and information necessary to continue serving their members in the best way possible.

“The league is, of course, the state credit union trade association,” said ICUL President and CEO Tom Kane. “We represent 234 credit unions in the state, and I think we rank number four or five for most number of credit unions represented in the country. So, that’s quite a few credit unions.”

We often highlight credit unions and the great work they do. But by chatting with Kane, we wanted a chance to learn more about organizations like the Illinois Credit Union League and how they work to make those credit unions effective for their members and impactful in their communities.

Kane told us about all of this and more, including how the association stepped up to assist Illinois credit unions that were navigating the COVID-19 pandemic, meeting technology challenges, and the importance of focusing on diversity, equity, and inclusion.

The Illinois Credit Union League is known as one of the nation’s most proactive and effective leagues, according to the organization.

Tom Kane is the President and CEO of the Illinois Credit Union League.

He said some of these smaller credit unions have one or even zero permanent employees, and perhaps operate out of churches and are only open one or two days a week. One credit union was even operating out of a closet at one point.

Kane said it’s just as important for these small institutions to be represented and to have a voice as it is for the larger credit unions.

“The league is 90 years old and really focused on the three things that all trade associations focus on — political advocacy, compliance, and education information,” Kane said.

Political advocacy becomes a large part of ICUL’s work, Kane said because the association has the most state-chartered credit unions in the country among its members.

Kane also discussed the importance of helping credit unions gain access to financial literacy resources for their members, citing the Federal Reserve’s survey that revealed that 40% of U.S. residents would not be able to cover an unexpected $400 expense without going into debt.

“I think that just hit people really hard in the credit union industry, and the question is what is it we can do to help people?” Kane said. “We’ve heard from our national foundation that we work closely with, as well as in our own interactions, that there’s a very close tie to health and finances and the stresses that are put on people. Financial stress leads to poor health outcomes.”

So delivering effective financial literacy resources is not only important strictly for the financial well-being of people. It can also play an important role in the physical health of consumers.

Some of these initiatives include building member and consumer financial capability by offering toolkits for product development, credit union financial counseling certification, experiential learning programs, planning and coaching, and speaking and training, according to the ICUL website.

Kane said that supporting these initiatives is crucial in the association’s role in its mission to be there for credit unions, that can then in turn support the financial well-being of their members.

Of course, 2020 was an unprecedented year for people and businesses of all kinds in the U.S. thanks to the COVID-19 pandemic, and credit unions were not exempt from the challenges faced by so many.

And some of the challenges were unique to credit unions.

“One of the criticisms of credit unions is that they can be behind the times or they don’t offer some of the digital options and mobile banking that some of the bigger banks do,” Kane said.

While it’s true that some credit unions did not jump on advances in technology as quickly as their banking counterparts, the technology gap between these institutions has been closing fast in recent years. And the pandemic only helped to speed it up.

“First of all, a lot of credit unions switched to drive-through services — they did almost all their banking through the drive-through, and even did mortgage closings in parking lots,” Kane said.

But ICUL was able to help a lot of credit unions pivot to a digital banking experience quickly and effectively.

“A lot of credit unions accelerated their digital program very, very rapidly. And talking to CEOs, oftentimes when they would roll things out in the past, they got pushback from members who were like, ‘I don’t want to use that.’ But the pandemic allowed them to be able to cut through a lot of that. — ICUL President and CEO Tom Kane

With the pandemic causing so many people to quickly shift how they live their day-to-day lives, many were more willing to try digital banking and mobile services than they had been in the past.

“That’s been, I guess, one of the silver linings to all of this is that credit unions have been able to upgrade very rapidly and provide its members with features that banks have had for a long time,” Kane said.

One example of how the Illinois Credit Union League was able to directly assist its member institutions in onboarding new technology is the work it did with a group of 10 of its faith-based credit unions. These are among the smallest credit unions in ICUL that Kane mentioned earlier.

“We were able to help them find a new core processor — a new base system for them to use,” Kane said. “That means their members will now have access to mobile banking, internet banking, bill pay, all those kinds of things that they did not have individually. We were glad to help facilitate that as much as possible.”

Focusing on Diversity, Equity, and Inclusion

Kane said that ICUL is always looking for ways to improve and help its member institutions grow and improve as well.

“The big topic since this summer after George Floyd’s death is diversity, equity, and inclusion,” he said. “That has become a very, very important part of our focus.”

He said the association created an internal committee that has been working on materials, resources, and events for credit unions that promote diversity and inclusion.

“There’s this general feeling that people want to do something, but they just don’t know what to do,” Kane said. “And I’m talking about meeting people on their journey. And credit unions, just like other businesses, are at various points along their journey toward DEI. We’re trying to do as much as possible to help.”