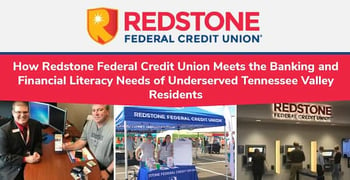 In a Nutshell: As big banks continue to raise fees and cut back on services, more Americans are turning to credit unions to manage their finances. Credit union membership has increased around the nation in recent years, topping 100 million people in 2017. Redstone Federal Credit Union, which serves communities in the Tennessee Valley from Huntsville, Alabama, to Central Tennessee, has also seen its membership increase to more than 400,000 recently. This growth can be attributed to Redstone’s innovative financial literacy and education programs and its commitment to serving the needs of its local communities, which is also why it was named the 2018 Credit Union of the Year by the NAFCU.

Since gaining widespread acceptance in the middle of the 20th century, credit unions have become an indispensable part of the American banking system. Today, more than 100 million Americans are members of a credit union, and, for many of them, these smaller community-based financial institutions are the only form of banking that’s practical or available.

Credit unions are not-for-profit institutions that exist to serve their members and communities. As such, they typically have lower fees for their products and services, higher savings interest rates, and better loan rates than traditional for-profit banks. That makes them the ideal banking choice for virtually every demographic, including members of a community who have experienced past financial missteps.

Redstone Federal Credit Union is one such member-owned institution that has served residents of the Tennessee Valley, from Northern Alabama to Central Tennessee, since 1951. Based in Huntsville, Alabama, Redstone began as a credit union for military personnel serving at US Army post Redstone Arsenal and for NASA employees at the nearby Marshall Space Flight Center.

The credit union was started with an initial deposit of $5 from each of the 11 founding members, and a five-spot is still all it takes to join Redstone today.

Redstone’s commitment to the local community is apparent in its personalized member services, and the programs and financial products it offers. The credit union’s standing was also validated recently by the National Association of Federal Credit Unions (NAFCU) when it recognized Redstone as the 2018 Credit Union of the Year.

Further proof of Redstone’s impact on the community can be seen when looking closely at its member stories, like that of Shalonda Haygood, who joined the credit union when she was just 13 years old.

Now 27, Haygood wrote in a testimonial that Redstone has helped her in some pretty remarkable ways.

“The credit union taught me how to budget my money. As a single mother, I had to learn a lot about finances,” she said. “I talked to their financial counselors several times. Redstone helped me complete my college education debt-free and provided me with financial education when I needed it most.’’

We recently spoke with Patricia Lloyd, Public Relations Coordinator at Redstone Federal Credit Union, who expounded on the institution’s growth.

“We still have a large percentage of our membership that is military or government contractors, but we continue to grow our member base outside of that area, too,” Lloyd said. “We currently have more than 400,000 members and are growing at a pace of about 2,600 new members a month.”

Many of the communities Redstone serves are in areas big banking institutions just don’t find profitable enough to make significant investments. Credit unions, on the other hand, aren’t beholden to shareholders or focused purely on profits, so they can serve areas where residents have fewer resources.

The challenge, however, is providing the financial products and services that members within these communities need. Redstone meets that challenge with some unique programs and offerings we’ll take a closer look at:

Stretch & Save Loans: These are short-term loans of up to $1,250 where 20% of the loan amount is set aside in a savings account to earn dividends. When the loan amount is paid off, the amount that was set aside is made available. This product can help members build an emergency fund and develop better saving habits.

Payday Alternative Loans: This type of short-term loan is intended to offer members a lower-cost alternative to the high-interest loans typically associated with payday lenders. The loan amount can be between $200 and $500, with a repayment period of up to six months.

Brighter Day® Savings Account: This account is designed to jump-start savings by giving account holders a bonus or cash incentive for opening a savings account. The bonus is frozen for six months and can’t be withdrawn. This account pays 5% interest — one of the highest-rate savings accounts anywhere — on up to $2,500. If members keep the account active for six months and meet other requirements, the cash bonus is theirs, and they’re eligible for another one.

“We have employees who are dedicated entirely to financial education,” Lloyd said. “They go out into the community and hold workshops and seminars at schools and businesses within the areas we serve.”

Redstone has worked with teachers and educators to develop financial literacy programs for the school system. This includes programs for elementary, middle, and high school students, as well as a program for incoming college freshmen as part of their campus orientation.

Free financial education seminars are also a big part of Redstone’s efforts. Redstone branch locations and local community centers play host to these seminars, which cover topics on a range of financial issues.

“We’ve held seminars on how to deal with the financial issues around the loss of a spouse,” Lloyd said. “We also had one on financial elder abuse, and numerous seminars on budgeting, reducing debt, paying for college, planning for retirement, and many others. Some of the more popular ones are around topics like how to create a budget.”

The Power of Credit Unions in Serving Communities

Credit unions have traditionally been applauded for meeting the financial needs of underserved communities. As member-owned organizations, credit unions have the ability to address the specific needs of individuals and to give them access to financial services they may otherwise be denied.

Redstone, through its products, services, and financial education programs, is helping many of its members break the cycle of financial illiteracy and poor personal finance habits. Credit unions, like Redstone, impact lives in valuable and positive ways with programs and services tailored to meet the needs of communities.

Perhaps Lloyd put it best when she told us Redstone Federal Credit Union is committed to helping its members by “meeting people where they are,” both financially and physically. After all, that’s what a credit union is for.