Cleo: How the Virtual Assistant Integrates with Your Accounts and Provides Real-Time Financial Insights Through Fun Interactions 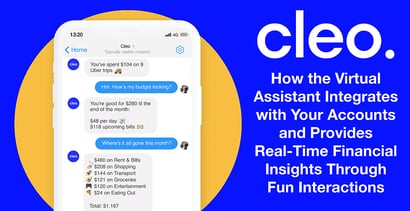 In a Nutshell: Even with smartphones and online banking, managing finances can still be a challenge. But, Cleo — an AI-based chatbot — is helping to make tracking spending and handling budgets easier, if not outright fun. The quirky bot interacts via Facebook Messenger through plain and often humorous language, like chatting with a friend. Cleo will gently (or bluntly, depending on your preference) remind you when you are spending too much and help you reach savings goals. And, the company behind it always places security as its top priority. In the near future, it will launch a smartphone app, giving users even more ways to interact with Cleo.

Even with quick access to our financial accounts via smartphones and banking apps, staying on top of finances can be a challenge. Just last month, my cellphone carrier notified me via text that it had to change the automatic draft date for my bill. I still don’t understand why.

When I noticed an extra chunk of money missing from my account early this month, I had to search back through my transactions to remember the new, earlier draft date.

There are tons of apps out there that offer to help manage our personal finances in various ways, but many come with a learning curve on the user end and offer a narrow scope of functionality.

Cleo is an AI-based chatbot that serves as a personal financial assistant to help users stay on top of their finances by saving money, tracking spending, and improving their budgeting skills. And Cleo doesn’t come with a learning curve. The chatbot can understand questions and commands in plain language and reply in the same way.

Cleo will be sure to let you know if you’re spending too much money on coffee this week because you forgot about the money you spent on the previous weekend’s surge-priced Uber ride.

We spoke with Cleo’s Content and Communications Manager El Winter to learn more about the virtual assistant, and how it keeps users in line with plain, often humorous language.

Using Cleo is like interacting with a friend, Winter said.

The chatbot primarily operates through Facebook Messenger but is also available via browser. Users can type in questions ranging from “What’s my checking balance?” to “How much did I spend on lunch last week?”

“Cleo’s a bolt-on messenger bot, so you don’t have to change banks,” Winter said. “She’s incredibly flexible. We have over 3,000 banks connected across the four countries where we’re currently live.”

Winter said accessibility and ease of use are key to Cleo’s success, and the chatbot has proven to be particularly popular among younger users. Cleo started in the U.K. and in 2018 the chatbot became available to U.S. users.

“In the last two months, we’ve managed to take on a large American audience and now we actually have more U.S. users than U.K. users,” she said. “It feels a bit strange since we’re based in London.”

Winter said Cleo stands apart from other financial apps because of the chatbot’s casual and often humorous language it uses to communicate with users. She said other chatbots can be much more serious and less engaging. “Cleo will tell you, ‘Look, you need to stop spending so much on coffee so you can go on that date next Friday,’” Winter said.

She said Cleo mixes in personality with intelligent data analysis that gives users a detailed overview of money and spending habits and makes managing money easier and more fun.

Users can connect any number of accounts to Cleo, including checking, savings, mortgages, credit cards, and see them all in one place. Winter said one of her favorite features is that Cleo can hide accounts from users, for example, users may ask Cleo to hide their savings account so they’re not tempted to take money out of it.

In addition to tracking spending and giving users important updates on their accounts, Cleo can also help users achieve savings goals. Winter said the chatbot can either help you reach goals through advice and feedback or through a more proactive approach.

“She can save money for you,” Winter said. “She’ll track your spending over the week, and, if one week you have some extra cash, she can automatically put the excess funds in a savings wallet.”

Winter said the company recently launched a Cleo Savage Mode that has been getting great feedback from users. The setting enables Cleo to be incredibly blunt with users.

“People have been responding really well to Savage Mode,” Winter said. “They like it when Cleo is mean to them.”

The company also offers a Cleo Plus plan that offers overdraft protection.

The use of artificial intelligence is on the rise and is having a particularly strong impact on the financial industry. AI is helping institutions operate more efficiently, save money, and facilitate higher quality user experiences — as is the case with Cleo and the team behind it.

“We have a really big data team that works on Cleo, and it’s continuing to grow,” she said. “We just brought on two really fantastic new data scientists to help make Cleo even better.”

Winter said Cleo is a complex program that is designed to become more intelligent based on its interactions with users updates from Cleo programmers.

“Basically every time Cleo can’t answer you, she’ll learn from it,” Winter said. “The bulk of that learning is done by Cleo herself through the AI, but we also have a community of 16,000 Americans who gave us a lot of great suggestions during our alpha testing phase.”

She said this leads to a combination of Cleo’s knowledge base being composed of the chatbot’s organic learning and the occasional joke or suggestion from its user base or team members. “It’s a nice medley of shared statistical genius and real people adding color,” she said.

Since the majority of Cleo users are now based in the U.S., Winter said the chatbot is picking up more American terms than before, and it’s even leading to the Cleo team learning new vocabulary words.

“Since we launched in the U.S., people kept asking if they could afford a sectional,” she said. “We were like, ‘We have no idea what that means!’ but we quickly learned that it’s just a kind of sofa.”

The Program Keeps Your Important Data Safe and Secure

Banking details are never stored on Cleo servers so a user’s banking data will never be breached from Cleo. The company uses a third-party called Plaid, which employs the latest security technology to connect to financial institutions, to handle the user’s banking details.

And, only the user and Cleo can view your transactions.

“When we pull any transactional data, we randomize and anonymize it so there’s no way to link it back to a specific account or any other identifying information,” she said.

Cleo also uses bank-level 256-bit encryption to connect the service with its servers.

“We also have a $250,000 insurance policy so in the event that there are any security slip-ups, you are completely insured,” Winter said.

The company also holds regular security audits and tests to assess its protocols, look for vulnerabilities, and determine if there are ways to improve.

Users should change their Facebook password immediately, according to the Cleo website. Additionally, the company advises to immediately delete conversations with Cleo. “Once the conversations have been deleted, all trace of your balances, budgets, and income are destroyed.”

Finally, the company suggests users should change their Cleo password as well to ensure that nobody can access their dashboard or view their finances.

Enhancing the User Experience Through a Proprietary App

Winter said the Cleo team is gearing up to launch an app version of its quirky chatbot in the near future.

“Our endgame was always to create a Cleo app, but, by building a version in Messenger first, we could work a lot faster than some other apps out there,” Winter said. “But we’re really excited to get the app out there, and we think Cleo has the potential to help so many people with their finances.”

Winter said Cleo has no plans to eliminate the Facebook Messenger version of the chatbot once the app is launched.