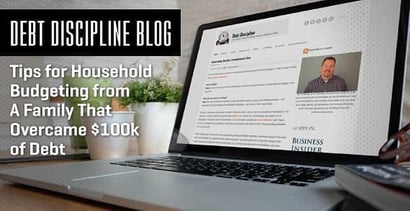 In a Nutshell: When Brian Brandow realized his family was more than $100,000 in debt, he turned to financial bloggers and experts like Dave Ramsey for guidance. Those resources were invaluable in educating and motivating his family to make a new financial plan, so Brian created Debt Discipline to chronicle his family’s financial journey. Now out of debt, Brian looks for opportunities to share tips with other families to help them reach their financial goals.

The thermometer was creeping up to 80 degrees again, which meant it was time for Brian Brandow and his family to plan their summer vacation and escape the Long Island heat. Whether it was to visit family or going to the beach, they had always gone away once the kids were out of school, but this year something was off. As Brian began to forecast their trip, he discovered there was no cash on hand and zero credit available for their annual family vacation.

Brian’s heart sank. He was the breadwinner and managed the finances, yet somehow those details had gotten away from him. His sadness turned to anger as he looked more closely at the numbers — he made enough that his family shouldn’t be living paycheck to paycheck, and he certainly didn’t realize the family’s spending had maxed out their five credit cards.

Once he tallied all the debt, the number overwhelmed him. Brian, his wife, and their three children were over $100,000 in debt, mostly from credit cards. He was humbled as he explained the situation to his wife and kids, but he had a plan. The family was going to make some changes to their finances to pull themselves out of this hole, starting with a change of summer plans.

In 2010, the Brandows had their first staycation and implemented new methods for managing their money. Today, they’re debt-free, and Brian walks readers of his Debt Discipline blog through the steps they took to reach their zero-debt goal. We spoke with Brian recently to learn more about how he managed budgeting for a family of five by involving the entire family, including his young children, in the journey.

Getting a Family on the Same Page with Finances is Possible

The hardest part of budgeting for families can be the simple act of saying no to their children. It can be heart-breaking to deny them over and over again, but Brian says he used those moments to teach his children a little financial lesson.

Brian Brandow and his family pulled together to get themselves out of debt.

Brian’s three kids were younger — an 8-year-old boy and a set of 12-year-old twins — when the family began to change the way they managed their money. However, he said one of his biggest goals, in addition to tackling the family debt, was to instill healthy financial habits in his children.

“If they take what I know now at 40 and apply it at 20, their future could be much different than mine was and [they can] have a much better start in their financial lives,” he says.

Another lesson came as the kids grew into teenagers and wanted smartphones. It was a topic they were interested in, which Brian says makes it easier to talk about money. He framed the idea of new cell phones as to consider how much time it would take for a minimum wage worker to earn enough for the initial cost of a smartphone as well as for the monthly bill.

“Their end goal was that they wanted a smartphone, but we were really having a money discussion,” Brian says.

Brian says his brain switched into emergency mode after he finally added up his family’s debt and saw it was six figures. Looking back, he wishes they would have nipped their spending sooner, but adds that the hardest part is getting started.

“It is going to take some sacrifice, and that’s really why I decided on the name Debt Discipline,” Brian explains. “Because it will take some discipline, and I think that’s the big part people overlook.”

“The biggest thing is the mindset change,” says Brian. “I think the math part is easy — you can sit down with a piece of paper or Excel or an app and do the math.”

The family tracked their spending for a few months by saving the receipts from every purchase, and they began to see trends and areas where they could make some trims to their budget. They stopped eating fast food as often, they canceled unnecessary subscription services like Sirius Radio, and they created a plan to get themselves out of debt in 50 months.

If you can make the change in your mind to commit to getting out of debt, Brian says the next steps come a little easier.

Brian tells us again how important it was for his family to track everything and suggests it as a first step anytime someone asks for his advice.

“Get your information down on paper — your income and your bills and all your debts,” says Brian. “You need to understand how much money you have coming in and how much you have going out each month.”

Getting organized is a two-part process, which begins with recording your spending habits and then analyzing those expenses as wants versus needs, according to Brian.

“Once you have everything down on paper and put it in the want or need bucket, you can very easily start to make cuts,” Brian says, explaining how his family created a budget.

He admits he was shocked by how much convenience costs cut into their finances, particularly with food. For working families, grabbing a quick meal out on the way to soccer practice from school — even once a week — can add up to a couple hundred bucks a month.

It may seem daunting, but Brian is convinced that there are always a few leaks to plug in any budget.

Make Finances a Family Affair to Reach Your Goals

While the first Brandow family staycation marked a financial problem in 2010, Brian and his family persevered by banding together to overcome the six-figure debt they had stacked up.

By keeping a record of their journey on his blog, Debt Discipline, Brian’s family was held accountable and was able to work toward the goal of getting out of debt.

“I thought it would be motivating for others to read our story: A family with children being in debt and being able to turn it around,” says Brian. “Hopefully, our story will impact someone who is in a similar situation as other finance blogs kept us motivated.”

Today, Brian continues to provide advice on budgeting for a family of five as they strive toward their next financial goal — increasing their net worth. For example, in one post, Brian details how he frugally planned for his daughter’s Sweet Sixteen birthday and his son’s desire for a car. He also discusses how to deal with being invited out while trying to save money and other money-saving tips, which can all be found on DebtDiscipline.com.