Amicable: Divorce and Separation Tools That Help Couples Move On Without More Debt From Legal Fees 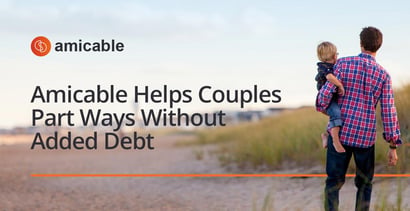 In a Nutshell: The separation and divorce process can produce plenty of anxiety and animosity — especially when lawyers get involved. But Amicable is an app that guides couples through those situations with resolution — not retribution — in mind. Amicable also helps minimize the threat of debt and other financial harm that often occurs when couples divide assets. The app is available worldwide and so far has been downloaded in more than 90 countries, and the company offers in-person coaching sessions in the U.K. to help couples reach faster, more equitable settlements.

There’s certainly no shortage of do-it-yourself advice and guidance online for couples who plan to get married. But when those relationships end in divorce, people often turn away from solving problems themselves and choose to get lawyers involved.

That was the issue Amicable set out to resolve in 2016 with its divorce and separation platform. Now, couples worldwide use the Amicable app and its other tools to peacefully sort out the financial, familial, and emotional aspects of parting.

Couples also put themselves in a better position to retain their mutual assets and avoid the threat of financial disruption, lasting debt, or even bankruptcy that often follows a difficult divorce.

Amicable also offers online services in the U.K., which include coaches who help couples collaboratively manage divorces. That works to their financial and emotional benefit, and that of their children, friends, and other family members.

Divorce is a legal procedure, and formal representation is sometimes necessary when relationship breakdowns occur. But not all divorces need to happen that way, and Amicable can help people manage their divorces cooperatively and privately rather than as a winner-take-all competition.

“In England, the average cost of using a lawyer to divorce is about £8000 pounds per person,” said Hannah Hodgkinson, Amicable Head of Marketing. “And the hidden costs of going through the courts and moving through the emotional and stress issues that arise was about 51 billion pounds per capita last time we checked. That’s higher than the annual defense budget in the U.K.”

Amicable arose out of personal need when Founder Kate Daly went through an acrimonious divorce. She had a professional background in psychology and coaching, and she was operating a personal consultancy to help couples emotionally prepare for parting. So she was acutely aware of the contrast between best- and worst-case divorce scenarios.

But as a sole practitioner, Daly’s help was limited. While attending prenatal classes of all things, she said she started envisioning the app with her friend, Pip Wilson, a tech entrepreneur. The new platform would automate and extend the techniques she used in her practice. The Amicable app grew out of those conversations.

“Kate realized the systemic problems in her own divorce that made the situation a lot more difficult and expensive than it needed to be,” Hodgkinson said. “And she knew that being emotionally prepared for conversations around finances and child care arrangements helped people deal more constructively with each other.”

The Amicable mobile app helps users work through what needs to be sorted when they divorce or separate.

Amicable is the world’s first family-friendly divorce app, and it provides couples with the tools they need to break divorce down into bite-sized pieces so they can communicate rather than delegate.

“People don’t get divorced often, so when they do, they may ask, ‘Where do I start?’ and ‘What on earth do I need to be thinking about?” Hodgkinson said.

Through the app’s structure, couples can discuss how they’ll separate their finances, create and share plans for co-parenting, and formulate agreements that help them achieve goals beyond the relationship. And Amicable stores all of that information, so couples can move systematically through their action items without losing anything in translation.

“You work directly with your ex to get your head around what needs to be sorted out,” Hodgkinson said.

Amicable users in the U.K. found the app useful, but they also wanted support to help them take the next steps. So Daly and Wilson expanded on their business plan to balance user-friendly tech with a human touch.

Now, the company employs divorce coaches who facilitate rather than mediate. That coaching is available through an intuitive diagnostic interface that arranges phone consultations and sets up eventual virtual meetings.

On its most basic level, Amicable can help users complete divorce or consent order paperwork at a competitive cost — without adding more debt. But coaches can handle all of the legal aspects of a parting and provide support for financial and child care negotiations along with other issues that may arise.

“The classic approach when you get divorced is to see a lawyer. That lawyer’s job is to fight for you as an individual and get as much as they can for you out of the marital pot,” Hodgkinson said. “This approach is needed when there are danger signs, for example, abuse or if one person is hiding assets.”

But as crucial as they are in some situations, competing lawyers can also be self-defeating when couples deplete their own funds for no particular reason. And zero-sum divorces often lead to unnecessary debt or other financial hardship. For some divorcing couples, declaring bankruptcy is a successful strategy.

“When communication is delegated to two separate lawyers, acrimony and costs escalate very quickly,” Hodgkinson said. “We help couples balance the math of how much they’re arguing over versus how much it’s going to cost them to get a resolution.”

The Amicable process leads to happier endings — or conscious uncouplings, to use a more modern phrase. In essence, Amicable helps couples part more efficiently, so both people emerge in better condition to deal with whatever comes next.

“The majority of our users have kids together, so we’re not negotiating the ending of a relationship but rather creating a new one and helping them transition from parents to co-parents,” Hodgkinson said. “That’s why it’s so important, even though it’s often difficult, to work it out together rather than split into different camps.”

Amicable meetings help people make arrangements quickly and empathetically by working with couples together. That can also lead to smarter financial outcomes and less debt for both parties.

“We say, ‘Okay, you have these goals for the future, and you’ve heard the other person’s views, too. Step two is understanding if those goals are realistic for you both. If not, it’s better to learn that now rather than halfway through the process,” ” Hodgkinson said. “The conversations from that point will be centered around those goals, rather than what’s happened in the past or what each person is ‘entitled to.’”

No one gets married planning to get a divorce, but when two parties agree that parting is the best course, Amicable creates a softer landing for all.

“Ultimately, divorce is an emotional journey,” Hodgkinson said. “And society gets it wrong when it prioritizes the legal over the emotional.”

The Arc of New Jersey on Money & Developmental Disabilities

Recognizing the National Museum of Mathematics for Affordable Fun