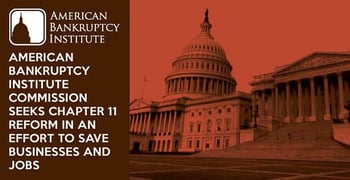 In a Nutshell: The bankruptcy code currently in use in the United States was written into law in 1978, and many observers believe it’s outdated. Following an extensive three-year study, the American Bankruptcy Institute (ABI) concluded that reforms are needed to the way Chapter 11 bankruptcy is implemented. In light of today’s fully leveraged companies and high levels of secured debt, the Institute found growing concerns that bankruptcy law favors creditors and rarely gives business owners a voice in the futures of their companies. In March of 2018, Bob Keach, Co-Chair of the ABI Commission to Study Chapter 11 Reform, presented the commission’s findings to a Senate Judiciary subcommittee, testifying to the impact of current laws on businesses and jobs. To date, the Senate has not taken up reform legislation.

Throughout recorded history, individuals who couldn’t pay their debts have been treated harshly by the legal systems under which they were governed.

The Greeks and Romans were notoriously punitive in their treatment of insolvent debtors, sometimes going so far as to allow the collection of actual body parts as repayment of a debt. And debtors’ prisons existed well into the 20th century, even among Western countries that weren’t charging an arm and a leg in repayment.

In the United States, early attempts at passing bankruptcy laws to protect the rights of debtors were short-lived and ineffective. However, as the practice of extending individual credit became more a part of our nation’s economy, lawmakers saw the need for a more pragmatic system of bankruptcy protection. The punitive approach to the treatment of insolvent debtors as criminals was causing harm to commerce.

In 1898, Congress passed a bankruptcy law that finally held, and it remained in effect for 80 years. While not perfect, this law gave debtors more rights and protections than they previously had had.

The Bankruptcy Reform Act of 1978 introduced reforms that modernized bankruptcy law, and it remains the basis for our current bankruptcy code. This reform took into account the increased use of credit cards by consumers, the growing reliance on borrowing for businesses of all sizes, and the overall levels of debt across our economy.

But businesses have, of course, continued to evolve. Increased levels of secured debt and very high leverage have changed the way companies are structured, yet the 1978 bankruptcy code has remained largely unchanged. The American Bankruptcy Institute (ABI) hopes to change that, pushing for Chapter 11 reform through new legislation.

Bob Keach, Co-Chair of the ABI Commission to Study Chapter 11 Reform, told us about the important role the bankruptcy code plays in the health of the job market.

In March of 2018, Bob Keach, Co-Chair of the ABI Commission to Study Chapter 11 Reform, testified before the Senate Judiciary Subcommittee on Oversight, Agency Action, Federal Rights, and Federal Courts, presenting the findings of an extensive three-year study on the subject.

“The commission report was issued in 2014 and contains a few hundred pages of reform suggestions,” Keach told us in a recent conversation. “One that I testified to in front of Congress recently is to reform the way Chapter 11 works for small to middle market enterprises (or SMEs, which are businesses with $10 million or less in assets or debt), which represent 90 to 95% of all companies that file.”

Chapter 11 Laws Have Not Kept Pace with Business Evolution

Chapter 11 of the bankruptcy code is intended to help a business restructure its debts and obligations during reorganization.

If a company can no longer meet the payments outlined in its debt structure, Chapter 11 gives it the necessary time to renegotiate the debt with its creditors, which allows it to stay afloat. If the creditors agree to this renegotiation, the company gets to continue business operations, although the creditors and the bankruptcy court must approve most business decisions.

At least, that’s the way it’s supposed to work.

In addition to being Co-Chair of the ABI Commission, Keach is also a Fellow of the American College of Bankruptcy and a past President of ABI. As an authority on the bankruptcy code, we asked him to explain just why reform of Chapter 11 laws is needed now.

“The reason reform is needed is that, due to changes in business structures, such as the rise of secured debt, claims trading, and some other things, Chapter 11 really wasn’t working for SMEs,” he said. “If you have no equity space in the company, everything is leveraged by secured debt. It’s nearly impossible for the existing owners of those companies to retain their interest in the company. Filing Chapter 11 has become, in effect, an assembly line toward the sale or a liquidation of the business.”

Removing reorganization as a possibility for most companies that file Chapter 11 means more of them are forced to cease operations and lay off workers. Since SMEs are collectively the largest group of employers in the country, this poses a big problem for workers and the economy.

You may be wondering what’s so different today in the way businesses are structured from 50 years ago when the Bankruptcy Reform Act was written into law.

“If you look at the typical company that existed in 1978, it would have secured debt, but it would also have what we call equity space — some value to the shares held by the owners of the company,” Keach said. “So, the company might be encumbered to the tune of 70% or even 80% of its value, but the remaining asset value would be unencumbered.

“Fast-forward to now, and investors — like private equity firms and others who might have taken shares in the company back in the previous model — are taking second-lien and third-lien notes, so that the entire capital structure consists of secured debt. What this means is that, if the company fails, all of its value goes to secured creditors, and there’s nothing left over. It’s not that we didn’t have secured debt before, but we didn’t have a fully leveraged capital structure, and that makes a world of difference.”

The 2012-14 study conducted by the ABI Chapter 11 Reform Commission involved commission members and more than 150 advisory council members. The commission held field hearings all over the country and had meetings or hearings in every judicial circuit in the US. It divided the issues that needed to be researched and given due diligence, and the proposals were then voted on by the full commission. Everything in the report is a result of unanimity and consensus.

“We took testimony for roughly three years — in essence, we did what Congress would do if they had the time and resources and inclination,” Keach said. “It was essentially a comprehensive study — factual, legal, and otherwise — which then resulted in our deliberating over proposed reforms for each of the issues.”

The resulting proposal, as the ABI commission report states, is to make key changes to the bankruptcy code that would allow business owners to retain control and to make restructuring a viable option for them. Some of the proposed changes to the code would include:

“ABI doesn’t lobby legislation, so we can’t get out there and say do this or do that,” Keach said. “We can only suggest what might work. I think the next step would be if someone in Congress wants to sponsor the legislation and move it forward, so the work continues.”

The Next Steps Toward Reform

Congressional committees, like the Senate Judiciary subcommittee, frequently call for hearings on important issues. When Keach presented the results of the ABI study before the subcommittee, the study included proposed legislation for consideration by Congress.

One of the things Keach told Congress in his testimony was just how important this reform is in protecting jobs. In fact, he called the proposed legislation a jobs bill, due to the number of jobs it will save. He also told the committee that Chapter 11 reform is already paid for because the courts are there, the system is there, and it costs no more to make it work effectively to help save companies.

“I think everybody involved in the reform effort is inclined to be patient; we know it can take a while to get changes like this through,” Keach said. “Nothing moves through Congress quickly, and we were pleased to get the hearing before the subcommittee. We’re not expecting anything to happen this year, but maybe next year. We’ll see.”