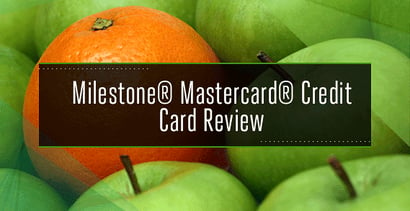 Take the Milestone® Mastercard®, for instance. Although it certainly doesn’t offer the low rates and high rewards of a prime credit card — it isn’t supposed to. Instead, the Milestone® is designed for consumers who need to rebuild credit, and it is a solid contender when compared to the field of subprime credit cards for those with poor credit.

In our Milestone credit card review below, we’ll offer our assessment of this credit-building tool, check out what consumers have to say about it, and — should it be an appealing card for you — look at how to pre-qualify for the card.

Our Take | Consumer Reviews | How to Pre-Qualify

At the other end of the range, few Milestone® Mastercard® cardholders reported having scores above 650, which makes perfect sense for a card mainly intended to be a credit-building tool. Once your credit score has rebounded into the mid- to upper-600s, most consumers will qualify for an entry-level prime credit card with more attractive features and can move on from the Milestone® card.

This chart from Credit Karma shows the credit scores of Milestone® Mastercard® cardholders.

For all of its strength as a credit-building card, of course, the Milestone® Mastercard® has its limitations, as is the case with any subprime credit-building credit card. To start, the card has a set credit line equal to $300, which cannot be increased. Not only does this help limit the temptation to overspend, but it also means your credit limit won’t decrease if you make a mistake.

The Milestone® card does charge an annual fee, which ranges from $25 to $75 in the first year and up to $99 in the second year, depending on your creditworthiness. Though this may sound high compared to a prime credit card with no annual fee, it’s competitive for a subprime card (remember, apples to apples, not apples to oranges).

Similarly, while the APR charged by the Milestone® Mastercard® won’t be the lowest rate on the block, its 23.9% APR is highly competitive against your typical subprime credit card, which can easily have an APR of 36% or higher. Avoid making late payments on your Milestone® card, however, or you’ll be stuck paying the much-less-competitive 29.99% penalty APR — indefinitely.

Consumer Reviews from Around the Web

Judging by the reviews abundant across the internet, many consumers have strong opinions on subprime credit cards, including the Milestone® Mastercard®. For the most part, those who understand the limitations inherent in having a poor credit score seem to appreciate the Milestone® credit card’s flexible requirements and credit-building abilities.

The card is great. They gave me a chance to build my credit. I make my payments before time, in full, and it is posted at the end of the day, so I have no complaints. I’m sure many will complain, but if they had great credit they wouldn’t be with Milestone! I use this card for groceries, which I normally would pay for with my debit card, so I pay it back as soon as the next week! — WalletHub Reviewer

Unfortunately, several reviewers write that they had to wait an extremely long time (more than a month) to receive a card in the mail. Making matters worse, a number of those customers were sent a bill — including an annual fee charge — before the card had even arrived.

Applied and approved, waited the normal two weeks, no card. Called and was told it takes three weeks, so I waited almost four weeks, still no card. I got a monthly statement with a payment due in the mail, but no card. Called once more and was told it would be two more weeks. So, basically, when you apply and are approved for the card, beware, you will not receive the card. But they will have already reported your account to the credit reporting agencies and will show on it that you have a payment due, so if you miss it, your score will be affected negatively and the whole plan of rebuilding your credit with this card goes out the window. — Credit Karma Reviewer

The Milestone® card’s set-in-stone credit limit was also a major bone of contention with a large number of reviewers. Multiple users said they were disappointed by the $300 credit limit, as well as finding the lack of regular credit limit increases a major drawback.

While I appreciate them giving me an opportunity to rebuild my credit, I can not recommend this card. Although my APR was 23.90, which is lower than two out of three of my Capital One Cards, there is no chance of increasing your credit limit over time. Each CO card, gave me a credit limit increase after making my first five or six payments on time, and then six months later. This card specifically states there are NO credit limits increases. Buyer beware. — Credit Karma Reviewer

Additionally, many consumers reportedly have issues with card payments taking a long time to post, especially when made online. Calling the company has also presented problems for some, with some callers having problems with customer service agents who communicated poorly in English.

You Can Pre-Qualify Online for the Milestone® Mastercard®

Biting into an apple when you expect an orange can be a tough mouthful to swallow — one of the many reasons to look before you eat. The same way, you need to know what you’re signing up for when you apply for a credit card. Don’t sign up for a subprime credit card expecting a prime deal, and know the details before signing the dotted line.

When compared to the range of subprime, credit-builder credit cards, the Milestone® Mastercard® is a competitive card with decent rates for its category. The card has an easy online application, and you can even check to see if you pre-qualify online before you fill out a full application. Pre-qualification uses a soft credit inquiry to estimate your approval chances without hurting your credit score.

Similar to most subprime credit cards, the Milestone® card has an annual fee that can get a little pricey, depending on your credit, and the credit limit is, well, limited. But the card has no minimum credit score requirement to qualify and a rate that isn’t highway robbery, making the Milestone® Mastercard® a solid option for those who need to rebuild credit.

Build Credit with a Credit Card in 3 Easy Steps

How Do Interest-Free Grace Periods Work?