The 20 Safest Small Cities for Your Retirement 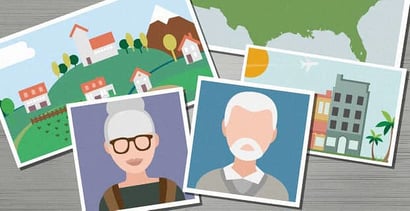 For someone with bad credit, figuring out retirement can be a tricky task. Chances are your finances are already battered from high-interest loans and whatever unfortunate accidents ruined your credit in the first place.

As such, you probably won’t enjoy (or afford) moving multiple times throughout your retirement. In fact, you’d much rather stay put and reflect on your life’s accomplishments.

Many retirees look for a town that’ll keep them safe — both financially and physically — while avoiding the hustle, bustle and danger of big city life. Who wants to spend their hard-earned retirement money being the victim of a burglary, robbery or assault?

Thinking about putting down roots somewhere new? A home loan or personal loan could help you make it happen.

There’s a good chance you and your wallet will be safe in these 20 small cities that have some of the lowest crime rates in the country.

West Bloomfield sits on on the outer edges of the Detroit metropolitan sprawl and is known locally for its abundant natural resources. According to the town’s website, there are 28 lakes, 150 ponds and more than 3,500 acres of protected wetlands and woodlands in the area.

In 1840, German farmers from Saxony established what would eventually become Arlington Heights, Illinois. The city has grown significantly since then, seeing the introduction of local landmarks such as the famed Arlington Park Racetrack.

Mission Viejo, California was almost the city that never was — developers deemed much of the hilly landscape “undevelopable” in the 1960s. However, some clever urban planning turned it into one of the safest and most desirable retirement spots in the United States.

Literally “Beautiful Yorba” in English, Yorba Linda, California sits along the Northern edge of the famed Orange County, just a stone’s throw (37 miles) from downtown Los Angeles. It was also named by CNN Money as one of the richest cities in the United States.

The residents of Laguna Niguel, California are nestled in the heart of Southern California. Not far from Los Agneles, San Diego and Laguna Beach, Laguna Niguel offers one of the best locations for retirement — close to big city activities but safe from big city crime.

Piscataway, New Jersey is one of the oldest European settlements in the state, dating all the way back to 1666 when settlers in Massachusetts began expanding westward into native Lenape lands. With its current low levels of crime, Piscataway will likely be around for the next 400 years as well.

The residents of Middletown, New Jersey are no strangers to prestigious titles — CNN Money named the township one of the top 100 places to live in 2006, 2008 and 2010. Let’s just hope the “evil clown” doesn’t ruin things.

This humble suburb of Boston boasts not only some of the lowest crime rates in the country but is also rich in historic and cultural resources. A portion of the Boston Marathon passes through the town every year, challenging runners with an infamous series of steep hills.

Fisher, Indiana has consistently won awards from various media outlets for its livability and the overall prosperity of its residents. We’re happy to say they can add one more accolade to their list.

Palatine, Illinois bills itself as a “real home town”, offering residents a quiet reprieve from the hustle and bustle of nearby Chicago. If you’re in the area in August, be sure to check out the town’s annual Streetfest.

Wheaton, Illinois started the same way as many other neighboring midwestern settlements — in the early 1800s, a business district sprung up around a newly built railroad station, eventually laying the groundwork for what would become a modest yet thriving town some 200 years later.

Although a small city, Carmel, Indiana has a thriving arts and leisure scene. Its art district is a population attraction for both residents and visitors alike. The city is also home to the state’s only Gran Fondo, a prestigious cycling event.

Parsippany-Troy Hills, New Jersey gets its name in part from the Lenape Native American phrase for “the place where the river winds through the valley.” Geography aside, Parsippany-Troy Hills has plenty of local athletic clubs to keep its residents healthy and happy.

Located on the western outskirts of Miami’s urban sprawl, Weston, Florida is full of high-net worth individuals, such as athletes. Many players from the Miami Dolphins football team and the Miami Heat basketball team have homes in the area.

While the area around Johns Creek, Georgia has been inhabited for hundreds of years by the native Cherokee and American settlers, the city itself is relatively new, just recently becoming incorporated in 2006.

Flower Mound, Texas gets its name from a 50-feet, 12.5-acre mound on the south side of the town typically covered in colorful varieties of Texas wildflowers. Residents are now at odds over whether shale oil drilling should expand in the area.

According to locals, George Washington climbed Ramapo Torne so he could monitor British ship movements along the Hudson River. Locals also claim Washington lost his watch during the climb — and that you can still hear it ticking even to this day.

(Editor’s note, 2/18/15: The FBI’s figures do not include the incorporated villages of Spring Valley or Suffren, which are listed separately in the report).

This study analyzed data from the FBI’s 2013 Uniform Crime Reports. Only cities with reported populations between 50,000 and 100,000 residents were evaluated.

We ranked each city based on the sum of their violent and property crimes divided by the listed population. The lower the statistical probability any given resident would become the victim of a crime, the higher (closer to #1) the city would appear on the list.