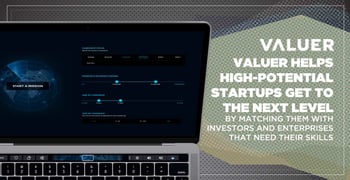 In a Nutshell: Plenty of startups have innovative ideas, but they often struggle to find the funding and support they need to grow. Valuer helps those emerging startups by connecting them with large enterprises that need their skills, ideas, and technology, and have the resources to help them thrive. The platform carefully matches entrepreneurs with corporate clients using data, AI, and extensive research from its team of agents and experts. That process provides startups with the partnerships they need to succeed and corporations with an effective way to modernize their capabilities.

Startups have always thrived on innovation, but as the pace of change speeds up, they often find themselves competing for funding and resources to stay in business. And the pressure on established enterprises looking to remain relevant can be just as intense.

That’s part of a process called “creative destruction,” and it applies to every industry — including financial services. Today’s rapid pace of corporate innovation and digital transformation means a broader market for new ideas.

That’s why Valuer was founded in 2017 to connect innovative startups and entrepreneurs with corporations that have the clout — and the resources — to help them carry out their visions.

Valuer Chief Marketing Officer Taylor Ryan said that a lack of “startup thinking” resigns many older businesses to status quo behavior when they need to kickstart their future. At the same time, startups with useful ideas may get caught up in competing for attention from enterprises and investors. Valuer connects those disparate groups for a mutual benefit.

Valuer Chief Marketing Officer Taylor Ryan spoke with us about Valuer’s worth to startups and enterprises.

“We match startups with corporations,” Ryan said. “We encourage startups to collaborate, potentially be acquired outright, or just work with large firms that have a ton of resources and are open-minded about working with small companies.”

For example, a bank that’s behind the curve in areas including blockchain or fraud detection can either perform the intricate and time-consuming internal pivot necessary to create the capability from scratch — or turn to the experts at Valuer.

“An enterprise can build its own version starting from nothing or work with a company that’s only a few years old that already has a proven track record,” Ryan said.

Valuer helps make those connections in the financial services industry, as well as many others, that strengthen both new and established companies. And it is continually looking for the next big ideas that will move enterprises — and startups — forward.

Valuer is the brainchild of a founder with expertise in data aggregation and two others who had experience in the corporate world. They started innovating a validation mechanism to help discover high-potential startups, and data forms the foundation of Valuer’s offering to enterprises.

“Everything you could ever want to find these days is online,” Ryan said. “There are some pretty standard spaces, and startups are constantly showing up there. We aggregate that information.”

But if Valuer only offered a list of startups to its clients, it wouldn’t be as useful. What makes its services so valuable to corporations is the human element, which starts with a worldwide network of more than 5,000 agents — or technology scouts. Those agents engage with startups via accelerators, competitions, and pitch events, assess their stage and category, and sign up the best ones for inclusion on the Valuer platform.

“Agents sign startups within specific spaces — and sometimes locations,” Ryan said. “We might put out the word that we’re looking for a tech startup in a particular category that is pre-seed, and that has a minimum viable product. We end up getting up to 100 responses within a week.”

An internal team of experts validates those efforts, adding insights from the corporate perspective. Valuer experts can attest to — and comment on — the potential of the startup’s talent, product, and business model, based on the knowledge they’ve gained from career experience in their specific verticals.

The result of that curation is a product that both receives the undivided attention of Valuer clients and ensures that the brightest startups receive the attention they deserve.

A Data-Driven Platform That Boosts Visibility to Corporations and Investors

Enterprises that aren’t interested in getting left behind often have many innovation irons in the fire, and they’re always looking for new ideas. And the concept of remuneration based on results brings them to Valuer.

“The reality with these large companies is that they have so many projects going on, and they’re not very adept at pivoting,” Ryan said.

The platform’s curated lists not only surface startups ready for potential cooperation with enterprises but also add location-based value for accelerators and unearths promising investment candidates.

“We can say with an element of certainty that one startup has more potential than another,” Ryan said. “Take one startup that has a single founder with three years of experience in fintech and another that has three founders with 25 or 30 years of collective experience. You can say with a level of certainty that most startups with a single founder and no other team are significantly disadvantaged compared to a founding team with lots of experience and more founding members.”

But experience isn’t everything. And, because the Valuer platform integrates interview data, news articles, human capital analysis, and updated investment statistics, it can result in a quicker path to a perfect match.

Helping Entrepreneurs Cut through the Competitive Clutter to Succeed

As businesses look to stay relevant for generations to come, Valuer bridges the gap between modern startup agility and the resources and needs of enterprises. And the human element is still at the core of what the platform offers clients, which can help the best and brightest entrepreneurs rise to the top.

Bootstrappers looking to emerge into the mainstream also face challenges including working capital and early profitability. Valuer provides a path for those high-potential startups to take off.

“Larger companies are putting a lot of energy into accelerators and innovation labs,” Ryan said. “Any small company that feels it has something in common with a large corporation has a lot more opportunity than what there used to be in terms of working with angel investors and VCs.”

All of that energy is changing the conversation between startups and their potential collaborators. Given all the clutter in the marketplace, entrepreneurs are increasingly viewing the prospect of partnering up — or even acquisition — positively.

“A lot of startups once saw corporations as threats or as a way to potentially lose key players on their team,” Ryan said. “But corporations have realized they need to play ball to make these exciting partnerships that eventually generate a ton of revenue and a lot of opportunities. They need to demonstrate value just as the startup does.”

Those are the corporations and startups that partner with Valuer — and both can benefit greatly.