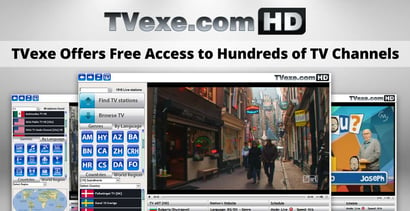 In a Nutshell: Cable subscriptions have been steadily declining over the past decade due to the alternate viewing options consumers now have access to. TVexe.com is one of these options. The platform provides access to more than 800 TV channels from around the world, at no charge. The freeware is easy to install on a current Windows PC and just as easy to use. The company values user feedback and has regularly updated and improved upon its services since the software launched in 2004.

I grew up during the heyday of cable TV. From the time I was a toddler to when I became a college graduate, the range of channels available went from about 20 to 200. I spent many evenings during my childhood watching my favorite shows or flipping through the channels to see what kind of strange gems could be found on the newest upstart stations.

But, in 2013, my wife and I decided to do away with our cable subscription. With all the extra equipment needed and added fees — which were often hidden away, deep in the fine print — cable couldn’t stack up to the emerging streaming options.

So, we cut the cable and haven’t looked back. We subscribe to several online streaming options and have an ample number of TV shows and movies to choose from, all while paying much less than the cheapest cable bill.

It turns out, we aren’t the only ones who decided to leave cable behind. According to Nielsen, the number of cable subscribers in the U.S. dropped by 11.6 million between the end of 2010 and 2018.

And it’s no wonder, with the transparent pricing and simplicity of streaming services.

TVexe.com is a robust platform that does away with prices completely. The freeware provides users with the ability to stream hundreds of TV channels from around the world for free from the convenience of their computers.

We recently had the opportunity to speak with Nir Romem, who founded TVexe.com in the nascent streaming days of the early 2000s and continues to facilitate the site as a developer today. He discussed the website’s origins, how the service works, and how the site continues to evolve 15 years later.

With Its Pioneering Software, the Platform was Primed for the Current Streaming Ecosystem

“The first TVexe TV software was developed during 2004, as a solution for a growing list of live TV stations on the web,” Romem said. “At this time, there were few similar software (if any) and Winamp was the major player in radio and TV streams.”

He said in those days — before the advent of YouTube, smartphones, and other modern streaming conveniences — there had been very few websites that listed live stations.

Cable subscriptions in the U.S. have been steadily declining over the past decade.

“The first version TV 1.0.0 listed around 300 live stations and was the first service to offer
listings by genre,” Romem said.

The software made some waves in the tech world when it was launched and received some early press, including a July 2005 article in PCMagazine.

By January 2006, TVexe.com had been downloaded by 1 million people around the world. And by the following year, the software reached 3 million downloads.

“The 3 million download mark is a very positive sign of the popularity of our flag product TV 2.0. Our goal is to give the users easy access to educational information, entertainment and news sources (…),” Romem said in an announcement at the time. “I’m also very happy to see such a great response from many people, those loyal users who keep on using our products as a learning and educational tool.”

Now, more than a decade later, the award-winning freeware continues to be a solid choice for Windows users.

TVexe.com users can now access more than 800 channels from all around the world, Romem said.

“It’s like a free trip around the world; seeing other peoples’ style of living, hearing new languages and music, and seeing world views and news,” according to the company website.

TVexe is Simple to Install and Use

Making the software accessible and easy to use has always been a priority for Romem.

“After a few million downloads worldwide, and a few minor facelifts of the UI, the software went through a major upgrade both in the UI and in the backbone infrastructure in 2012,” he said. “The entire TV Stations database was rearranged — over 1200 at the time.”

TVexe.com provides free access to more than 800 TV channels from around the globe.

He said the overhaul resulted in more information being listed about each TV station, including genre, country of origin, language, and links to the station website and its viewing schedule.

“This extra information on each station gives the user a much easier way to sort the desired station they would like to watch and gives the user easy access to more info about the station broadcast schedule, time zone, and free text search ability,” Romem said.

The software emulates a regular television set on the user’s PC via a high-speed internet connection for online global television reception, according to the TVexe.com User’s Guide.

“TV is an extremely easy-to-use application and anyone can find their own favorite stations on TV. No configurations or settings are needed. The intuitive, user-friendly interface will give you a pure plug ‘n’ lay experience,” according to the guide. “All you have to do is easily find your desired station, click on the station’s name, then sit back and relax.”

The freeware can be downloaded from the TVexe.com website. Android smartphone users can also download the freeware at TV2Mobile.

The freeware also includes listings for thousands of radio stations.

“Most of the feedback is very positive and done via the TVexe Facebook fan page,” he said.

By listening to user feedback, Romem is able to continue to make improvements in the platform based on user preferences and boost engagement with the TVexe.com audience.

TVexe.com prioritizes user feedback and continues to evolve the service in part based on user demands.

“Newer versions will include extra social media services — including links to the Facebook and Twitter pages of each station — new stations scroller on the main screen, and other features,” he said. “The mobile version will also be renewed with better support for newer broadcasting formats.”

Romem said any legitimate TV station is eligible to be listed at TVexe.com but in the event that a station goes off the air or the connection is not working, the software makes it easy for users to report the issue.

“One of the most important features of TVexe is the ability of the user to report a ‘dead’ link (station) with a click of a button without registering or any other process, just a click on the ‘Report Broken’ under each station,” he said. “This unique feature helps keep the stations database as clean as can be of ‘dead’ stations, which is the biggest problem of similar services.”

TVexe.com also offers customer support but recommends making sure the customer’s system is fully compliant with the freeware’s minimum requirements, including hardware, software, and internet connection. The company also recommends turning off all other bandwidth-demanding applications and restarting the PC to try to resolve any issues.

So, if you’re thinking about cutting the cable cord and are looking for reliable, free streaming options, TVexe.com may just be your solution.