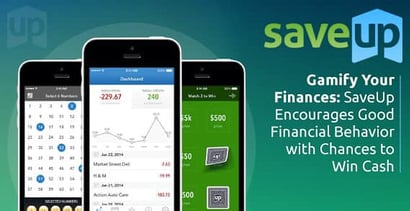 In a Nutshell: To help Americans save more and get out of debt faster, SaveUp has incentivized good financial decision-making through fun games that offer the chance of winning cash prizes. SaveUp users earn credits to play games for a chance at cash rewards simply by watching educational videos and linking financial accounts to track positive financial changes. Users will even be able to earn SaveUp credits by saving money through its continually updated iPhone app, which will soon offer 400,000 discounts at large, nation-wide retailers. Players can spend credits to choose numbers for a lottery with a $2 million jackpot, enter a cash drawing, or play an instant win game similar to scratch-off tickets. With nearly 2,500 winners to date, SaveUp aims to help users reach their financial goals — and rewards them for doing so.

My husband can’t drive by a casino without giving me “the look,” which is really more of a question. Want to go put $20 on black? Roulette is his game of choice, but he has rules for keeping himself in check (primarily, to ensure we don’t go bankrupt, we never add to the initial ante, which we cap at $20, even if we lose it all on the first spin).

Since it’s his only vice (besides my cookies), I usually oblige; plus, we’re not often near a casino. It’s the thrill of that potential win that turns his head and draws him in, and, I imagine, it’s like that for a lot of people.

SaveUp is capturing that feeling of excitement and channeling it for financial good. Instead of spending your money on an odds-against-you game of chance, the free SaveUp site allows you to earn credits for making good financial decisions. Whenever you increase your overall net worth — paying down your credit card or student loan debt, funding a retirement or savings account — SaveUp issues you credits, which can then be used to play chance games with cash prizes.

Answering the Biggest Question: How Does It Work?

Paul Burt, the chairman at SaveUp, generously gave us credits to test SaveUp ourselves after we spoke with him recently.

Paul Burt, Chairman of SaveUp, acquired the company in 2015.

On the phone, he details the process to play any of his site’s games — it’s just a few clicks — and he says sign-up to get started is quick and free for everyone.

There are three ways to win: a lottery, a drawing, or an instant win prize game. All are simple and straightforward to participate in, although the games were more fun and didn’t involve waiting for an outcome.

We were intrigued by the story of a player who, within a few days of signing up, won a $250 cash prize.

I’m already at level four and have earned more credits to keep playing, so, yes, it may be a little addicting.

Starting Out With SaveUp

When you first create a free account with SaveUp, you will be asked for minimal personal data — your name, email address, and a password. However, you will receive an additional 300 credits if you answer all 30 account questions about your financial situation, such as your monthly income and your types of debt accounts, and about yourself, such as your marital status and birthday.

These questions are not required nor is it required that you link your bank accounts with SaveUp, but again there is a big benefit to doing so. SaveUp rewards you with one credit for each:

I haven’t linked any accounts myself yet mostly because I haven’t sat down at home to login to all the financial institutions I am a member of. You can add accounts from any personal credit card and even from more obscure regional credit unions. It’s important to note that SaveUp does not have access or authority to do any more than read account information to issue you credits (and SaveUp cannot see or save your passwords for these accounts). The data SaveUp sees is secured through the same level of encryption found at banking institutions.

Now for the fun part: Once your account is set up, you can begin to play the games SaveUp offers and earn credits by watching two-minute financial videos. Paul says the bank of videos will soon be expanded, and you can earn 30 credits for answering a three-question quiz on the subject matter following the video.

You start each day with three free plays in your “credit bank” plus the credits you’ve accumulated by creating your account, adding details, linking your financial institutions, watching videos, and winning games. Once you have 100 credits, you can turn them into one play, but only five times a day. Every game, lottery, and drawing uses one play and 10 additional credits, so you won’t want to convert all your credits into plays.

I haven’t tried the jackpot lottery or the drawings because I find the games with prizes more fun (located under the “Prizes” tab on the site). The games are much like scratch-off instant win games, many of which include matching three of a kind to win a prize. I’ve won hundreds of credits to keep playing, and if you win a cash prize, SaveUp will send you a check within one business day.

The iPhone App Will Give Users More

During our call with Paul, he describes the upcoming updates to the iPhone app where users will be able to save even more cash. Thanks to partnerships with many big-box retailers, players will be able to redeem one of the 400,000 discounts soon-to-be available within the app right on the spot with credits they have earned by paying down debt and saving money.

Paul explains that the app updates are perfectly aligned with what SaveUp is all about — inspiring Americans to save.

“We’re really most concerned about getting America out of debt,” Paul says. “That’s my number one passion.”

One of the first things Paul mentions on our call is the tragic history of SaveUp that led to his involvement in the company. In 2010, Priya Haji and her developer Sammy Shreibati, a pair of Silicon Valley friends seeking to do social good, founded SaveUp. Priya’s untimely death due to a brain aneurysm meant the company was in need of new leadership, and Paul says he felt compelled to continue Priya’s mission.

After Paul acquired the company in 2015, he moved it near Chicago to his hometown of Lake Forest, Illinois. While there are 30 team members now, the partnerships Paul has secured means he will be adding an additional 100 employees, mostly for phone and email support, by the end of the year. We asked Paul if  these rapid changes affected the start-up culture of SaveUp.

“Well, our conference room is an Airstream trailer, if that gives you any idea,” says Paul with a chuckle. He goes on to describe how he put in 200 hours to polish the 28-foot vintage trailer. He also restored a smaller 16-foot trailer, called a Bambi, which SaveUp uses to visit colleges to promote the brand and educate students on saving.

Paul describes how he let the culture, which includes daily yoga and afternoon ping pong, evolve on its own at SaveUp rather than dictating it as many tech start-ups seem to do. “The Airstreams were my idea because it was just something that I loved, but they could have said it was ridiculous,” he says. “If you have fun where you are, you’re much more productive where you are.”

With the growing staff, Paul has rented a new 25,000-square-foot office in Downtown Chicago to accommodate his team and the Airstreams, but he’s happy to see SaveUp take off and to bring tech back to his hometown.

My husband still prefers Roulette, but I think I now have my own game of choice — SaveUp. Every time I play, there’s a little rush of endorphins as I hope to join the nearly 2,500 players who have won a cash prize. While I’ve only won credits so far, it has allowed me to keep playing for a cash prize, an exciting prospect.

The enticing idea that I could eventually win a cash prize for doing what I should already be doing financially — saving more and paying down debt — makes me want to overcome my laziness and link my accounts to earn more credits and chances to play (and win).

Is SaveUp doing what Paul says it was created to do, to inspire savings? By rewarding people like me to do the right thing, I would say so.

“People love it because they just paid down their credit card debt and won $50,” he says. “Our entire focus is to reward them for prudent and correct financial behavior.”

Lauren Keys
Lauren Keys has a decade of experience in writing and editing for publications including The New York Times, Entrepreneur.com, Gainesville Magazine, and many other media outlets. Known for having a treasure trove of savings tips at the ready, Lauren also regularly helps consumers discover the products and services that can best help them make their money go further. She believes an educated and measured approach is the most-effective route to financial wellness.
1.8k followers
6.6k followers
◄ 1 of 5 ►