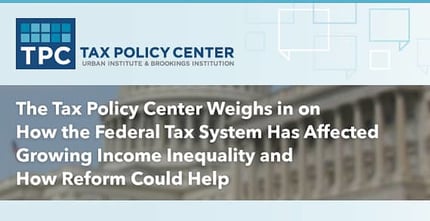 In a Nutshell: Income inequality is a popular talking point and political issue in the US, with the top 1% of the population collectively earning more money than the bottom 40%. Frank Sammartino, a Senior Fellow at the Tax Policy Center, recently shed light on the topic with a report designed to illustrate the widening gap and the role US tax policy plays in the issue. While the US tax code isn’t the sole culprit when it comes to wage gaps, Frank points out that some reform measures can be taken to help alleviate the problem. A Washington, DC-based, nonpartisan think tank, the Tax Policy Center routinely explores issues such as this one in an effort to provide essential research and analysis for policy makers, the press, and members of the public.

Depending on your politics and social standing, “the rich keep getting richer” is a common lament in America.

The Congressional Budget Office has statistics to back up that statement, at least somewhat. According to the CBO, the wealthiest 20% of society saw its income share rise from 43% to 53% between 1979 and 2013. Much of that gain went to the wealthiest 1% of the population. In 1979, that demographic retained 9% of all US income, an amount that rose to 15% in 2013 — which was more than the income made by the bottom 40% of Americans.

The US is not alone in this trend. Several countries in the Organization for Economic Cooperation and Development have reported a growing income disparity — but the gap is greatest in the US. One of the reasons for this is that the federal tax system, despite being overall progressive over the past few decades, has not mitigated income inequality, according to the Tax Policy Center, a Washington, DC-based think tank that provides analyses of tax policy.

According to a recent report titled, “Taxes and Income Inequality” by Frank Sammartino, Senior Fellow at the Tax Policy Center, “taxes have not exacerbated increasing income inequality, but have not done much to offset it.” The report is in a series designed to help follow the crucial tax bill debate under consideration in Congress.

The Tax Policy Center is a nonpartisan think tank that conducts research and analysis on issues such as business tax reform, the effectiveness of social policy programs in the tax code, state tax issues, and long-term implications of tax and budget issues. Its reports help the general public, as well as policy makers, journalists, and even presidential candidates, make sense of these issues.

The organization was established in 2002 as a joint venture between the Urban Institute and the Brookings Institution — two storied Washington think tanks. In addition to researching and commenting on pressing issues, the Tax Policy Center provides the public and the press with a Tax Policy Briefing Book, a primer on how the tax system works.

We recently spoke with Frank about factors driving the rise of income inequality, the ineffectiveness of the current federal tax system in equalizing income distribution, and future tax policies that could potentially positively influence income inequality.

Two Factors That Have Led to a Rise in Income Inequality

Income inequality in the US has grown incrementally since the late 1970s, despite a growth in Social Security, Medicare, and Medicaid, which provided the greatest boost in pre-tax income to low- and middle-income households, according to the Tax Policy Center Report.

Various factors contribute to this trend, and two of the main factors, according to Frank, are the increasing inequality of earnings, and the growth of income at the highest income bracket. Let’s take a closer look at each of these issues.

Wage Stagnation for Less Educated Workers is a Factor

Rapidly evolving technology has driven the demand for high-skilled labor — a demand that has been met with a slow-growing supply of labor. Still, those high-skilled jobs came with high wages.

The top 1 percent is approaching income share levels not seen since the 1920s in the US.

At the same time, the incomes of low- and middle-wage workers stagnated, Frank said. He offers the following reasons for this stagnation: a drop in the value of minimum wage, the declining strength of unions, and increased competition from workers in developing countries. All of these, however, are less important than the impact of technology, he added.

Super-Sized Salaries are Helping the Rich Get Richer

The rising salaries of the richest (the top 1% of income earners) are also driving income inequality. Historically, their incomes fell during the Great Depression and World War II, leveled off during the next three decades, and began climbing again in the 1980s. After temporary dips during the Recessions of 2001 and 2008, the income share of the top 1%, or even 0.1% has been on the rebound.

Frank calls these “super salaries.” According to one estimate, chief executive officers at major US companies typically make about 300 times what the average worker in the companies makes — compared to 30 times in 1970, Frank said.

“The exact reasons for this growth in compensation are not well established, but some factors include deregulation and growth of the financial sector, where compensation differentials are much larger than in the rest of the economy; the increased link between executive compensation and stock market performance; and changes in social norms,” Frank said.

A progressive taxation system, in theory, helps mitigate the effects of income inequality, and federal taxes are more progressive today than they were 35 years ago, according to the report. However, tax cuts during the administrations of both George W. Bush and Barack Obama “offset the equalizing effect of increased tax progressivity,” the report says. “After-tax income inequality has increased about as much as before-tax inequality.”

The Problem Goes Beyond the Tax Code

Tax reform to curb the income inequality gap is a multi-faceted issue. According to Frank, one solution is reducing or eliminating tax expenditures (in the form of special credits, deductions, or exclusion in the tax code). This would be both good tax policy, and an aide in reducing post-tax income inequality.

The Tax Policy Center’s Frank Sammartino concluded that income inequality could better be addressed by improving education and training, and boosting jobs and wages.

Frank comments that while raising the tax rate is feasible, “at some point raising the rate by a lot would cause those affected to devote time and resources to tax sheltering activity and could deter productive economic activity.”

He adds that closing the income inequality gap “is best done through means other than the tax code.

“These could include investments in education and training to boost the skills of more workers and policies to boost the demand for workers across many occupations, for example, significant government investment in infrastructure.”

Jon McDonald
With more than 15 years of journalism expertise, Jon McDonald stays up to date on emerging finance trends and news about the companies impacting the industry. He is most knowledgeable in the areas of budgeting, loans, and responsible credit use and is committed to bringing that experience to readers around the world. He has a passion for both writing and editing, and his articles have appeared in publications produced by The New York Times.
1.8k followers
6.6k followers
◄ 1 of 5 ►